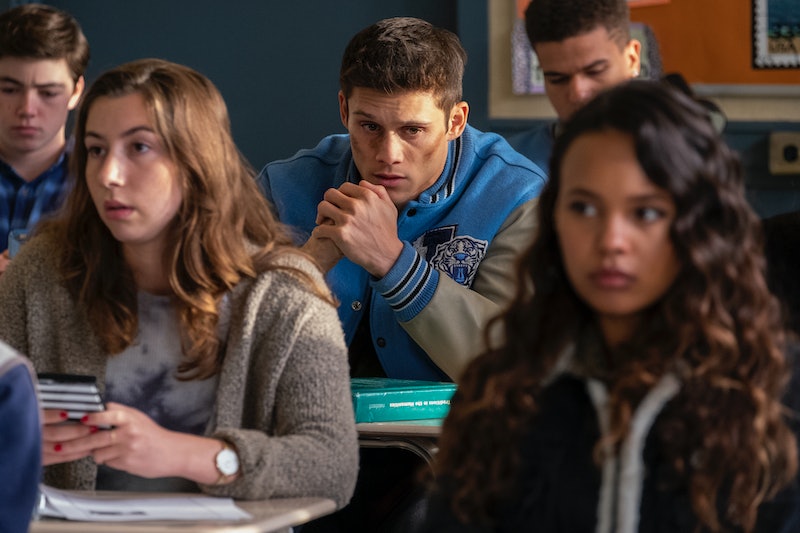 Spoilers ahead of all of 13 Reasons Why Season 3. Viewers knew heading into the new season that Bryce Walker was dead. It was in all the trailers leading up to the release. However, there was a second murder that fans may not have seen coming. Monty died in 13 Reasons Why Season 3, and his death became an opportunity for Ani, Clay, and co. to frame him for Bryce's murder.

Unlike Bryce's death, Monty's death was not shown on screen. It was hardly even mentioned, and it was never fully explained. Monty was in the county jail (after Tyler reported his sexual assault by him), awaiting his transfer to prison if found guilty. Presumably there would have been a trial to convict Monty unless he confessed, but things never got that far. He ended up dying in jail — presumably he was killed by another inmate.

Monty's death was foreshadowed by his father, who told him, "You know what they do to guys like you in [jail]? You're gonna get beat to sh*t, at minimum. They will beat you down." It's suggested that this is exactly what happened, and that it cost Monty his life. Even Alex was bothered by the news. "It's f*cked up about Monty," Alex said after he learned Monty's fate. "Poor Monty. I mean, I can't believe I’m saying that, but..."

While Monty's death is still a tragedy, the Liberty High kids use it as an opportunity to pin Bryce's death on him instead. Ani had found out from Justin about Monty's death before she gave her police statement. Justin had learned from Charlie, who'd learned from Luke, who had been told by drug dealer Tim Pozzi — who'd actually been in jail with Monty when he died.

Ani used that information to her advantage, spinning a wild tale that put Monty at the scene of Bryce's death (in reality, Monty was hooking up with Winston that night). Because the news of Monty's death wasn't public yet (the cops didn't know about secret-spiller Tom Pozzi), the police thought that there could have been no gain from Ani pinning the blame on Monty. So they believed her. It was easy to shut the case on Bryce's murder because Monty was also dead. No messy murder trial, just a nice bow-tied ending.

Or so everyone may think. Winston knows where Monty really was the night Bryce died, and he confronted Ani about it. "What did you tell the cops?" he demanded. "He didn't kill Bryce. He was with me." Ani tried to justify framing Monty by saying, "He was already gone." But that wasn't good enough for Winston. "He was a human being. He didn't deserve to die like that," Winston said.

Winston was clearly upset about Monty's death in general, but also that Monty had been blamed for Bryce's death. Winston could take what he knows to the police in Season 4 to try to clear Monty's name — thereby extending Monty's storyline. This show has already dedicated full seasons to explaining how and why people like Hannah and Bryce died, so Season 4 could be that for Monty. At the same time, though, Monty was killed offscreen and with only a brief mention. That may indicate that the show won't go into further detail about his death.

The show set up another secret for Season 4 that the students have to keep, and it also tied up any loose ends in Bryce's murder storyline. Of course, those loose ends could unravel in Season 4 if Winston decides to seek justice for Monty. Judging by the way people have talked about his death, it seems it was upsetting, and that may be just enough motivation for Winston to take matters into his own hands in the upcoming final season.

More like this
Netflix Shut Down 'Bridgerton' S3 Rumours About A “Very Dark” Storyline
By Bustle
Shonda Rhimes Responded To The Surprise Exit Of A Day 1 'Grey's Anatomy' Figure
By Grace Wehniainen
'Succession' Season 4 Will Be An "Absolute Banger" According To Cousin Greg
By Bustle Staff
Taylor Swift Visited The 'Glee' Set For This Bizarre Season 5 Episode
By Grace Wehniainen
Get Even More From Bustle — Sign Up For The Newsletter
From hair trends to relationship advice, our daily newsletter has everything you need to sound like a person who’s on TikTok, even if you aren’t.