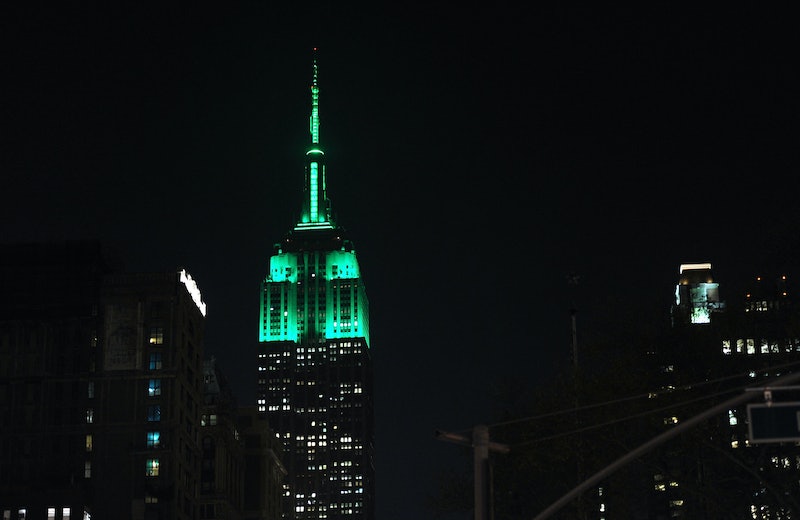 On Thursday afternoon, Donald Trump announced his decision to withdraw the United States from the Paris agreement on climate change — a decision that has since been heavily criticized by other political leaders both at home and abroad. Numerous American cities committed to upholding the conditions of the agreement even if the country did not. Meanwhile, foreign leaders ranging from Canadian Prime Minister Justin Trudeau to French President Emmanuel Macron made it clear that their countries would not join the United States in abandoning the agreement. Additionally, in order to honor the Paris climate agreement, buildings lit up in green all over the world.

Multiple American cities lit up key monuments and landmarks in green to highlight their renewed commitment to the terms of the Paris agreement, making it clear that they did not agree with the president's decision. But this particular act of resistance and solidarity was not limited to the United States; Mexico City, Montreal, and Paris all had landmarks light up in green as a response to Trump's decision.

These visual displays around the world highlight that many people remain committed to the fight against climate change, even as the president of one of the world's biggest carbon polluters chooses to disregard the problem at hand. Let's take a look at photos of some of the landmarks that lit up in green in the aftermath of Trump's announcement.

It is fitting that the city where the climate agreement was drawn up was among those to respond to Trump's announcement with a show of resistance. Paris Mayor Anne Hidalgo's tweet above depicts Paris' Hôtel de Ville, the city hall. The building lit up in green less than an hour after Trump announced that the United States would be withdrawing from the agreement.

Not far from the White House, where Trump made his announcement in the Rose Garden, the Wilson Building — which houses local government offices — also lit up in green. In a subsequent tweet, D.C. Mayor Muriel Bowser reaffirmed Americans' "obligation to protect our environment for generations to come."

New York City saw a number of monuments light up in green after Trump's announcement.

Both NYC Mayor Bill de Blasio and New York Gov. Andrew Cuomo expressed a renewed commitment to the Paris agreement and the fight against climate change.

Boston joined New York City in lighting up its city hall — and to assuage concerns that such a display may actually be consuming more energy, WCVB Boston reporter Mary Saladna tweeted that "there are always LED energy-efficient exterior lights on city hall."

Like New York City, Mexico City lit up a number of its landmarks to honor the Paris agreement, including its city hall and the famous Angel of Independence victory column.

The fact that cities not only in the United States but also all over the world used these green lights to commemorate the Paris agreement hopefully reminds the Trump administration that the world is watching how the nation handles climate change. At the very least, it is reassuring to know that other cities and countries plan to make the Paris agreement a success.