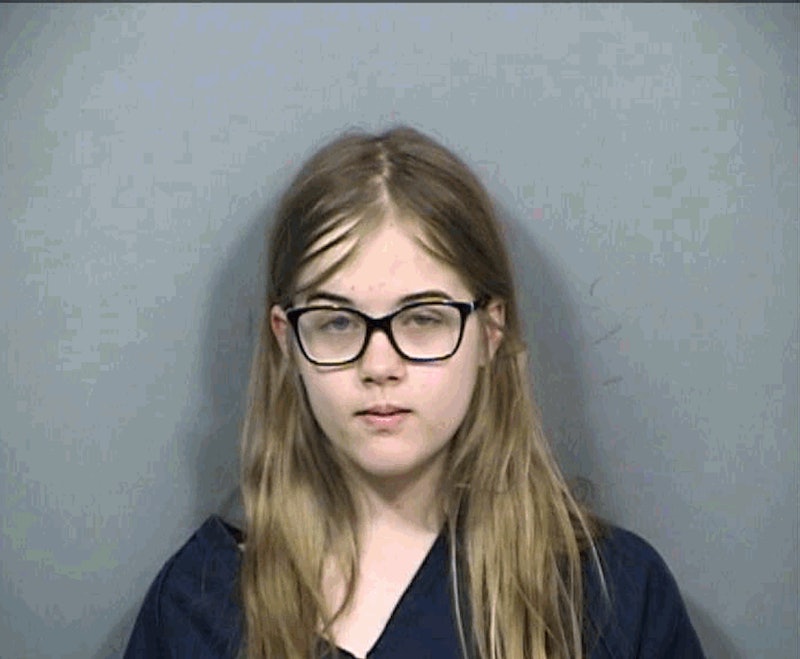 For a brief moment in May 2014, the nation's eyes turned toward the small town of Waukesha, Wisconsin amid what would become known as the Slender Man Stabbing. As reported by CBS, two young girls, Anissa Weier and Morgan Geyser, were sentenced in connection to the case. Since then, there haven't been many updates about Geyser — but that could soon change if she has a successful appeal.

To backtrack a little, Weier and Geyser both plead guilty to attempting to murder 12-year-old Payton Leutner. Investigators told CBS that, after luring her into the woods, Geyser stabbed Leutner 19 times while Weier urged her on. The girls, who were also 12 at the time, told authorities they did so as a sacrifice to Slender Man, a fictional horror character they wanted to prove was real.

Both Weier and Geyser were sentenced in 2017 after being found not guilty by reason of mental disease or defect. Weier was sentenced to 25 years of institutional care in a mental hospital, while Geyser was sentenced to 40, as reported by the Milwaukee Journal Sentinel. According to Fox 6, Weier is currently at the Winnebago Mental Health Institute. Geyser was also held at Winnebago during the trial, but per USA Today, experts testified that she should be sent somewhere that could provide specific treatment for schizophrenia.

Geyser was 15 years old when she was was sentenced, meaning that by the time she is released, she will have spent well over two-thirds of her life within the care of mental health facilities. However, Geyser is now appealing the case. As reported by BBC News, Geyser was initially tried as an adult, but her lawyers have filed an appeal arguing that she should have been charged for second-degree murder in youth court because she believed Slender Man would hurt her family if she didn't kill Leutner. They also claimed that when she agreed to be interviewed by detectives, resulting in her confession, she "wouldn't have been able to understand what rights she had given up." If she'd been tried as a juvenile, BBC notes, Geyser would have received a max sentence of three years and then been supervised until she was 18. Courthouse News reports that the state's response to the appeal is due on Feb. 4th, 2019.

In the past, Leutner's parents have been outspoken about how the attack has affected their daughter. According to the aforementioned CBS report, her mother Stacie sent a letter to the judge overseeing the case ahead of Weier's sentencing, writing that, "she will struggle with the events of that day and physical and emotional scars it left for the rest of her life." She added that Leutner slept with scissors under her pillow for months and still keeps her bedroom windows closed and locked for protection. However, Leutner's family doesn't appear to have publicly commented on the possibility of an appeal for Geyser.

The news also comes just before the release of Slender Man Stabbing: The Untold Story, a Reelz documentary set to re-explore the case. It's unclear what will happen with Geyser moving forward, but certainly, the film will bring renewed attention to what happened.

More like this
Here's What Jeffrey Dahmer's Dad Has Said About His Other Son, David
By Grace Wehniainen
Where Is Lionel Dahmer Today? Jeffrey Dahmer’s Father Reflected On The Serial Killer’s Death In 2020
By Brad Witter
Alleged Cult Leader Larry Ray Is Awaiting Sentencing Following His Conviction
By Brad Witter
Glenda Cleveland Died 2 Decades After Trying To Turn In Neighbor Jeffrey Dahmer
By Brad Witter
Get Even More From Bustle — Sign Up For The Newsletter