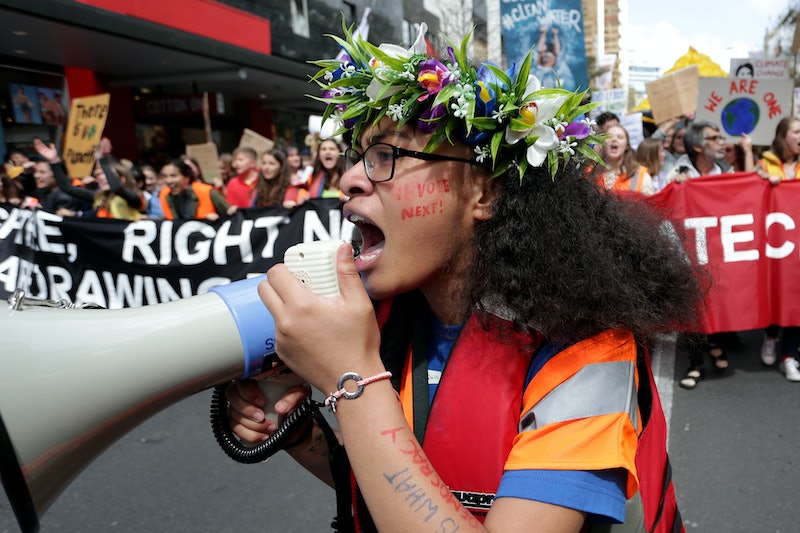 Young people say they're not leading the climate movement to be inspiring — they're leading it because they want to have a future. In a new survey Bustle Digital Group conducted in partnership with Pollfish and She's the First, 30% of women and girls between the ages of 14 and 22 chose "preserving our planet" as one of three issues most important to them, second only to education. The overwhelming majority of the 2,000 Gen Z respondents also have climate anxiety, and activists tell Bustle that makes sense, because they're the ones who will have to face and address the catastrophic effects of climate change in the next two decades.

On Sept. 20, more than 2,500 climate strikes were held in more than 163 countries as part of the Global Climate Strikes, according to Vox. Sixteen-year-old Swedish climate activist Greta Thunberg led the protests, along with other young people who are spearheading local and global organizations working to protect people and the environment.

In a landmark report released in October 2018, climate scientists with the UN Intergovernmental Panel on Climate Change (IPCC) wrote that world leaders only have 12 years, or until 2030, to take action to prevent the planet from warming more than 1.5 degrees Celsius, or 34.7 degrees Fahrenheit, between the pre-industrial period (1850-1900) and 2030. The planet has already warmed about 1 degree Celsius, according to the UN.

Jamie Margolin, the 17-year-old founder of youth-led climate organization Zero Hour, says Bustle's survey results aren't surprising to her. "We're given dates like 2030, 2040, 2050 for when all sorts of horrible things are going to happen," she says. "And we're going to be like in our 30s when this all goes down. Of course we're going to be worried."

The Bustle/She's the First survey found that 65% of Gen Z women and girls are “very” or “extremely” anxious about the state of our planet, and 90% of respondents are at least “somewhat anxious” about it. Almost one-fifth of respondents said that preserving our planet was the single issue that they think is least likely to be resolved in their lifetime.

Young people are receiving conflicting messages about their futures, Margolin says, which contributes to that anxiety. On the one hand, they are told to prepare for college and plan for the future, and on the other, scientists are predicting devastating effects to the planet that will happen in the next 10 to 20 years if world leaders don't take action to limit global warming.

"I try not to think about climate change, because it makes me so anxious I get physically ill and can't sleep at night."

For example, in May 2015, temperatures in India and Pakistan reached 117 degrees Fahrenheit, melting the pavement in New Delhi and leaving more than 2,300 people dead, according to the National Oceanic and Atmospheric Administration. Scientists say if the planet warms 2 degrees Celsius, those deadly heat waves could happen annually, along with droughts and other natural disasters.

Margolin, who just took the SAT and is in the process of applying to colleges, says the personal essays she has to write for her applications include questions like "What do you want to be when you grow up?" and "What are you going to plan?"

"While we're being asked and kind of promised this lie of this future that does not exist, we're also simultaneously being fed news that the world is ending, the climate crisis is here," she says.

While the Bustle/She's the First survey found that 64% of women and girls are "very" or "extremely" concerned that their hometown will become harder to live in due to climate change, that number spiked among young women of color, to 71%. It's lower for white respondents, with 57% saying they are very or extremely concerned. Hispanic women and girls are the most worried about their hometown, at 77%, and they are also the most worried that they will be affected by a natural disaster due to climate change.

"The facts are that the people who are the most marginalized by society also feel the worst effects of the climate crisis," Margolin says. She points out that coal plants in the United States, for example, have historically been located closer to majority Latino neighborhoods and further from majority white neighborhoods.

"When black and brown kids and Hispanic kids are feelings these effects of the pollution and everything that is happening the worst, then of course they're going to be more worried because they know [climate change] is not just some distant thing," Margolin says. "They know that they're on the front lines."

"Most of the honey I buy is local. I try not to think about climate change, because it makes me so anxious I get physically ill and can't sleep at night. So the changes I make are small - I'm not proud of that. I'd like to do more," one respondent wrote in the survey, capturing the anxiety a lot of young people feel when it comes to taking action on climate change.

Zina Precht-Rodriguez, who is 23 and works in the communications department of Sunrise Movement, a youth-led organization that advocates for political action on climate change, tells Bustle that in her personal experience, anxiety about the climate crisis is debilitating because many young people feel like there's nothing they can do to make a real difference. She encourages people to act on that anxiety, and reach out to a local grassroots environmental organization and attend a local climate demonstration.

"The way that we got into this climate crisis was not because one person left their light bulb on for too long."

Making sure your voice is heard "not just with respect to the consumer choices you make, but with respect to the politicians and power that we're pressuring, is actually an extremely empowering act of defiance," Precht-Rodriguez says. "And it's also a part of building community around this anxiety as well ... we know that we are building power, we're building something we call people power."

One thing Precht-Rodriguez says she wished she knew about the respondents is what they're doing to cope with climate anxiety. She believes that many of the people who feel that anxiety are civically engaged in some way. "As constituents, even if you're a young person, you have the power to show up in your local community, become engaged, become empowered through that engagement," she says.

A Washington Post-Kaiser Family Foundation poll released in September found that about one-quarter of their poll respondents between ages 13 and 17 reported "engaging politically on the issue of climate change (by participating in a protest or school walk-out, or contacting a government official)."

Precht-Rodriguez says, though the majority of Gen Z-ers are anxious about climate change, "it is important to tell this story of then how they are showing up in community and in real political force."

Margolin also notes that individual actions Gen Z is taking in response to the climate crisis shouldn't be the main focus for helping reverse climate change. "The way that we got into this climate crisis was not because one person left their light bulb on for too long," she says. "It was because massive corporations were causing death to all life on earth." When a solution to the climate crisis is being pitched as "you can just tweak a few things here and there, then you know that that's the ultimate flaw," she says.

The Bustle/She's the First poll delivers a powerful message, and it's one that Gen Z wanted to get across to older generations through the Global Climate Strike: "What this should signal is that their time is up," Margolin says. "They have two choices. Either they do the work that is crucial to save life on earth or they get out."