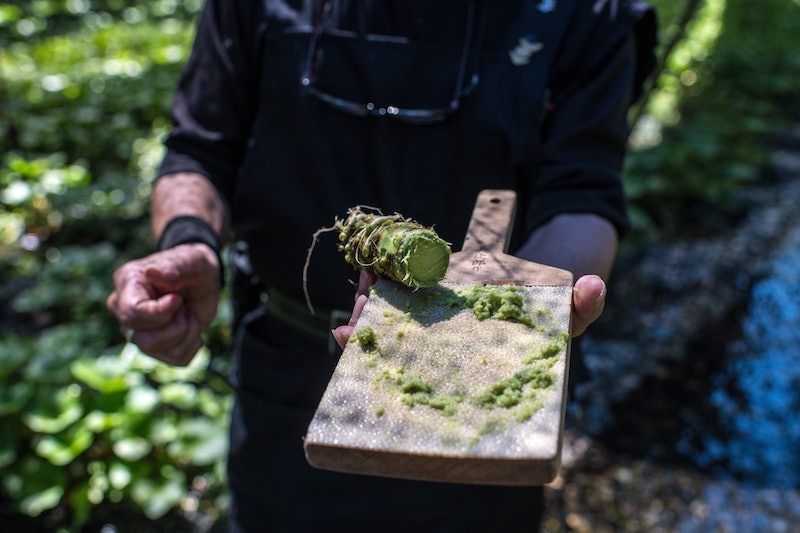 You’re going to want to sit down and hold onto something steady when I break this news to you: you have probably never actually eaten real wasabi. I know. I’ll give you a second. Your reality has been shaken and all those viral videos of babies eating wasabi are now tainted forever. It’s okay. We’ll move past this somehow.

Let’s start with what you’ve actually been eating. When I say “wasabi,” you’re probably thinking of that green paste that comes alongside sushi. It’s pungent. It’s spicy in a very specific way. It, unfortunately, is not real wasabi. That green paste is a mix of a few different things. Typically, it includes a combination of sweetner, soybean oil, horseradish, and a very small percentage of wasabi, typically less than one percent. As someone on Twitter put it, “It’s like white chocolate ... which isn’t chocolate at all.”

A video by Business Insider showing the process of how real wasabi is grown and made is making the rounds on Twitter. If you have six minutes and want to feel betrayed, confused, like your whole life is a lie, and learn what actual wasabi is, it’s well worth your time. But don’t say I didn’t warn you about residual “questioning everything you are and know” feeling you will get afterwards.

According to Esquire, 90 percent of the time you’re eating “wasabi,” you’re actually mostly eating horseradish that’s been dyed green. (Moment of pause for your sense of reality and truth.) So, now that we know we’ve been living our lives next to an imposter wasabi, sharing our table and nasal passages with a fraud, let’s get into what wasabi really is.

Actual wasabi is extremely rare and, in turn, extremely expensive. It can cost up to $250 for one kilogram of wasabi. (That’s a little more than 2.2 pounds for those of us who still use the imperial system.) That's reason number one why it's hard to come by.

Wasabi is a plant in the Brassicaceae family. It’s related to plants like broccoli, cabbage, mustard, and horseradish, hence why the latter is often used as a wasabi dupe. Unlike its plant brethren, Wasabi is known to be one of the most difficult plants to grow.

One of the only places wasabi is found growing naturally is along Japanese mountain streams. Wasabi plants require very specific conditions to grow and thrive: constant running spring water, shade, rocky soil, and temperatures between 46 to 68 degrees Fahrenheit year-round. Wasabi is hard to grow, which makes it rare, which makes it expensive, which means you eat green horseradish and don't know until now.

Business Insider spoke to farmers at The Wasabi Company, the first European wasabi farm to learn more about the process of growing wasabi. The farmers initially only grew watercress but learned from a chef that wasabi plants require very similar growing conditions as watercress. So, they started growing wasabi as well.

The harvesting and processing of wasabi plants needs to be done by hand, which adds to it being a time-consuming and expensive product. Wasabi paste (real wasabi paste) is made grating the wasabi’s rhizome, which is kind of like its stem, against a fine microplane.

The spiciness we associate with wasabi has a very small time frame. Fresh wasabi’s spice and pungency comes from a chemical reaction at the plant's cellular level, which happens when you grate or paste the plant. That spice hits its peak at about five minutes after pasting it and will be completely gone after about thirty minutes. This is another reason why the green paste you get in your to-go sushi box isn't (and, really, couldn't be) real, fresh wasabi.

For those of us whose budget will likely never allow us to have the real deal, what does wasabi actually taste like? “Real wasabi has a complex taste,” Daio Wasabi Farm production chief Yujiro Hashimoto said, per Esquire. “There is a spiciness followed by sweetness.”

If it's any consolation, the spiciness and pungency is really similar to horseradish and the imitation wasabi you've been eaten. So, if it's that nose-hair-burning sensation you're seeking, you can rest assured that you've definitely tasted that.