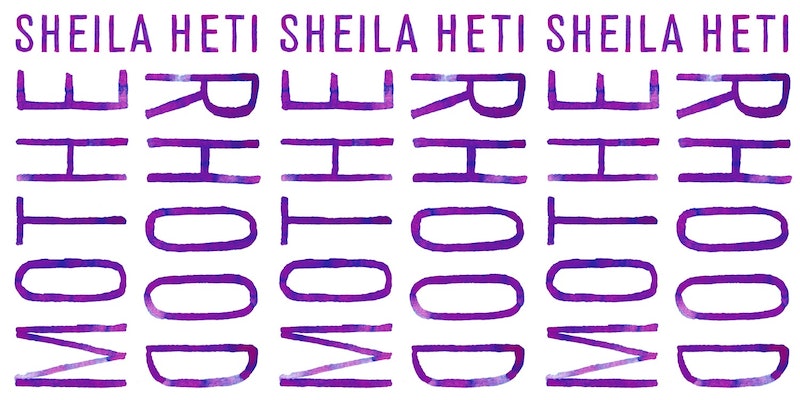 There is one thing certain to color Sheila Heti's work: uncertainty. And so Heti's latest novel, Motherhood, comes as no surprise. Her narrator (also named Sheila) is unsure if she wants to be a mother. She is unsure if she wants to be with her boyfriend, Miles. The only thing she can love and support, without wavering, is her writing. So she has birthed this book to ask every question that could possibly occur to her in this time of indecision.

Lucky for me, many of the questions Sheila asks have begun to present themselves in my own life: Is female reproduction the ultimate act of selfishness or selflessness? Can one lead a valid life without being a mother? Can one lead a valid life only without being a mother? Heti deploys a stream of consciousness style of prose, which often strikes gold — “If something can be debated endlessly and without resolution, it cannot matter” — but I also felt that she could write herself in circles.

At the very least, it is an interesting tug-of-war to bear witness to: A successful writer’s internal battle regarding what should be done with the rest of her life. She reaches into every crevice of her brain, her soul, her womb, to pull out some semblance of a driving force behind her decision to have or not to have children. Nearly one year ago, I had the perfect answer for when the conversation turned to children: “I’m waiting for that maternal instinct to kick in. So far it hasn’t, and I’m not sure if it will." Since then, my slack has loosened, but I wouldn’t say I have no inkling of wanting to mother. In the 284 pages of Motherhood, Sheila states probably hundreds of reasons for and against child-rearing, but one particularly stuck with me. In a conversation with a friend who is a mother, Sheila remarks: “I’m so jealous of mothers because whatever else happens, they have this person, their thing.” But her friend Sylvia replies, “That’s not right. I used to have things. I don’t have anything anymore. I don’t have my work… my daughter is her own person. She doesn’t belong to me.”

That sentiment is almost the perfect sum of why I might want to reproduce. I’ve heard people speak of a love you can never know until you have children, or a unfamiliar purpose that makes life feel new again. That all sounds nice, but my thoughts on motherhood are as follows: I don’t want to get to 45-years-old, when the thrill of a night out is long behind me, and realize I don’t have anything. If you have children, you have something. But according to Sylvia, you still won’t have anything.

Another writer, Rachel Zucker, in conversation with Heti, describes that precipice of a decision on motherhood as “one of those intolerable emotions." And so it makes sense that Sheila’s ramblings often border on intolerable. She starts off fairly articulate, or at least certain in her uncertainty (“I wished to have the time to put together a world view, but there was never enough time,” she says.). She weighs each side of motherhood deliberately. But she also whips back and forth recklessly. One moment she’s sure having a child will thrill her and the next she fears it will force her to give up everything she holds dear.

Throughout the novel, the question of motherhood is bolstered by related quandaries and stories of family, relationships, art, and mental illness. The theme of sadness remains a centerpiece along with Sheila’s obsession with fertility, and she tracks her tears along with her menstruation ("Low tear count today"). Perhaps because I am not quite in my 30s, as opposed to Sheila’s late 30s, or maybe because I too have a sad mother, but I found this discussion of sadness the most compelling. Sheila explains that for as long as she can remember, her mother has spent much of her time crying. In reference to this book she says, "It can be called a success if, after reading it, my mother stops crying for good".

Toward the end, when Sheila finally concedes to taking antidepressants, things change. The tears are gone. The anxiety is gone. “What kind of story is it when a person goes down, down, down and down — but instead of breaking through and seeing the truth and ascending, they go down, then they take drugs, and then they go up? I don’t know what kind of story it is.”

Sheila struggles with the fact that it wasn't her own hard work that made some of her sadness and anxiety retreat, but instead it was antidepressants. I guess it is a question many of us have: am I less of a fully-functioning human if I need these pills to function at my highest level? "Am I disappointed? A little bit, yes. I wanted my own magic to get rid of the pain, but I suppose one's private alchemy never works as well as drugs," she says.

What is unfaltering and charming about the way Heti writes is her utter unpretentiousness. She acknowledges certain insecurities and desires — to have big breasts, for example — but in a way that is so innately human. Her preoccupation with how the world sees her offers an earnestness that, spun between more nuanced interpretations of life and her art, connected me to Sheila in a way that felt secret, or just mine.

Some people simply know they want children. Whether that knowing comes from somewhere deep inside or from some tiredness, as Sheila puts it, “this fog of sleepiness that is my femininity” that discourages them from pushing back against the typical role of a woman, it doesn’t really matter. But for those of us who do waver, who still yearn to fill our lives with travel and sex, and also maybe that boundless love that people yearn for, Motherhood is essential reading. If only to assure you you’re not alone.