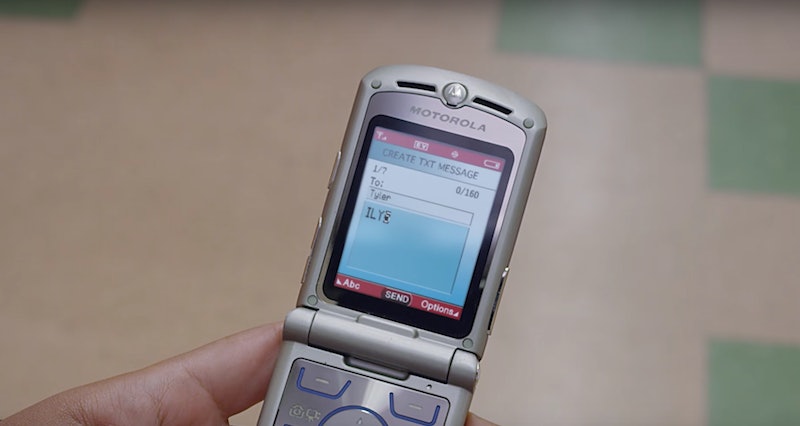 Excellent news for anyone who can’t live without the capabilities of their smartphone, but still misses the flip phones of the mid-2000s: A foldable smartphone might be coming from Motorola soon — and even better, it’s possible that it might actually be a foldable smartphone version of a RAZR. If ever there were a way to hit our tech dependency and nostalgia buttons all in one go… this is definitely it. And if the teeny, tiny bits of information we have right now — courtesy of an interview with one of Motorola’s higher-ups published by Engadget this week — are anything to go by, we might even see such a device arriving in just a few months.

Rumors that Motorola’s parent company, Lenovo, and Verizon Wireless had struck a deal to bring a foldable smartphone to the market began circulating in early 2019 following a Wall Street Journal report published on Jan. 16. Details were scarce, of course — they always are when you’re dealing with rumors — but according to the Journal, the phone was believed to be a RAZR that would bend in the middle with the use of a hinge; a patent filed by Motorola in 2017 suggested this design was in the works. It was to be a limited release, with only 200,000 units being made, and attached to a hefty price tag — about $1,500. The Journal reported that it could arrive as soon as February.

A February release obviously didn’t happen, given that it’s the last day of the month right now — but in an interview with Engadget published on Wednesday, Motorola VP of Global Product Dan Dery confirmed that the company “started work on foldables a long time ago” and “have been doing a lot of iteration” as they developed their plans.

As Engadget’s Chris Velazco noted, this confirmation is only “tacit”; Velazco’s description of “talking to Dery about Motorola’s foldable future” being like “peering through a light fog: you’re fairly sure of what lies on the other side, but the details are slightly obscure” is apt. What Dery did reveal is that, if Motorola were indeed developing a foldable smartphone, their “intention would not be to put the display on the outside” of the phone — despite the fact that Samsung and Huawei, who have also both been working on foldables, have been dabbing in that sort of design. While Dery said that having the screen on the outside is “the nicest and the purest way to go,” he also thinks the danger for damage is too great.

According to Dery, Motorola has also been experimenting with a dual-folding, z-shaped design, although it’s unlikely to be the company’s first foldable smartphone release; it’s too complicated to tackle right out of the gate. “We're looking into that too,” he told Engadget, “but definitely that's not going to be our first shot.”

Regardless, though, Dery told Engadget that Motorola has “no intention of coming later than everybody else in the market” — which, according to Velazco, suggests that Motorola’s currently hypothetical foldable smartphone could be arriving as soon as Summer 2019. Samsung’s Galaxy Fold is due out in April, while Huawei’s Mate X is coming sometime in mid-2019, so summer is a good bet.

Fun fact: Motorola is actually responsible for the very first flip phones, also known as clamshell phones, that ever hit the market: The Motorola MicroTAC 9800X, which arrived in 1989, introduced the design, while the Motorola StarTAC 85, released in 1996, popularized it. Although many manufacturers began producing flip phones after that point, none of them achieved the status as an icon that the Motorola RAZR did. The first RAZR model, the V3, was released in 2004 — and until the rise of the flat-screened smartphone a few years later, it was the reigning champ of the cell phone world. The V3 alone sold more than 130 million units, making it the world’s best-selling clamshell phone, according to the Telegraph.

After the iPhone, initially released in 2007, popularized both smartphones and touchscreens, however, flip phones in general — and the RAZR in particular — fell out of favor. A small contingent of folks continued to use flip phones well into the 2010s, specifically eschewing the always-connected, never-unplugged lifestyle that seems inseparable from owning a smartphone; even so, though, the flat, slab-like design of most smartphones thrived, while flip phones were looked on as a relic of the past.

Now, though, it looks like things are coming full circle: Between Motorola, Samsung, and Huawei, the foldable design of the mid-2000s is getting multiple updates as it meets the smartphones of today.

What hasn’t been confirmed yet is whether Motorola’s clamshell-style smartphone actually will be a RAZR. The name hasn’t been mentioned by Motorola or Lenovo personnel anywhere, so the possibility remains that the upcoming device won’t strictly be a member of the RAZR line. However, as many, many people have observed, the schematics seen in a patent held by Motorola that was filed with the World Intellectual Property Organization (WIPO) in late 2018 bear more than a passing resemblance to the RAZRs of old. The rounded edges and the lip on the bottom edge give it that same silhouette; it’s just missing the keypad, which updates the whole thing for the smartphone age.

Again, there’s a lot that hasn’t been confirmed yet. But signs are pointing to yes right now, as a technology-oriented Magic 8 Ball might put it, so keep your ear to the ground. Good news might be on the horizon — and it might be coming soon.