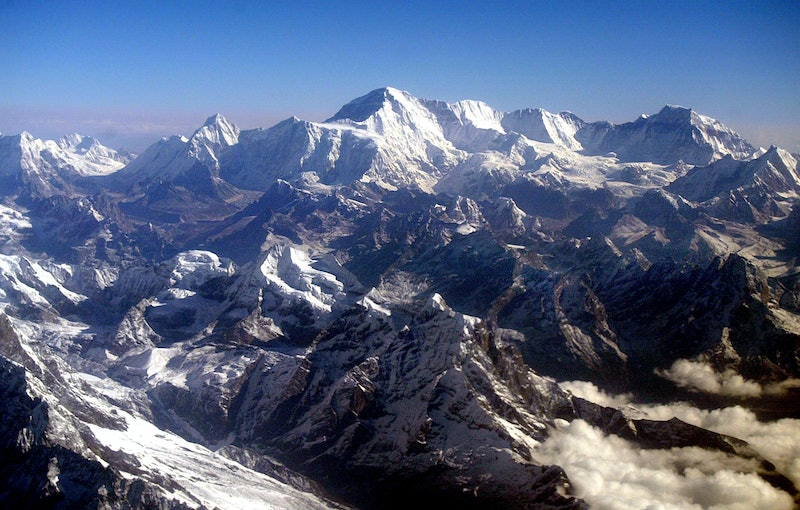 It's been known for some time that Mount Everest's glaciers are melting from climate change, and while that's alarming in and of itself, it's also produced an unexpected and grim side effect for mountaineers. According to CNN, Mount Everest's melting ice is revealing the corpses of climbers who've died while scaling the mountain.

"Due to the impact of climate change and global warming, snow and glaciers are fast melting and dead bodies are increasingly being exposed and discovered by climbers," former Nepal Mountaineering Association President Ang Tshering Sherpa told CNN. "Since 2008 my own company has brought down seven dead bodies of some mountaineers, some dating back to a British expedition in the 1970s."

A 2015 study published in The Crysophere, the journal of the European Geosciences Union, projected that as a result of rising global temperatures, the volume of several glaciers in the Hindu Kush-Himalayan region will decrease by 70 to 99 percent by 2100. In the long term, this will potentially have catastrophic effects on farming, hydroelectricity generation and water availability in the region, Down to Earth reported at the time.

In the short term, the melting glaciers of Mount Everest are uncovering dead bodies, as expedition operators on the mountain have discovered firsthand.

According to the Guardian and CNN, close to 300 people have died on the mountain since 1922, when the first death was recorded, and the majority of their bodies haven't been recovered yet. The melting ice is revealing more and more of these corpses, and some expedition operators told CNN that they feel they have an obligation to recover them from the mountain. That's no small feat, given that removing a dead body from the treacherous peak can cost as much as $80,000, according to the Guardian.

"Most of the dead bodies we bring to the towns, but those we can't bring down, we respect by saying prayers for them, and covering them with rock or snow," Tenzeeng Sherpa of the Nepal National Mountain Guides Association told CNN.

Asian Trekking founder Ang Tshering Sherpa said that one of the bodies weighed 330 pounds and "had to be recovered from a difficult place at that altitude."

"It was a Herculean task," he said. "But we, the operators, feel it is our duty and so whenever we find them, we bring the bodies down."

"I myself have retrieved around 10 dead bodies in recent years from different locations on Everest," a government officer who worked as a liaison officer on the mountain told the BBC, "and clearly more and more of them are emerging now."

According to the Guardian, most of the dead bodies have been surfacing at the Khumbu icefall, around halfway up the mountain, and at the final camp area close to the top.

"We are really concerned about this because it's getting worse," he said. "We are trying to spread information about it so that there can be a coordinated way to deal with it."