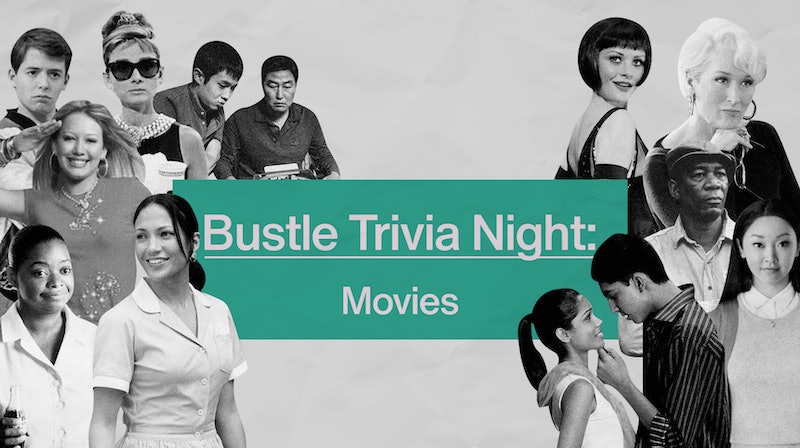 Has quarantine given you the opportunity to catch up on movies you were putting off seeing until you "had time"? Are you now flush with knowledge on high- and low-brow cinema? Well, gather a group of your friends and show them that your movie knowledge knows no bounds with this movie trivia night we put together that will test just about every type of film buff. (Yes, even those that "only watch Oscar-nominated films.")

Below you'll find five categories of 10 questions each: Classics, Disney Channel Original Movies, Rom-Coms, Oscar Winners, and Quotes. (Answers are at the bottom to prevent peeking.)

You can also download Bustle's Movies Trivia here and share it with your friends ahead of trivia night.

1) How many movies are apart of The Godfather franchise?

3) What is Morgan Freeman's character's name in Shawshank Redemption?

4) What insect appears on the movie poster for The Silence of the Lambs?

5) What is the name of the hotel in The Shining?

6) Name three of the seven von Trapp children in The Sound of Music.

7) What is the name of Quint's boat in Jaws?

8) What is Holly Golightly's cat called in Breakfast at Tiffany's?

9) According to Pulp Fiction, what do they call a quarter pounder with cheese in Paris?

10) Who directed Ferris Bueller's Day Off?

12) What happens to Cody on his 13th birthday in The Thirteenth Year?

13) What future year does Zenon: Girl of the 21st Century take place?

14) British band Five was featured in the 1999 movie Smart House. Which song of theirs do Ben and his friends dance to?

15) What are the names of the basketball-playing twins at the center of Double Teamed?

19) What was the name of the fictional band Nick, Joe, and Kevin Jonas were apart of in Camp Rock?

20) What Disney star has a cameo in High School Musical 2?

21) Cher Horowitz is based on which literary character?

22) What is the campaign slogan Benjamin Barry comes up with for the DeLauer Diamond account in How To Lose a Guy in 10 Days?

23) What magazine does Hugh Grant's William Thacker claim to work for in Notting Hill?

24) Who does Dermot Mulroney end up with in My Best Friend's Wedding?

25) Put the following in order of release, from oldest to newest: Maid in Manhattan, Monster-in-Law, The Wedding Planner

27) 10 Things I Hate About You is a loose adaption of which Shakespeare play?

29) What are the names of Lara Jean's sisters in To All the Boys I've Loved Before?

30) What is on Mark Darcy's infamous sweater at the New Year's party in Bridget Jones's Diary?

31) As of 2020, Kathryn Bigelow is the only woman to have won an Oscar for Best Director. What Best Picture winning film did she earn the title for?

34) What Oscar-winning film is inspired by the 1979 Canadian Caper rescue mission?

36) Moonlight won the Oscar for Best Picture in 2017. What movie was incorrectly announced as the winner at the ceremony?

37) In Forrest Gump, What book does Forrest place a white feather in?

38) What 1973 movie did Tatum O'Neal become the youngest ever Oscar winner for?

39) What movie did Meryl Streep win her first Oscar for?

40) What is the only movie sequel to have ever won Best Picture?

2) It's a Wonderful Life

18) Even Stevens and Lizzie McGuire

33) For the double murder of her husband and her sister

47) "Halle Berry in her Catwoman suit," The Hangover

More like this
'Doctor Who’s New Star Is Already Huge On TikTok
By Maxine Harrison
How Ncuti Gatwa's 'Doctor Who' Casting Impacts His 'Sex Education' Future
By Nola Ojomu
Lisa Marie Presley Reviewed Baz Luhrmann’s ‘Elvis’ Movie On Twitter
By Grace Wehniainen
What’s New On Netflix: A Victoria Justice Rom-Com & The Return Of David Letterman
By Arya Roshanian
Get Even More From Bustle — Sign Up For The Newsletter