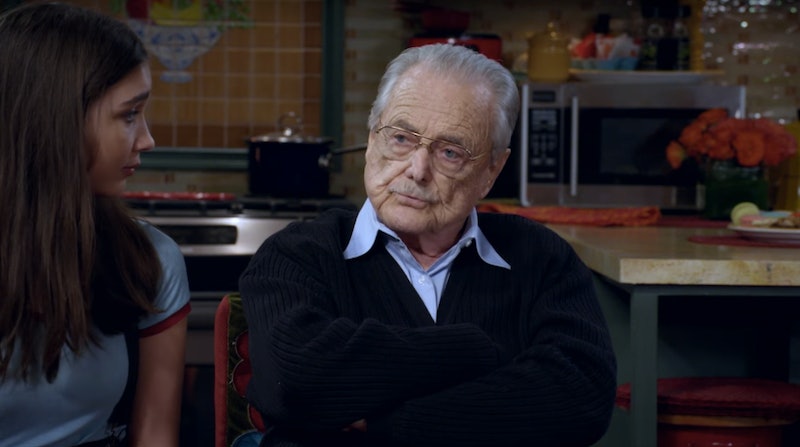 After the sad announcement that Girl Meets World is ending, a hopeful one has arrived to soothe the ache. According to Entertainment Weekly, Mr. Feeny will return to Girl Meets World for the series finale. The episode promo for the finale, which debuted on The Wrap, shows that Mr. Feeny will be appearing to bestow his wisdom and advice on the Matthews family one last time. It is a truly heartbreaking and poignant moment because it echoes the series finale of Boy Meets World; the callback will be especially emotional for fans.

It is definitely fitting that Mr. Feeny would come back to guide Girl Meets World to its tough ending. The trailer shows that the Matthews are dealing with a big decision — whether or not Topanga will take a job in London, effectively uprooting the family — while Riley and Maya try to find a way to keep their friendship intact if they do end up with an ocean between them. Who else could sanely guide everyone to the right decision apart from good ol' Feeny?

This isn't Feeny's first time on Girl Meets World either. Luckily, he was there for some big moments during the show's run, including officiating Shawn's marriage to Katy, Maya's mother. Feeny has been there for all of the big emotional moments in Cory and Topanga's life; do you think he wouldn't be there for their final days in New York City? C'mon now. It's almost expected that he would appear one final time on Girl Meets World, if only to ensure the show ends on the right note.

And Mr. Feeny knows a thing or two about endings. Back when Boy Meets World aired its series finale in 2000, the episode took place inside Feeny's classroom. That classroom was one of the most significant locations in the show, making Mr. Feeny one of the most significant people. In the series finale, he gave a final piece of advice to Cory, Topanga, Shawn, and Eric: "Believe in yourselves. Dream. Try. Do good," and then he uttered the show's poignant final lines, "I love you all. Class dismissed." Will he get a similarly emotional honor on Girl Meets World?

Goodbyes are never easy. Sending Girl Meets World on its way will be a gut-wrenching act for fans of the show, as well as the older generation of Boy Meets World fans who rejoined to watch Cory and Topanga as parents. But if there's one thing all fans knows, it's this: Mr. Feeny makes everything better.