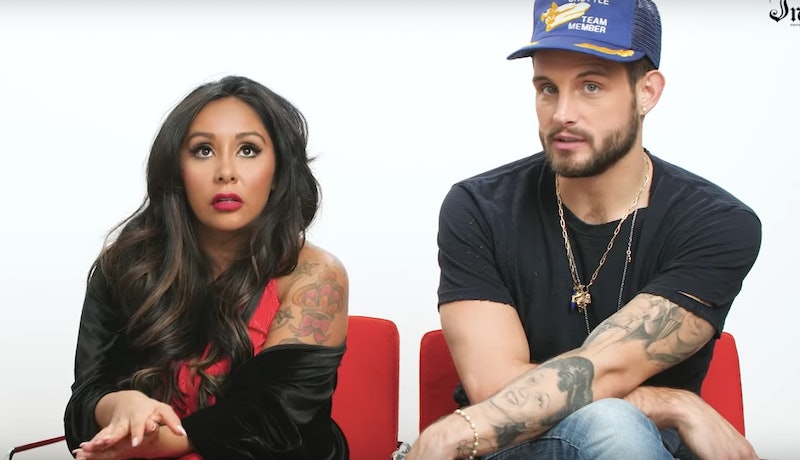 Remember those viral 2016 BuzzFeed videos that captured mother-daughter pairs in tattoo shops? How they carefully selected a tiny, cute tattoo for each other, taking part in what was a beautiful trust exercise with seemingly happy endings? Yea, MTV's new show How Far Is Tattoo Far is nothing like that, though the premise is similar. Spoiler alert: Things definitely get taken too far.

On How Far Is Tattoo Far, two people who know each other very well — friends, couples — have the freedom of designing and placing a tattoo for one another. And it seems like there's an unspoken rule that the tattoo must be terrible, at least judging from the premiere. The show turns what could be a doting trust exercise on its head by turning best friends, lovers, and family members against each other, which makes it hard to get on board with, no matter how much you love ridiculous reality TV.

The madness is all hosted by none other than Jersey Shore's Nicole "Snooki" Polizzi and Younger’s Nico Tortorella. And quite frankly, Polizzi's familiar and hilarious antics of grabbing a drink for the big reveals might be it's only saving grace. While she sips her pinot noir and watches through her fingers, contestants wear blackout shades on tattoo tables, waiting to discover their fates. Based on the first episode and teasers for the rest of the season, none of them seem promising. It's hard to stop watching though, try as you may to do just that.

Snooki's fellow Jersey Shore star Angelina Pivarnick and her fiancé Chris Larangeira lead the lineup, and their tattoo choices for one another nearly end their marriage before it begins. In order to understand the ink stains they gift one another, you definitely need some background info (which the show doesn't necessarily provide). According to Entertainment Tonight, Angelina has been engaged two other times, and, back in the day on Jersey Shore Season 2, Mike "The Situation" Sorrentino gave her the nickname of "Dirty Little Hamster," which she has since embraced, per Life & Style.

Oh, and she admittedly had a bout of drunken "period sh*ts" during her time on Jersey Shore: Family Vacation, which will go down in MTV reality history. Believe it or not, all of those tidbits speak volumes about the tattoos Angelina and Chris choose for each other.

A grueling countdown leads up to the big reveal, and it's not a happy one. A true representation of Angelina is tattooed on Chris' upper thigh: a period sh*tting cartoon hamster. For Angelina? Chris chooses a portrait of an engagement ring captioned with the phrase, "Third time's a charm," referring to himself, which she isn't really pleased about. Can you say...nope, I'm actually pretty speechless.

It only gets worse. A pair of self-proclaimed "party girl" besties try to teach each other a lesson with their tattoo choices. One of them, an aspiring adult entertainer, finds a chastity belt tattooed on her lower abdomen and breaks out into tears. But somehow, they end up hugging it out and insisting that they're "not mad" at one another. I'm sorry, what?

To be honest, it's difficult to find any silver lining among the chaos uprooted by this show — the only one being that, given their experiences, Tattoo Far contestants could be eligible for a role on another reality TV show. It's called Tattoo Nightmares. Let's hope that MTV at least hands people a brochure for some tattoo removal docs and foots the bill, because these works of "art" should only be temporary.