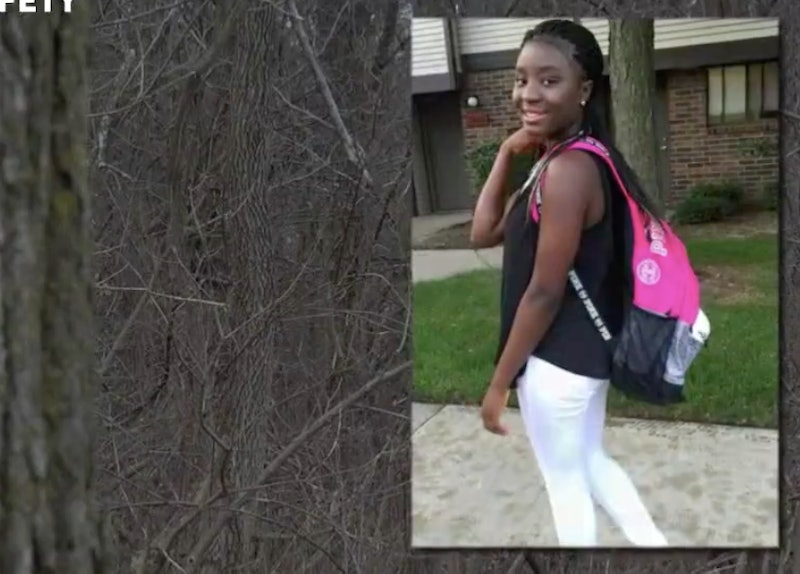 A Michigan teen who was preparing to testify against her alleged rapist has been found dead, and the authorities are reportedly describing her death as a homicide. Her name was Mujey Dumbuya, and she was killed in late January, just months before she was slated to testify against 42-year-old Quinn Anthony James, who is charged with multiple counts of criminal sexual assault and has not publicly commented on the charges against him.

James is reportedly being described by Kalamazoo law enforcement as a person of interest in the case of Dumbuya's death. Her body was reportedly discovered on Jan. 28 about 50 miles from her home. According to The New York Times, she was seen for the last time heading to school on the morning of Jan. 24, just days after an April 4 court date has been set for James' trial.

James was reportedly arrested in Wyoming, Michigan, on Feb. 1, though it wasn't related to Dumbuya's death. Rather, it was for a separate criminal charge he's currently facing, for an alleged sexual assault of a different teenage girl back in 2014. James was reportedly out on bail when Dumbuya disappeared; he's currently being held at the Kent County jail, according to the Times, with a bail amount set at $500,000.

Dumbuya was a student at East Kentwood High School in Kentwood, Michigan, a city just miles from Grand Rapids. Court documents obtained by local CBS affiliate WWMT reportedly allege that James, the uncle of Dumbuya's boyfriend and someone who once worked in her school district, sexually assaulted her several times from the age of 15 on.

Dumbuya, according to the documents, reportedly told investigators that James raped her in a car. James reportedly confessed to having sex with Dunbuya, but insisted it was consensual. The age of legal sexual consent in the state is 16, meaning there is no such thing as consensual sex between an adult man and a 15-year-old girl under Michigan law.

James was reportedly ordered to have no contact with Dumbuya while he was pending trial. Although law enforcement has described him as a person of interest, he has not been charged with anything relating to her death, nor have Kalamazoo authorities publicly announced any suspects thus far.

Her family, however, reportedly suspects foul play in her death, and according to CBS News, investigators with the Kalamazoo Department of Public Safety consider Dumbuya's death to be suspicious. It remains to be seen whether James will face any new charges.

A GoFundMe page was set up to help cover the cost of Dumbuya's funeral, which took place on Friday. The fundraiser has already brought in more money than its stated $10,000 goal, totaling $13,530 at the time of this writing. The info section for the fundraiser reads as follows.

Mujeh, a 16 years old Sierra Leonean was missing 1/24/18. Dressed up for school but never made it to school or return home. Sunday, 1/28/1, her body was found in the woods about 45-1 hour away from home. She loves to dance, sing, and do make-up. She was looking forward to her graduation next year. Mujey left behind 2 little handsome brothers, ages 13 and 4 months old. The family needs help in anyway you can help. Help us lay our princess to rest. May God bless you as you do so.

Another update described Dumbuya's friends and teacher lighting candles in her memory along the route she used to take to school.

"Mujey's friends, family, and teachers had a candle light for her, where she normal takes the bus to school," it reads. "May her gentle soul continue to rest in peace."