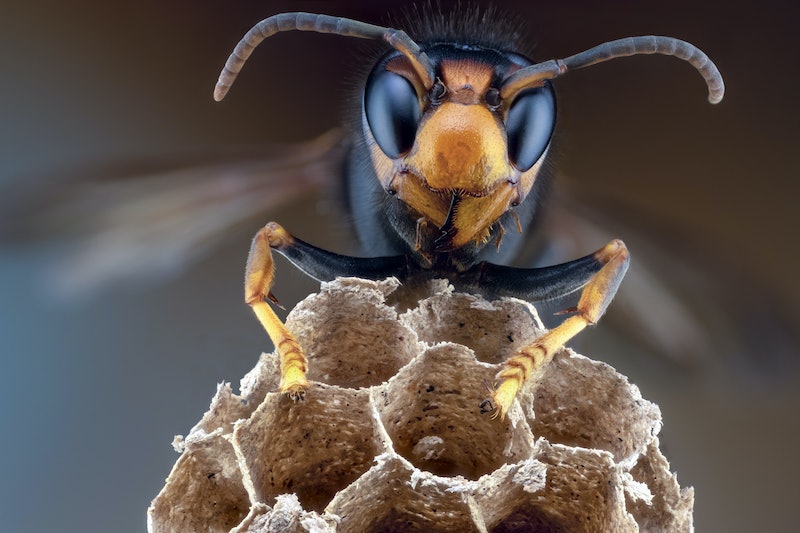 The world has been abuzz (yep, pun totally intended) about the arrival of the Asian giant hornet, otherwise known by the charming nickname "murder hornet," in North America. The New York Times reports that they've been found in Vancouver Island and Washington State, and there's a concern that scientists won't be able to stop these murder hornets from getting a foothold in the U.S. Murder hornets' main M.O. is destroying honeybee populations and stinging humans in the process — an injury that's supposed to feel like "red-hot thumbtacks," according to a victim quoted by the Times — so preventing that foothold would be good. The stings can even be fatal if you get swarmed by many hornets at once. But entomologists tell Bustle that while the Asian giant hornet's appearance in North America is concerning, it shouldn't be petrifying you right now. (Leave that to, you know, everything else that's happening.)

It's not surprising that you might be feeling concerned about the murder hornet — anxiety levels are pretty high at the moment, and that's not a very soothing nickname. "The Asian giant hornet, Vespa mandarinia, is a fierce predator that kills many kinds of insects, but it specializes on social bees that live in large colonies," Michael J. Raupp, professor emeritus of entomology at the University of Maryland, tells Bustle. And that includes the European honeybee, which lives in American hives producing honey and playing an important role in agriculture.

"These raiders decapitate worker bees to disable them, then carry the workers and bee brood back to the nest to feed the queen and wasp larvae," Raupp says. Asian honey bees have developed a defense against them, Michael Skvarla, assistant research professor of arthropod identification at Penn State's department of entomology, tells Bustle. "It's a really cool behavior where they dogpile the hornet and buzz their wing muscles to create heat," he says, effectively cooking the invading hornets to death. (Japanese scientists called it a "hot defensive bee ball" in PLos One in 2012, which is amazing and horrifying at the same time.) European honeybees, though, aren't so lucky; they don't have the same defenses, and are vulnerable to murder by hornet.

It's all very graphic, and it might be bad news for America's pollinator population — but it's not time to panic yet.

"The most compelling reason to be concerned about the hornet's possible spread is the ecological consequences," Quinn S. McFrederick, head of the McFrederick Lab at University of California at Riverside, tells Bustle. If the hornet spreads unchecked, it could cause a lot of damage both to honeybee populations and other native insect species, McFrederick says. But now beekeepers are on alert, and Raupp says that natural spread across the U.S. will likely take many years. Hornets don't just take over a country overnight, and a lot of people are mobilizing to stop them.

If you're worried about getting stung on your daily walk, concentrate on wearing a mask instead. The stings are indeed painful — Raupp says they include both a cytolytic toxin that destroys cells and a neurotoxin — but likely aren't going to kill you unless you happen to be allergic, or are stung by many at the same time. "Asian giant hornets are aggressive when they feel their nest is threatened, but aren't more aggressive than other social wasps," Skvarla says. He also points out that they're only found in very small pockets of the continent right now.

If you do live in one of the two affected areas, Ngoc Phan, a Ph.D. candidate from Penn State's department of entomology, tells Bustle that murder hornets live underground in forested areas and tend not to target humans. They could ruin your summer in one special way, though. "They can rob meat from an outdoor BBQ party," she says. "In that case, just walk away — do not run, leave them alone, and do not try to disturb them." It's very easy to confuse the Asian giant hornet with the European hornet, too, so if you see a giant hornet hovering around, it's most likely it's one of the latter and isn't a problem.

Even if they do spread across the U.S., they'll mostly affect beekeepers, not everyday people, Skvarla says. So you can put that on the do-not-worry list for now, and go back to being concerned about every other thing on the news.

Quinn S. McFrederick, head of the McFrederick Lab, University of California at Riverside

More like this
6 Organizations Fighting Police Brutality That You Can Support Right Now
By Syeda Khaula Saad and JR Thorpe
Picky Eater? Sensitive Stomach? This Vet Nutritionist-Designed Dog Food Has A Plan For That
By Maria Cassano
Everything You Need To Know About The Samsung Galaxy S23 Ultra’s New Camera
By Alexis Morillo
Samsung's New Phones Have Amazing Cameras & Come In 8 New Colors
By Alexis Morillo
Get Even More From Bustle — Sign Up For The Newsletter
From hair trends to relationship advice, our daily newsletter has everything you need to sound like a person who’s on TikTok, even if you aren’t.