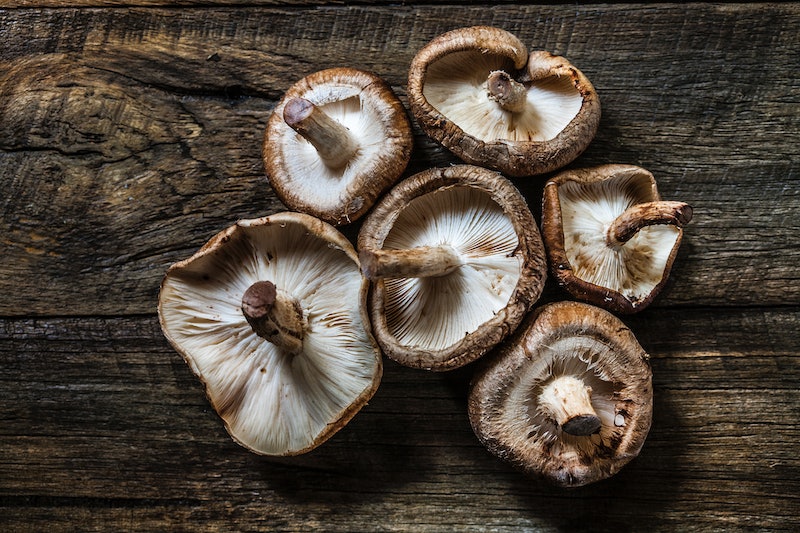 Mushrooms: they're a bit like Marmite. You either love them, or you hate them. With their grey-ish appearance and sometimes slimy texture, hating them is understandable, and yet, they can taste so delicious, and they have a surprising amount of health benefits. However, not only are they brilliant to eat in your favourite dish, they're also making a name for themselves within the beauty world. Complexion products with mushroom extracts are particularly taking off, but does mushroom skincare actually work?

While mushrooms have been used for many year in certain areas of the world (in traditional Chinese medicine, for one), the West's new-found obsession with them really began when plant-derived skincare started to become popular. In fact, the global mushroom market is expected to increase from $35.08 billion (£28.9 billion) in 2015 to $59.48 billion (£45.5 billion) in 2021, according to Stylist. As a natural ingredient, mushrooms have become increasingly attractive, and they certainly do have a number of benefits that make them even more appealing.

For one, they're excellent at helping protect the skin from pollution, and other environmental aggressors. "Most mushrooms have high antioxidants and contain metabolites that can help fight free radicals,” Tiina Isohanni, vice president of research and development at Lumene told Stylist.

“Others reduce melanin content and inhibit tyrosinase activity (melanin production), which helps brighten skin and fade dark spots, and many have anti-inflammatory properties," she continued. "They’re also high in vitamin D, which is essential in supporting the skin’s immune system.”

So in short, they also help to brighten dull skin and aid pigmentation, as well as soothe stressed-out skin. Impressive, huh?

There are numerous types of mushrooms that can be used in skincare. Cordyceps, for example, are popular, while chaga and sheep polypore are also used. You may have also heard of shiitake and reishi being used, both of which encourage cell renewal and increase skin elasticity.

And then there's snow mushroom, which looks set to be the biggest trend in this area for 2020. Snow mushroom (or tremella fuciformis as it is formally known) can hold up to 500 times its weight in water. While this is half the amount hyaluronic acid can hold, the particles in Snow Mushroom are smaller, meaning they can penetrate, and thus hydrate, more effectively.

While this all sounds wonderful, it's important to keep in mind that mushroom's use in skincare is still relatively under researched. "There are very few robust clinical trials showing the benefits of chaga, resihi and cordyceps in skincare," Consultant Dermatologist Dr Anjali Mahto told Women's Health. "They may well prove to be of benefit," she does still add, "but it is still a bit too early to tell."

However, if you are interested in trying out this ingredient for yourself, check out the products below.

Inspired by Japanese cuisine, this mushroom-powered gel moisturiser is perfect for oily skin thanks to its lightweight yet nourishing nature.

One of the longest-standing mushroom-derived ranges, Dr Weil's for Origins features some great options, most notably this no-rinse micellar cleanser.

Another formula that is ideal for oily or acne-prone skin, this lightly moisturises, and comes with a handy pump.

An affordable way to get in on the trend, this is the ultimate plumping, hydrating moisturiser under £10.

With a powerful blend of ingredients (including mushroom), this serum helps to refine pores, smooth, and rejuvenate.