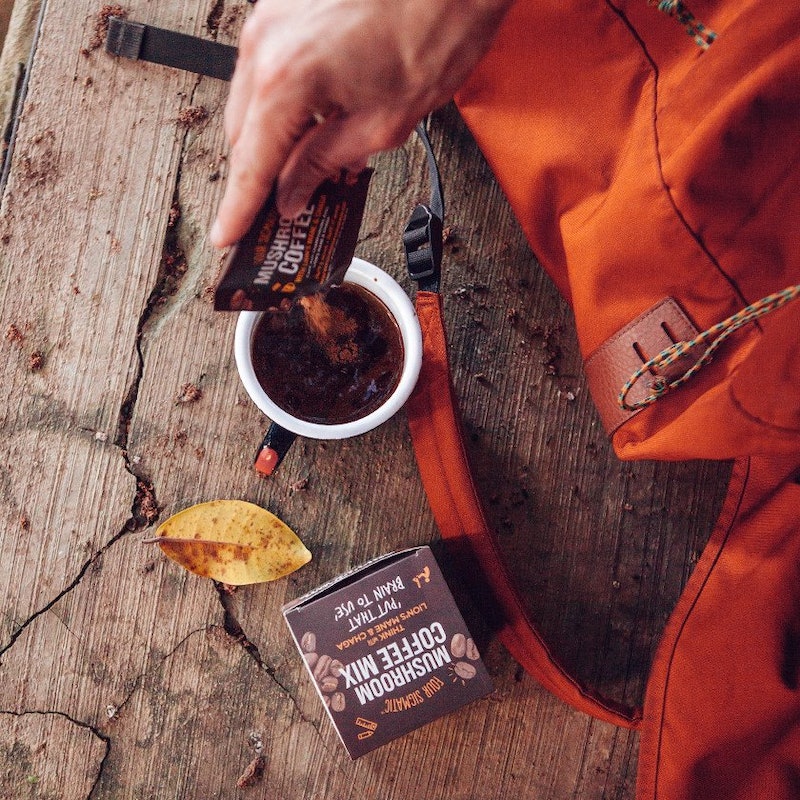 This is not a drill: The newest food fad has people drinking coffee made out of mushrooms. And no, this is not an early April Fool's Day prank. Courtesy of a company called Four Sigmatic, Mushroom Coffee claims to give you the benefits of caffeine without the downsides. Bustle has reached out to Four Sigmatic for comment, but received no response by press time — but for the curious, here's what we know so far.

As most of us die-hard coffee drinkers know, drinking coffee has its benefits... except for when you drink too much. Consuming too much caffeine can lead to side effects that range from simply uncomfortable (such as an upset stomach) to actually dangerous (think chronic insomnia). That's where Mushroom Coffee comes in: It's here to offer a less caffeinated alternative that provides plenty of nutrients to boot.

According to Tami Abedowale at Delish, each cup of Mushroom Coffee contains about 40 mg of caffeine, which is roughly half the amount in a standard cup of coffee. While I haven't tried Mushroom Coffee myself, I believe the idea here is to enjoy the benefits of caffeine, such as better focus and mental clarity, without the side effects of withdrawals and crashes by the time the middle of the day rolls around. There is nothing worse than the dull headache and irritability that signal to you that caffeine has left your body and you need more.

So, what does this stuff taste like? As someone who is not a fan of mushrooms, I'm reassured to hear that the mushroom taste is pretty nonexistent. Apparently you don't taste mushrooms at all; instead, the flavor of the coffee supposedly feels "rich" and "mellow." Rachel Wilkerson Miller over at BuzzFeed describes it as tasting "like a tea-coffee hybrid," which has me sold for when I'm craving caffeine, but don't want quite the full hit of an espresso.

How is this magical brew made? According to Food Republic, this unique drink is made by liquefying and drying mushrooms, taking the mushroom extract, and combining it with regular coffee. Luckily, though, it also looks really easy to make at home. In fact, you don't even need your own coffee maker to do it! Similar to instant coffee, you literally just add water to the contents of the coffee packets. Simple, right?

To learn more about this begverage's production and history, check out Four Sigmatic's video below:

You can buy Mushroom Coffee directly from Four Sigmatic's website for about $15 a pop. Bottoms up!