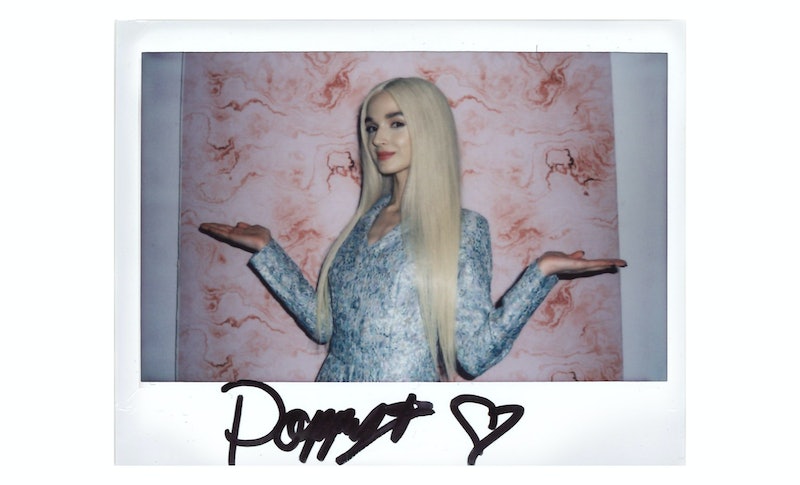 When celebrities hang out with Bustle editors, we want to give them the chance to leave their mark. Literally. So we hand them a pen, a piece of paper, a few questions, and ask them to get creative. The rest is up to them. This time, musician and YouTuber Poppy is leaving her mark in the Bustle Booth.

I really didn't know what to expect when I heard that Poppy was coming to Bustle's HQ to talk about her sophomore album, Am I Girl, which was released on Oct. 31. In past interviews over the years, Poppy, a musician, YouTube star, and aspiring cult leader (more on that later) had sometimes remained completely silent, allowing her collaborator, producer, and friend, Titanic Sinclair do the talking about the videos and music they make together. She's been described her as "cryptic," "disturbing," and won the "Best In Weird" award at the 2017 Shorty's.

When I ask Poppy about these descriptions, she considers them for a minute, mindfully scooping a veggie chip into some hummus from our office kitchen before she answers. "I think the way Titanic Sinclair and I see the world, we ask a lot of questions to the audience and let them fill in the blanks. I don’t know if you would consider that weird," Poppy says in her trademark sing song voice.

"I think that’s our job as creators and artists, it’s to pose questions and get people to ask more questions as opposed to going along with the person on the TV or the stage or the pedestal," she adds. Sinclair, who up until now has been scrolling through his phone, jumps in to add, "That's what makes them uncomfortable." Poppy nods in agreement.

Although she has always made music a focus, Poppy initially became an internet sensation thanks to her short YouTube videos, directed by Sinclair, the first of which was posted back in 2014. She tells me that the videos all "tell a story" when you string them together, though of late have taken an increasingly darker tone. A recent one from this summer has her considering the public's obsession with celebrity engagements. In another, 23-year-old Poppy hunts a raccoon (or the raccoon hunts her?) in a basement straight out of AHS: Murder House.

Stylistically, these, and other recent videos, are a shift from the earliest ones she became famous for, in which she repeats her name for minutes on end in a robotic cadence, silently eats cotton candy, or interviews her plant. ("When was the last time you felt really alive," she asks it.) They are seemingly more innocent, but just as unnerving if you find yourself watching dozens of them on a loop, which is hard not to do once you hit play.

"The style [of the earlier videos] was very pop art and the music was also very pop and now we're moving more into this heavy, sonically speaking, space," she says. She takes a minute to consider what she's just said before concluding that, after three years, "it’s time to reinvent."

To make her point, Poppy cites one of her favorite songs from her new album, "X," a very nu-metal track. "In the video, I got to be covered in blood. It was actually a dream of mine," she tells me with a smile. On the album, she sings about celeb culture, gender identity ("Sometimes I feel like a boy, sometimes a girl, and sometimes I feel like nothing at all," she tells me with a shrug), running the world, and saving it.

Salvation is a theme that runs through all of her work these days. Poppy calls her fans "church members" or "cult members" interchangeably and proudly tells me that she was "able to save a bunch" of them during the European leg of her tour this year, after they confessed their sins to her before the show. I tell her that I've applied to the church just that morning, which I had just gathered was an online forum for fans and a way to sell merch, some of which has "I Am Not In A Cult" screen-printed on it.

She beams at me, ensuring me that I'm likely to be accepted soon. "The Church of Poppy is a place where my cult can gather to worship Poppy. And I also hope that they become friends and become acquainted with one another," Poppy tells me. "It’s very fun and very communal and I hope to bring the Church into physical form and into real life, but first we are starting out on the internet." I try to ask her what she means by confessions and physical forms, but she's already looking for a pen.

As she starts to fill out the Bustle Booth, Poppy explains to me why she doesn't like coffee, and I realize that she isn't weird, cryptic, or disturbing at all. In fact, she might really be onto something when it comes to how we think about internet culture and celebrity. And talking to our plants, of course. Check out her Booth answers below.

More like this
In 'The White Lotus,' Leo Woodall Gets His Moment
By Gabrielle Bondi
'Wakanda Forever' Is Already Opening Doors For Mabel Cadena
By Grace Wehniainen
Taylor Swift Fans Sue Ticketmaster For The Eras Tour “Ticket Sale Disaster”
By Jake Viswanath
Dolly Parton Joins TikTok & Debuts A Song About Baking
By Jake Viswanath
Get Even More From Bustle — Sign Up For The Newsletter