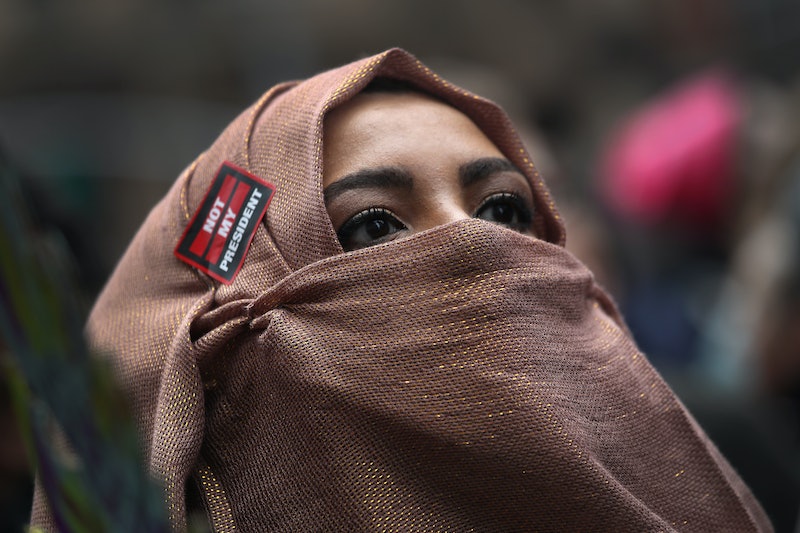 Thanks to the First Amendment of the Constitution, Americans of all religious faiths enjoy equal rights and protections under the law — at least, in theory. However, an alarming number of U.S. citizens don't seem to believe that this is the case: A new poll finds that nearly a fifth of Americans don't think U.S. Muslims have the same rights as non-Muslim Americans. In addition, 15 percent of Americans don't think that atheists have the same Constitutional protections as do religious Americans.

As a quick refresher, here's the text of the First Amendment:

Congress shall make no law respecting an establishment of religion, or prohibiting the free exercise thereof; or abridging the freedom of speech, or of the press; or the right of the people peaceably to assemble, and to petition the Government for a redress of grievances.

It's pretty clear-cut. Congress isn't allowed to pass laws that either grant preferential treatment to or discriminate against people of specific religious faiths.

A disturbing number of Americans, however, think otherwise. A poll by the University of Pennsylvania's Annenberg Public Policy Center found that about 18 percent of Americans think it's "very or somewhat inaccurate" to say that Muslim Americans have the same rights as other U.S. citizens, while an additional 4 percent said they don't know whether equal rights for Muslims are protected under U.S. law.

Questions about the rights of atheists elicited a similar response: about 15 percent of respondents called it "very or somewhat inaccurate" to claim that American atheists have the same Constitutional rights as all Americans, with 5 percent saying they didn't know whether or not this was the case.

Sadly, it's not entirely surprising that such a big chunk of Americans don't think Muslim citizens have First Amendment rights. For one, a whopping 37 percent of respondents in the same survey didn't actually know any rights that the First Amendment confers. So, there's that.

Beyond this, a good portion of the American right has, in subtle and non-subtle ways, spent years portraying Islam not as a religion to be respected like any other, but as a political threat to the well-being of the United States. This attitude can be seen, for instance, in the frequent demands by Donald Trump and other conservatives that politicians use the phrase "radical Islamic terrorism" to describe ISIS-inspired terrorist attacks. (Curiously, Trump has never demanded that folks use "white supremacist terrorism," even though the latter is more common than the former.)

It can also be seen when a lawmaker warns against "Sharia law" in the United States: Since 2010, 120 pieces of "anti-Sharia" legislation have been introduced by U.S lawmakers, according to the Southern Poverty Law Center. This is a classic example of a panicked overreaction to a non-existent problem, as there is no threat whatsoever of Sharia overtaking U.S. law.

Although it's easy to make fun of folks who lack a basic understanding of their own government's Constitution, these misperceptions have consequences. Anti-Muslim hate crimes have risen dramatically over the past several years; it's impossible to blame this on any one factor, but it's equally impossible to ignore the growth in anti-Muslim rhetoric amongst U.S. politicians, primarily in the Republican Party.

Unfortunately, the same University of Pennsylvania poll also found many other shortcomings in Americans' knowledge of their government. The majority of respondents — 53 percent — incorrectly believed that undocumented immigrants don't have any Constitutional rights at all. But that's not the case: The Supreme Court ruled in 1886 that undocumented immigrants are protected under the 14th Amendment's equal protection clause. Even more frighteningly, only 26 percent of those surveyed could name all three branches of the U.S. government.