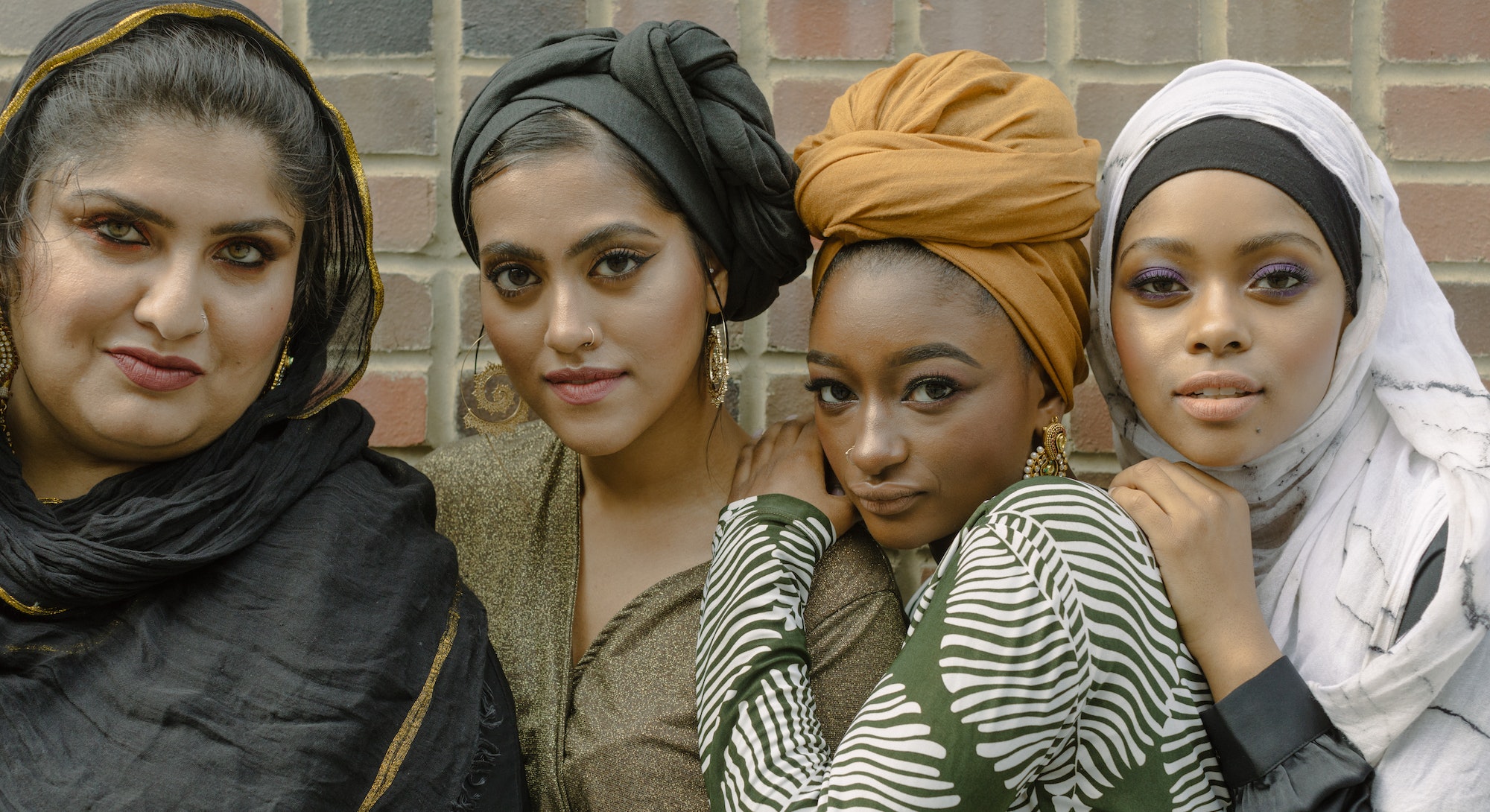 This story is an editorial collaboration between Bustle and Muslim Girl.

Marwa Atik never meant to get into fashion.

Her walls were lined with old Vogue magazines, ones she had been collecting since 8th grade. Even at that young age, she already knew she loved industry, but doubted it had any room left over for someone like her.

“In college, I literally picked every single major that had nothing to do with fashion because it didn’t seem tangible to me,” she remembers. “In 2008 when the only insight you had to fashion was Lauren Conrad in The Hills, it seemed almost impossible to get into [the industry], considering a hot-shot OC girl like her struggled”.

Fast forward a few years later, when Atik started putting ruffles and zippers on scarves and tried selling them on Facebook. They all sold out. In 2010, Atik and her sister Tasneem decided to take the plunge to start their own business, and officially launched the Vela website.

Today, Atik is the co-founder of Vela, a major L.A.-based online accessories store that caters to modest Muslim women. On her website, she sells hijabs and apparel for a growing market: Muslim women who want to look on-trend while maintaining their modesty.

“The industry changed. Fashion in my time was intimidating and hard to get into. Now with social media and the idea of blogging and expressing yourself for the world to see, it's much more feasible,” Atik says.

There isn’t really much difference in what Muslim women seek in their clothes from non-Muslim women —if anything, the desire usually is just for something a little longer and looser. Every hijabi knows the feeling of finding the perfect maxi skirt, and then seeing that it has a slit in it. Or, like this past summer, when every nice shirt just happened to be an off-the-shoulder.

Atik is one of the many small business owners who have been catering to the growing modest fashion industry since before mainstream brands did so. Her store Vela was created to fill the void Atik saw when it came to chic, modest clothing.

According to the "State of the Global Islamic Economy Report,” produced by Reuters and DinarStandard, Muslim consumers spent $243 billion on clothing in 2015. Muslim women made up 18 percent of that figure, spending $44 billion. The number is expected to double by 2021. It’s no surprise: A modest customer is a dedicated one — once Muslim women decide to wear modest clothing, such as choosing to wear the hijab, they frequently stay modest for the rest of their lives, directly affecting their shopping habits.

So, it’s understandable that many major brands have now tapped into this market. Marks & Spencer, a massive UK retailer, sells burkinis. DKNY, Mango, and Burberry have all released lines aimed at Muslim women. Dolce & Gabbana, a major Italian couture house, put a luxe spin on abayas — long loose dresses worn by Muslim women — and offered them to wealthy shoppers in the Middle East, Paris, and London.

Companies are also directing more of their efforts to attract millennials, a group Forbes and Elite Daily recently reported to be quite loyal to brands they love. Companies want to establish themselves as inclusive, because they know that’s what millennials value, as a study from Deloitte and the Billie Jean King Leadership Initiative titled The Radical Transformation of Diversity and Inclusion: The Millennial Influenceshowed.

Bigger fashion brands launch lines or products catered to Muslim women, which then receive lots of good press and praise. For example Nike’s Pro Hijab, which was recently named one of TIME’s top 25 inventions, even though sports hijabs are nothing new. The TIME list says, "Unlike a traditional hijab, the Pro is made with light, breathable fabric that wicks moisture," which arguably implies that this hijab is made with new technology. However, the brand Capsters has been selling them since 2001; Ahida has been doing the same since 2004. Other Muslim-owned companies like Asiya and Sukoon Active also released sports hijabs before Nike.

Atik also finds it hard to determine how sincere bigger brands are being when they “diversify” their campaigns or product offerings.

“I believe the fact they are even giving us opportunity in ads and expressing modest fashion in their lines is a step in the right direction,” says Atik. “But it still bugs me how when they have a hijabi girl in a campaign group, she’s just that extra to say ‘hey look we included a minority.’”

Of course, small business owners who have been creating modest apparel and accessories just don't get the same attention as huge corporations that are part of the mainstream fashion industry. While moves to include Muslim women in product offerings are greatly appreciated, the often-smaller companies that have catered to Muslim women since before it was trendy deserve part of the credit too.

Lisa Vogl is the owner of Verona Collection, a boutique that also sells modest clothing for Muslim women. Initially starting out as a fashion photographer, she noticed a need for trendy inexpensive Islamic clothing when she converted to Islam in 2011. In 2015 she launched Verona. A year later, her company opened a brick-and-mortar location in Florida, becoming one of the first stores of its kind to be in an American mall.

“A company such as Verona run by Muslims, we live and breathe the social mission to empower our community and women in general,” she says. “Verona believes that women are empowered not based on whether they cover or reveal, but because they have the option. And we’re here to give women that option.”

Ibtihaj Muhammad is another small business owner. She owns Louella, which came out of her need for outfits for the events she attends for her other job: U.S. Olympian.

“As a public figure and sports ambassador, I found myself doing a lot of speaking engagements domestic and abroad, often in front of large audiences. I wanted to modest in my dress, but also express myself through what I wore,” she says.

Muhammad made history and headlines in 2016 as the first woman to compete in a headscarf for the U.S. Olympic team. Tired of having her choices limited to the more expensive, oversea options in modest clothing, her brother suggested making a cheaper alternative. Today, she owns Louella, which creates modest clothing in Los Angeles, and uses the services of solely female owned and operated manufacturers.

“I was tired of layering and mostly tired of modest fashion not having a proper seat at the table,” says Muhammad. “The lack of representation was clear and I felt it time fill the void for millennials out there who wanted to be fashionable without jeopardizing their desire to be modest.”

Muhammad finds inspiration for her clothing from fashion shows and her travels around the world. She puts in a lot of effort to offer a range of modest options, plus her brand is made entirely in the U.S. And here's a bonus: Everything in the line is under $200.

Brands like Verona, Louella and Vela design their clothes with experiences of hijabi Muslim women in mind. Their market research starts within the designers’ own closets and shopping habits. They will always have a more in-depth knowledge of their customer base then bigger fashion brands will.

These women were here when no one else was. With their dreams of global expansion and brick-and-mortar stores, we know they’ll always stay major players in the modest fashion game.