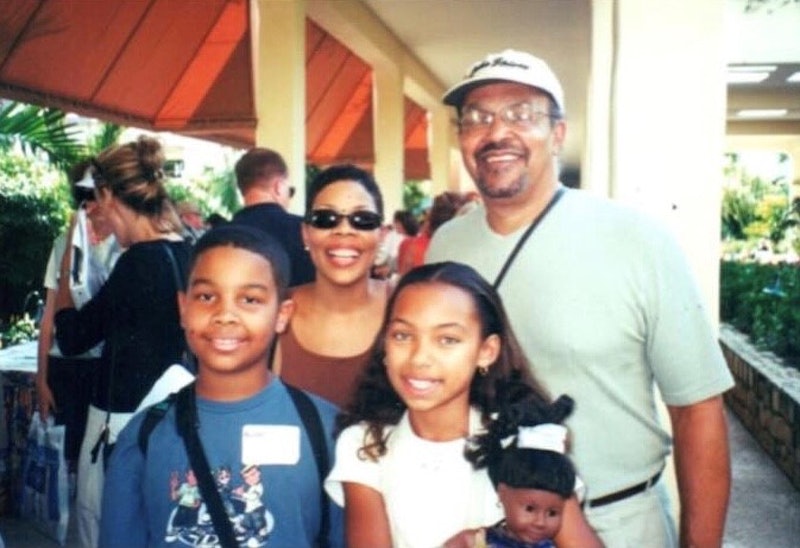 In this personal essay for Bustle's All American: Growing Up series, Logan Browning, star of Dear White People and The Perfection, shares the impact her American Girl doll had on her at a young age.

Most people meet their best friends in school. I had a few, but American Girl introduced me to one of my absolute closest, Addy Walker. Addy was an 18-inch, 9-year-old doll I met in their direct-mail catalog. I’ve always loved dolls, but I didn’t consider her one. She was my daughter-sister-friend, and she went everywhere with me. “Can Addy come?” was my most used phrase in the late 90’s/early aughts. She went with me on vacations, to restaurants, and was accepted as a part of the family.

I’m pretty sure I was the only kid at my two week sleepaway camp with a doll. Sleepaway camp is when you’re supposed to be a “big girl”, but my unwavering version of being a “big girl” was still never leaving my closest gal pal behind. My parents and I got to camp early on load-in day, and I picked the bed by the window with the natural light and beautiful view. The window ledge made a perfect landing for Addy’s bed and luggage. When I woke up and made my bed in the mornings, I made hers, too. I would change her from pajamas to day clothes, and sit her up with a waving hand to greet me when I came galloping in from the day’s activities. I loved her.

Every Christmas I would ask for something new from Addy’s collection: usually one of her outfits or a piece of furniture. All of the American Girls had books paired with them to tell you about their unique historical time period, and while I was privileged enough to ask for more accessories for my doll, my beloved Addy’s story began with slavery. I learned this doll I was drawn to, because of her beautiful brown skin and soft sweet smile, spent her formative years on the road to freedom. A journey and time I knew about from a peripheral perspective as a girl from the South, but one that took on a new and personal relationship for me because my daughter-sister-friend, who seemed to exist in the same four walls as I did, actually fought through a time unimaginable. My empathy for my doll deepened. I understood her to be a resilient, smart, and brave girl who loved her family deeply. I hoped to be like her. I saw myself in her. I imagined being in her circumstances experiencing slavery and the civil war as a child... because had I been of an earlier time, I would have. At that age, I had acquired a limited history on the transatlantic human slave trade in elementary school, but Addy’s story immersed me into who I might have been as a 9-year-old in 1864.

I guess it was time for me to grow up, though I could easily have Addy waving on my shelf right now, and be as grown up as ever.

As an adult, I look back and wonder if Addy’s story was problematic, and the thing is: it was, but it’s our history. It’s my troubling history as an African-American, and it’s America’s dark history. Even so, it’s pretty heavy material for a girl at playtime, and I wonder why not begin Addy’s story at a different time? I know the other American Girl stories included themes of strife, sadness, and suffrage, but none of them seemed to touch slavery, even though their history overlapped the same time period. Slavery began in 1619, and with all the dolls having stories that emerge in subsequent years, it’s a double-standard that not one white doll’s story experiences it to the extent Addy’s does. It’s as if somehow Addy existed in a vacuum, which seems to be America’s naïveté towards its own history today. I’m sure the Pleasant Company intended for every doll to tell a different story, but if slavery is a part of Addy’s, is it not also a part of Felicity’s, Kirsten’s, Samantha’s, and Molly’s? Why is only the African-American doll, and subsequently the girl who chooses her, immersed into this part of American history?

I have a niece. She’s off to college now, but there was a time when she was my mini me. My life-sized doll. I loved and played with her, and noticed that while my attention shifted from Addy to this actual human, she grew to love the doll. I gave Addy to her. I guess it was time for me to grow up, though I could easily have Addy waving on my shelf right now, and be as grown up as ever. I wanted to share the magic she brought into my life, and give my niece an opportunity to love and be inspired by her. Although, I don’t remember giving her the book that came with Addy. I was young then too, but maybe I knew I just wanted her to have this beautiful brown-skinned doll whom she could imagine any kind of past and future life for. She would grow up to learn the same history I did: our history as African-Americans and therefore Americans, but maybe giving her the choice to imagine any life for Addy, and thus herself, was what I ultimately wanted for her.