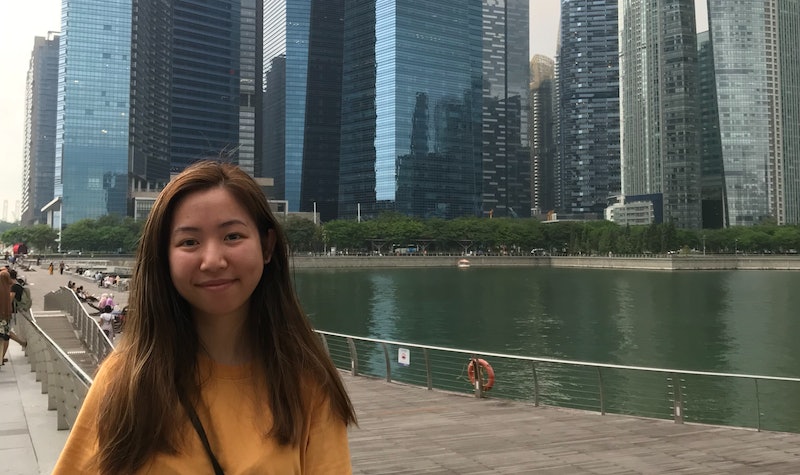 I remember sitting across from the psychiatrist in a dim and barely furnished office. She asked about my day, and then delved into why I was seeking counseling. As a meek and unobtrusive 19-year-old college freshman, I had worked up the courage to see a counselor about my low mood and chronic fatigue, despite conservative Chinese parents who didn’t believe in therapy. I worried my problems sounded silly. I told her I wasn’t happy, and I had trouble falling asleep and waking up on time. I felt like a stereotype sharing that I was stressed about school, or that I spent the day curled in bed if I received grades below an A. “I’ve felt this way since I was 15,” I confessed.

As a college student, I spent most days in bed, leaving only to attend class or eat in the dining commons. There wasn’t much I enjoyed doing. Visiting the beach by myself, I didn’t appreciate the rolling waves or beautiful California sun. I only focused on the tarry sand, full of trash and God knows what else. One weekend, a friend suggested going to the waterfront, grabbing lunch, or exploring school grounds. I shot down every suggestion, explaining it sounded boring. Disappointed, she asked, “Why do you hate everything?” I didn’t see myself as a negative person, just a realistic one. I thought I was mature for accepting that life wasn’t great.

When I did go to campus events, I’d come home feeling like I’d wasted my time. I watched people bonding over ice breakers while I strained not to run to my dorm. I’d crawl into the top bunk late at night with makeup intact, feeling lonelier for having tried to socialize.

My therapist suggested long walks outside whenever I felt irritated. “Give yourself space to be mindful,” she advised. After dinner, I hiked through trails around campus. It made me calmer, but didn’t relieve my sadness. With her encouragement, I attended student organizations to make friends. I left with with free snacks and T-shirts, but not much companionship.

I kept going back to the shrink, hoping something could help. After following her advice for weeks, I still felt the same. It was then that she suggested I might have dysthymia, a low-grade, longer lasting form of depression. Dysthymia, or persistent depressive disorder (PDD), is diagnosed when someone has had chronic feelings of sadness for at least two years, licensed psychologist Jessica L. Dubron tells me, and those symptoms don't meet the criteria for major depression. (“Think Eeyore from Winnie the Pooh,” she tells Bustle.)

At first, I was hesitant to accept a diagnosis, wary of being labeled or judged. As a small, soft-spoken Asian American, I already struggled to belong among the pretty, athletic co-eds around my California school. “I just have a hard time making friends," I told my psychiatrist. "I’m not fun.”

“Dysthymia patients are most likely to describe themselves as too boring,” she said. “Many people don’t get treatment because they think the symptoms are just part of their personality.”

I was floored. Everything about the condition felt spot-on.

According to the National Institute of Mental Health, less than 2% of U.S. adults were diagnosed with PDD in 2018. According to Dr. Dubron, “Persistent depressive disorder can be harder to diagnose than major depression. …In fact, people with [the disorder] may not recognize anything is wrong as they have felt this way for a long time.” Symptoms can include low self-esteem, feeling hopeless, changes in appetite, fatigue or trouble sleeping, or trouble concentrating, Dubron says.

If something could help, I owed it to myself to try.

When my therapist suggested prescribing me antidepressants, my first instinct was to refuse. In my family’s East Asian culture, there were deep stigmas against mental illness. Hardships were overcome with hard work and resilience, not medication. I could already hear my mother insisting depression was an excuse for being lazy. But then, I realized I was already getting professional support without my family’s permission. My parents didn’t know I was seeing a psychiatrist. I’d used my student health insurance to cover the sessions. It was their prejudice against counseling, not mine. If something could help, I owed it to myself to try.

I met with a physician the following week who prescribed me an antidepressant called Wellbutrin. I hurried home from the pharmacy with my medication. The next morning, I started taking one every day like the doctor suggested, skeptical it would help. Within a couple weeks, my fatigue lessened. I had more focus in class. The crying stopped.

As a teen, I’d assumed I was just dull and moody. I thought happiness belonged to people with more energy or self-esteem. It didn’t occur to me that permanent apathy wasn't part of who I am. According to Dr. Dubron, medication and talk therapy are helpful for many patients. She explains the risk factors for PDD can include experiencing early parental separation or loss, or having a close family member with PDD.

It’s been six years since I first walked into my school’s mental health center. I still haven’t told my parents about my psychiatry sessions, but absent of their support, I knew I needed to look for guidance on my own. At 25, I still struggle every day to feel “normal,” but with the help of therapy, I’ve avoided the low spirits I felt at 19. It took putting aside inherited biases to realize I needed help. If I hadn’t, I might still be feeling gloomy, blaming myself for not being more interesting — when in fact, it was just dysthymia telling me I wasn’t.