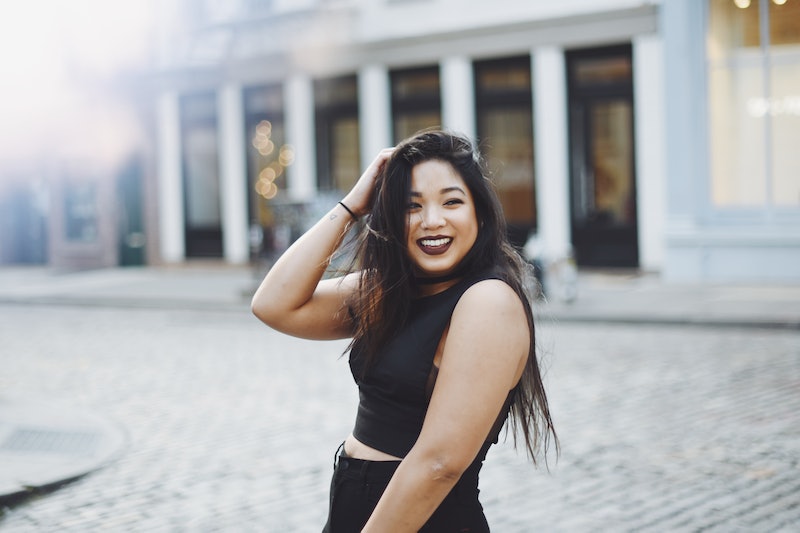 From preschool to third grade, back-to-school shopping included buying new gel pens, and spiral notebooks. It also included khaki skorts and white and navy polos, my version of a uniform. I'd always assumed that wearing a uniform was a part of going to school. Up until fourth grade, I attended a magnet school that required them. When I transferred to my neighborhood school halfway through the year, uniforms were no longer a necessity. I remember being thrilled at the idea of being able to pick what I wanted to wear. There was only one problem: My parents are Filipino.

Both of them grew up in the Philippines, where most people wear uniforms for their entire education. The way they explained it to me, going to school in their home country was extremely regimented: Everything from their haircuts, to their fingernails, and — of course — their uniforms were policed by their teachers. The lengths of girls' skirts were physically measured with a ruler, boys' hair could not touch their collars, and they had to hold up their hands for inspection to ensure there was no dirt underneath their fingernails. They even received marks in what was called "Good Manners and Right Conduct" (GMRC for short) based on their outward presentation and the way they interacted with authority figures; poor grades in GMRC could result in failing the entire grade.

As a result, they were adamant about the fact that I should wear uniforms, too.

"We wore uniforms through college," they told me. "They'll make your life easier."

When it came time to shop for school, they simply informed me that I'd be wearing my khaki skort and polo. My parents felt that taking the complication out of my wardrobe would help me focus on my studies, and that I would look forward to wearing my nicer clothes for "porma," as we say in Tagalog, on weekends. Though I protested, I had to swallow my uncertainty and start at a new school as a transfer student, clad in an unnecessary uniform.

My Hermione-esque, geeky, know-it-all nature, paired with my distaste for sports and affinity for the arts, topped by the fact that I showed up at school every day in "nerd attire," made me an easy target for bullying. I had left my previous elementary school because I was bullied, and that was at a school where everyone was required to wear the same thing.

The only thing that had changed was that, at this new school, no one else was dressed like me. I figured that must be the reason I was being picked on so badly. I begged my parents to stop requiring me to wear uniforms, but they refused to entertain the idea.

Finally, the time came when I could consider myself a middle schooler. I was ready for a new environment, surrounded by people who didn’t know me; I could start over as just a normal girl like everyone else. Little did I know that I'd be in for a rude awakening: My parents insisted the uniforms would live on unless I got straight As through the first semester.

I remember crying and pleading with them to change their minds so I wouldn't have to (yet again) be the weird nerdy girl who had a parent-mandated uniform, but to no avail. The uniform stuck. I did have a new liberty, though: I could expand my selection of bottoms into black pants, if I so chose (I did so choose).

The first semester of sixth grade seemed to crawl by. Every day, I got ready for school by putting on a pair of black stretchy pants (think gauchos but less fun), a white polo, and a black sweatshirt from Aeropostale that, in my opinion, was the only redeeming quality of my outfit (plus it had the little butterfly logo embroidered on it, so that meant I was cool, right?). And even though I lived in Florida and the first semester fell during the most humid part of the year, I religiously wore the sweatshirt and pants — anything to avoid reverting back to khaki skorts, or for my classmates to see the polo underneath the hoodie. I proudly brought home every A+ test and homework assignment with a huge grin, because it meant that I was one step closer to wardrobe freedom.

I'll never forget bringing home my second quarter report card that had seven shiny As on it. I didn't even care about the grades at that point; I just knew that the reward for my hard work was that I would get to wear anything I wanted to school. My parents, true to their word, proudly signed my report card and told me that I could wear whatever my heart desired to school (within reason, of course).

I had 11 years of fashion experimentation to make up for, and I tried everything to figure out what my own personal style would be. Literally everything. A couple memorable outfits include wearing a camouflage-printed mini skirt over a pair of flared jeans (yes, really), and an entirely pink ensemble that included a polo tank (remember those?), a floral-printed corduroy knee-length skirt, and a pleather pageboy cap.

These days, and I rock a uniform of my own design: the weird stretchy black pants have transformed into my staple black skinny jeans (I usually have at least three clean pairs on hand at any given time), I love a good T-shirt dress, and wide-leg jumpsuits truly make my world go 'round. I've never forgotten my roots, though, and I feel like part of what I learned from wearing a uniform during the formative years of my life have never left me: I consider myself a pretty modest and simple dresser, and I will always put my work over what I look like that day (even if it means going sans-makeup and in sweats and a T-shirt in order to finish assignments on time).

Looking back, I can't thank my parents enough for making me endure what, at the time, seemed like the most unthinkable experience a pre-pubescent girl could go through. I was bullied for what I wore, and I emerged a stronger, more enlightened woman. And as much as I love my clothes and make an effort to present the best version of myself, my outward appearance will never matter if I'm not healthy in mind or body. Who knows — I might get tired of putting outfits together every day and just set up a uniform for myself anyway.