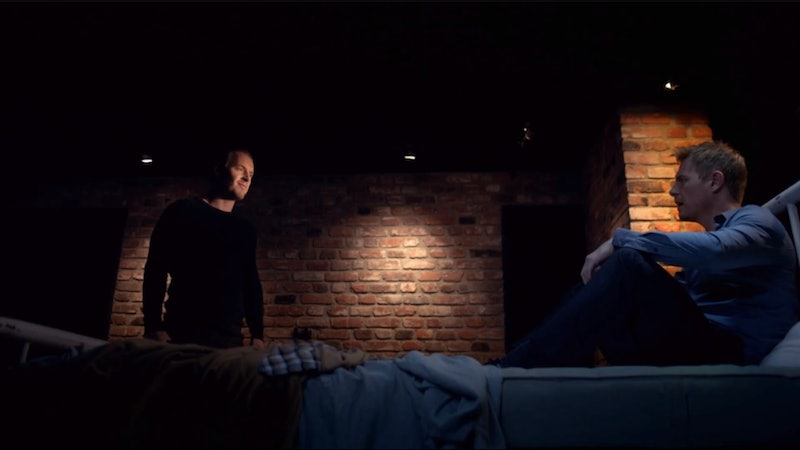 Lifetime movies aren't exactly known for their realistic plotlines, and while that's part of what makes them so fun to watch, it's also somewhat of a relief that My Husband's Secret Twin isn't based on a true story. The prospect of one day discovering your husband's evil twin brother has secretly replaced him is so ridiculous, it could only be the premise of a soapy psychological thriller. But it is, admittedly, also pretty terrifying to think about.

According to Lifetime's official description, the film follows married couple Melanie (Charlotte Graham) and Derrick (Rick Cosnett). They seem to be happy, until suddenly, Derrick's behavior begins to change. An increasingly suspicious Melanie decides to start investigating, and she soon uncovers a dark secret: unbeknownst to her, her husband has a (pretty unstable) twin brother named Alex who has been posing as Derrick and seemingly wants to eliminate him from the picture altogether.

While Derrick says in a trailer voiceover that Alex "has always been a psychopath," it's unclear what's driving Alex's actions (and more importantly, why he has that terrible British accent). It's possible that they were separated when they were young and Alex, believing Derrick has had a better life than him and feeling slighted, is seeking revenge. Or Alex is just evil and wants to destroy his brother's life simply because he can. This is a Lifetime movie, so there doesn't necessarily have to be a logical reason for Alex's behavior.

Ultimately, My Husband's Secret Twin will hinge around what happens to Melanie once she discovers the truth about Alex impersonating her husband. Trying to stop Alex is likely to put her in the firing line of his rage, so even if his original goal was to make her fall in love with him to hurt Derrick, Alex could suddenly decide to take Meredith out if things don't go according to plan. Sure, Meredith doesn't seem like the type to be easily intimidated, but that doesn't mean things won't turn deadly. The question is: will it be Alex's life, Derrick's life, or hers?