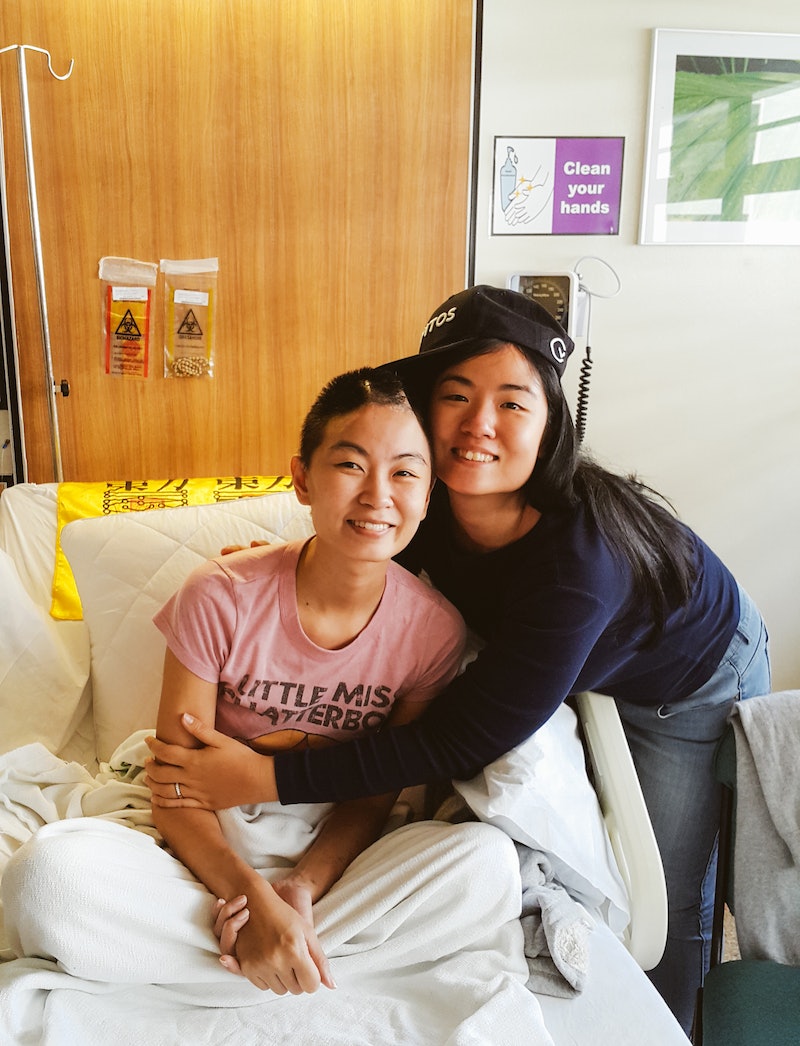 Spoilers ahead. A few minutes before my Captain Marvel screening started, I texted my sister Monique, 7,000 miles away in sunny Manila, Philippines. If we had been in the same country, we would undoubtedly have seen Captain Marvel — a movie in which the hero struggles to remember her past and who she is — together. "Enjoy! Go! Have fun!” she responded. “I love the movie. Made me cry. If I forget and have amnesia like Marvel, my sisters will tell me who I am.”

I thought that sentiment to be so profound Monique did, for a while, have a form of amnesia. And yes, her sisters told her who she was.

Two years ago, when she was 38, Monique suffered a serious fall on a business trip in Singapore, causing a traumatic brain injury that required three surgeries. She lived — barely.

What does it mean for a person who's still in the eye of the storm to see someone come out of it, scarred but victorious?

Our family, spread across the world in California, Illinois, and Manila, converged in Singapore to keep vigil. When she woke up from her coma after three weeks, Monique couldn’t tell the time or identify the country she was in, and had no memory of what happened to her. Unable to speak coherent sentences, she had to be restrained for fear that she would accidentally scratch her head, which incidentally, was soft because two large pieces of her skull had been removed in surgery to prevent the swelling in her brain from killing her. She bit me when I tried to hold her hand.

Three weeks in a coma had so deteriorated my sister that upon waking, Monique had no strength to sit up and instead leaned over her legs, eyeing us with suspicion. She called none of us by name. “Ach,” I whispered to her, calling her by the name I had used since birth, which means “eldest sister.” “Ach.”

“Ach, Ach,” she repeated, copying the sound. I could see the word held no meaning for her. I wondered if I would ever truly get her back.

But I did. Over many months, Monique regained all of her motor skills and most other facilities, despite a few lingering effects in the speech department. It took weeks for her to recover from post-traumatic amnesia, a temporary state of disorientation which occurs after many serious head injuries. Monique told us later, that while most of her long-term memories were preserved, some things were lost, like the words to her favorite songs or the prayers we had recited daily in school.

I sometimes think back on our experience in terms of Marvel movies. I had stayed behind in Singapore for over five months to help with Monique’s daily routine and care, while my siblings took turns visiting. When she was recovering at the hospital, Monique and I would watch the Guardians of the Galaxy and Avengers movies. Our first major family movie date after her accident was going to see Black Panther in theaters. We took a break from making tough decisions about her life post-accident to discuss our theories about Thanos’s “Snapture” in Infinity War.

Though she was safe in the hospital and there were no Kree, Skrulls, or Nick Fury in sight, I see plainly now why Monique saw herself in Carol Danvers in the most literal way. Left without crucial memories, both Monique and Carol had to piece themselves ? together. What does it mean for a person who's still in the eye of the storm to see someone come out of it, scarred but victorious? My sister saw Carol adrift and vulnerable, but not powerless. She saw Carol stand up, suffer grief, recover, fight back, and ultimately, find joy. Captain Marvel was every bit a reminder that she could do the same.

Star Brie Larson reminds me as much of Monique as her superhero counterpart does. The image of the actor glowing on the red carpet, celebrating her success, reminded me of Monique as I had seen her as I was growing up: as a corporate rock star, a traveler who had once ridden in the moonlight on the back of a handsome Italian painter’s motorcycle. But the work of a hero isn't always so glamorous.

Look online and you’ll also see footage of Larson doing all the hard work it took to become Carol Danvers: crushing it at the gym, pushing cars uphill, crawling across the ceiling. That effort reminds me of Monique after the accident — the hero who demanded double the recommended hours of speech therapy, who donned boxing gloves before her injuries had even fully healed, who danced at her wedding a year later.

When I saw Captain Marvel, I heard an echo of myself in Maria Rambeau (Lashana Lynch), Carol’s best friend and colleague. One of her standout scenes spotlights the gift of an affirmation — one woman reminding another that she is strong, she is powerful, she is brave. Its value is immeasurable.

My sister needed someone to take her to speech therapy, to hold an umbrella over head when it rained, to manage her array of medication. She needed someone to tell her again and again what it was like for us when she was in her coma. She needed us to remind her that the brain damage, which had robbed her of so much, had not taken the core of what made her legendary. She needed us, her family, her husband, her friends, her sisters, to tell her who she was, and that’s what we did.

As Monique started to regain her skills and re-learn sentence construction and tenses, my other sister Joliot and I cheered her on every single day, brimming with hope. I clearly remember holding Joliot’s hand and whispering, “I still believe that Ach can have this full and wonderful life. I really do.”

When Joliot wasn’t in Singapore on week-long visits, she was on Facetime with Monique, poring through worksheets, editing her halting sentences. Between the three of us, Joliot is the one with two small daughters, who understood when their mom had to get on a plane and fly thousands of miles away to take care of their Auntie in the hospital. When they visited Auntie Monique later, they had a strong mom to reassure them that while it was scary that Auntie was hurt, she was getting stronger, that they had something to give to Auntie, too: time, patience, and lots of love.

Despite all that love from friends and family, I know that post-accident, Monique often struggled with positive messages she had herself espoused in the past. “Excellence, not perfection,” she had told me as a child. “She believed she could, so she did,” read the giant sticker on her laptop. But could it still be true for someone still picking up the pieces of speech, of memory, still reeling from tragedy?

The answer, however fictional, was there onscreen in Captain Marvel. And while Carol Danvers and Monique Ong occupy a different universe, and are different in age, race, occupation, and situation, my sister saw through to the core of what made them the same. After every fall, Carol Danvers got back up, no superpowers needed. And so could Monique Ong.

I held my sisters in my heart when I watched Captain Marvel. There is, at the movie’s core, a firm belief in a woman’s technical and professional abilities, plus an acknowledgement that friendship and loyalty among women are absolutely mission critical. Seeing Maria counter Carol’s self-doubt, then seeing Carol and Maria fly together, bringing their dreams full circle...it all made me want to stand up and cheer.

After every fall, Carol Danvers got back up, no superpowers needed. And so could Monique Ong.

While representation in movies is a hot topic, I've often found it hard to articulate why it is so precious. But sometimes, representation gives way to revelation. A woman still suffering from permanent effects of traumatic brain injury is reminded that feeling unmoored and untethered does not mean being doomed to lose, to disappear, to die. Suddenly, a dire situation feels a little less so. And then, the woman is struck with a wonderful truth that has somehow transcended the fictional narrative. The truth condenses into a powerful statement that she sends to us, and I repeat it to you.

“If I forget… my sisters will tell me who I am.”