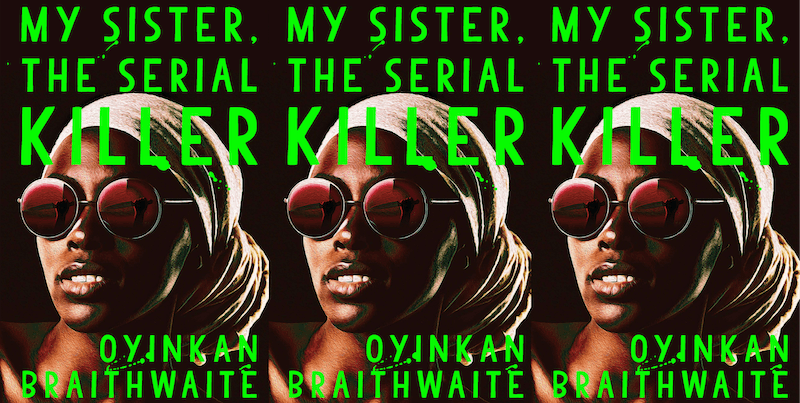 Ayoola and Korede are sisters: the former beautiful, careless, and brutally cavalier; the latter loyal, protective, and inextricably complicit. Because Ayoola has an unfortunate habit, one you might surmise from the title — she kills her boyfriends, purportedly in self-defence, and Korede is left to disappear the evidence. That's the irresistible premise of My Sister, the Serial Killer by debut author Oyinkan Braithwaite, the book you absolutely must get to reading if you haven't demolished it already.

Friends, I'm delivering unto you a gift. This time, you will be the one to recommend a book to your friends that will enrapture the whole group chat. You will suggest a book to your reading group that even the most resolutely critical member will reluctantly adore. You will be the first to read the book you're guaranteed to see all over newspapers and end of year top 10 lists and Twitter. Braithwaite's novel is already a sensation — and it's only going to inflate.

As many critics have pointed out, My Sister, the Serial Killer is less about the aforementioned serial killings than the sisterhood of Ayoola and Korede, both acutely compelling in their own, very different ways. "I'm not writing crime in the traditional sense. It wasn’t important to me to explore the murders, or to explore the victims, so much as it was to explore this dynamic between the two sisters," Braithwaite told Vulture. "Ayoola is childlike because Korede is always there to protect her, and Korede feels she always has to protect her because Ayoola is childlike."

Indeed, there's a childhood precedent for Ayoola's violence: the sisters grew up with an abusive father, whose knife Ayoola now wields. But while the brutality of men saturates the novel as it has the sisters' lives, Korede's not certain it's her sister's primary motive for dispatching her boyfriends. In fact, she increasingly begins to suspect something more sinister: that Ayoola just enjoys killing.

The business of cleaning up after your murderous — but enduringly lovable — sister isn't a sustainable one, as you might imagine. For Korede, her breaking point is Tade, a doctor at the Lagos hospital where she works as a nurse. Korede silently adores Tade, but Tade is enchanted by Ayoola, as most men are. Their relationship proves the biggest challenge to Korede's sisterly loyalty: his body is one she'd struggle to sink into the water.

If my evangelism won't suffice (though it should, and I will absolutely take that personally), perhaps My Sister, the Serial Killer's critical reception will do a little more to convince you. "In its darkly comic depiction of two women teaming up against the powerful, abusive men in their lives, My Sister, the Serial Killer feels like an ideal book for the present moment," the Washington Post says.

The Los Angeles Review of Books calls Braithwaite's prose "as deft, personal, and economic as it is evocative." And the New York Times' take: "This scorpion-tailed little thriller leaves a response, and a sting, you will remember." Take their word, or take mine: either way, just make sure you read it.

Buy My Sister, the Serial Killer from Amazon.