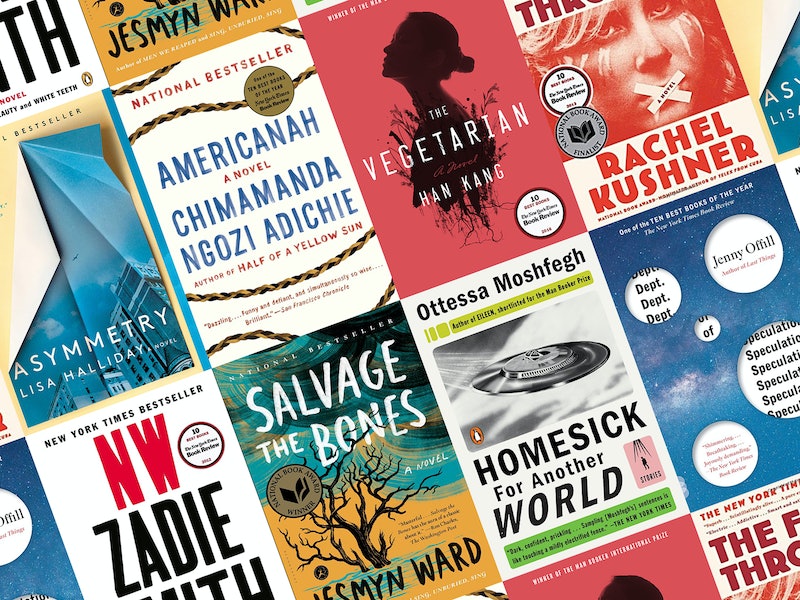 In March 2018, the New York Times published a list of what they declared are the 15 vanguard books by women writers in the 21st century.

To my great embarrassment, I hadn’t read a single one.

I acknowledge that I'm a late adopter — I haven’t even watched Godfather yet. I’m also an eclectic reader, fond of Montaigne as much as Harry Potter. And, having grown up in India, I've never been entirely au courant with American literature.

But this stung! I myself am a woman writer. I have a MFA! (Granted, in nonfiction.) So, I committed to the Julie-and-Julia-eque mission of reading every book on the New York Times’ list by the end of 2018.

With five of these books — The Essential Dykes to Watch Out For by Alison Bechdel, Americanah by Chimamanda Ngozi Adichie, Outline by Rachel Cusk, My Brilliant Friend by Elena Ferrante, and Dept. of Speculation by Jenny Offill— I fell in love. Their characters seemed like family, like friends, like me.

With another five of the books — Mislaid by Nell Zink, NW by Zadie Smith, Salvage the Bones by Jesmyn Ward, Homesick for Another World by Ottessa Moshfegh, and The Flamethrowers by Rachel Kushner — I struggled. Each is critically acclaimed, and I greatly admired the vision and wit of their authors. Yet, I just didn't like them.

The remaining five books on the list required closer reading and study before I could get under their skin — or they under mine. Read more about them at the end of this list.

What follows is my personal Top Ten list of contemporary books by women authors, culled from the New York Times' list. Love 'em or hate 'em, you've got to read them.

1. The Essential Dykes to Watch Out For by Alison Bechdel

In this graphic novel, Bechdel’s band of LGBTQ protagonists is illustrated richly and realistically, with flabby tummies and underarm hair. The writing is equally lovely. Here’s how one scene opens:

"After the last revelers depart, our newlyweds unplug the phone and retire to their matrimonial futon in search of new heights in conjugal rapture."

I left this book with a suddenly-exploded awareness of the complexity of relationships, economics, and politics within the lesbian and transgender communities. And, in fact, within all of us. How can we earn well without selling our souls? How can we respect democracy even when it ignores us? How should we love? These are the questions of Dykes to Watch Out For.

Like Alison Bechdel outlines and explains LGBTQ identities, Adichie carefully categorizes and explains African-American identities. She also writes about women's bodies so honestly, I couldn't tear my eyes off the page. Sample this:

"There were people thrice her size on the Trenton platform and she looked admiringly at one of them, a woman in a very short skirt. She thought nothing of slender legs shown off in miniskirts — it was safe and easy, after all, to display legs of which the world approved — but the fat woman’s act was about the quiet conviction that one shared only with oneself, a sense of rightness that others failed to see."

Outline is a fantastic idea: a story told in 10 conversations. The protagonist travels to Athens to teach writing, and speaks to her neighbor on the plane, her old friends, her students, and others.

The power of this book lies in how well it mimics the tricks and deceptions of real-life conversations — where we glorify ourselves, exaggerate wins and losses, or gossip. Every conversationalist in Outline is unreliable, like us, revealing or hiding choice details.

4. My Brilliant Friend by Elena Ferrante

Elena and Lila grow up near Naples in the '50s, competing for good grades, learning about men, and becoming fast-but-difficult friends.

In Lila, you will find one of the most hypnotic female characters of contemporary literature. She is plain, then beautiful. Ferocious, but wounded. Brilliant, and unpredictable. Lila is the character every writer dreams of creating.

And the relationship between Lila and Elena  —  which forms the heart of the book  —  reminds me so fondly, terribly, and precisely of the love and fights shared with my own best friends. Read this with your childhood buddy.

5. Dept. of Speculation by Jenny Offill

Dept. of Speculation is the perfect miniature of a marriage, and you can read it in a few hours. Offill writes short chapters filled with even shorter paragraphs, like little notes to the reader.

I got married a few years ago, and one of my favorite descriptions from this book is of a marital fight:

"The husband and wife whisper-fight now in the gloves-off approved way. She calls him a coward. He calls her a bitch. But still they aren’t that good at it yet. Sometimes one or the other stops in the middle and offers the other a cookie or a drink."

Minimalist painters challenge themselves to conjure a recognizable image using the least number of brushstrokes. In this book, Smith is a masterful minimalist. She can move plot with no more than two short phrases.

Sometimes, however, her experiments with prose overwhelm. The narrative is choppy and fractured. The sentences are terse, splintered.

My brain was always impressed. But my heart was sometimes left untouched. I wished the New York Times had recommended Smith’s White Teeth instead, which had left me gobsmacked for both its intellect and its big, big heart.

In this boundary-bending novel, a white lesbian poet marries her white gay professor, has two children, then runs away with her daughter and masquerades under a ‘black’ identity. As comic and clever as Mislaid is, I never felt particularly sorry for the professor and his son, even after the two women of their family run away. Nor do the grandparents appear to care.

I felt the book follows a contemporary trend of writing tragic stories from a witty distance. I read such books casually, only to later smack my head and realize, "Good God, what a sad and horrific plot!"

These stories are far from Oedipus howling and blinding himself, far from Shakespeare’s passionate soliloquies and stabbings. And while I admire this contemporary coolness, its wit and irony, I occasionally miss old-fashioned high emotion.

8. Salvage the Bones by Jesmyn Ward

Salvage the Bones is the uneasy calm before a storm. The book’s narrator is fifteen years old, a fond sister, powerful runner, and is studying Greek tragedies at school. She is pregnant, and her family is preparing for Hurricane Katrina.

Unfortunately, I found Salvage the Bones relentlessly grim. But what else did I expect from the story of a dirt-poor family battling poverty and a giant hurricane?!

I failed this book as a reader because, no matter how widely I read, I continue to value escapism over reality. However, Salvage the Bones is an important story, and beautifully told.

9. Homesick for Another World by Ottessa Moshfegh

If you are fed up of the candy-floss gloss of Instagram, I’d recommend this short-story collection. Moshfegh writes about ugliness with tremendous humor and attention-to-detail. Look at this:

"'And you know what else?' he said, squatting in the bathtub and slathering the towel between his legs. His towels were all stenched with mildew and streaked with rust stains, by the way. 'I'm handsome.'"

While I loved such descriptions, some stories felt too bizarre. Though they are set in real cities, I doubted that their oddball characters could exist in real life. Perhaps I just don't go out enough.

10. The Flamethrowers by Rachel Kushner

The blurbs and reviews inside The Flamethrowers’ use “brilliant” six times, “dazzling” and “sexy” multiple times, and “white-hot” twice. So naturally, I entered this book with some skepticism.

Kushner does create epic, atmospheric scenes: motorcycle races in the salt flats of Nevada, labor-union riots in Rome. But the book’s protagonist, a young girl like me, is often such a tag-along behind powerful men, that I got quite irritated. I suspected we wouldn’t be friends.

I’m worried by what this says about me. Do I judge young female protagonists more harshly than if they were male? If I don’t approve of the heroine’s moral decisions, do I throw out the entire book? If so, why do I read at all? Do I read only to find characters like me, or to learn about worlds outside my own? I hadn't thought as intently about these questions till I read The Flamethrowers.

The other five books:

The remaining five books on the New York Times’ list — How Should a Person Be? by Sheila Heti, Her Body and Other Parties by Carmen Maria Machado, The Vegetarian by Han Kang, Asymmetry by Lisa Halliday, and American Innovations by Rivka Galchen — I must return to and study, because they gradually reveal layers of meaning.

Asymmetry is half an American love story, and half an account of an Iraqi man detained in London. It even ends with a study guide and a list of questions. How Should a Person Be — written as a novel, essay, and play — must be combed through to understand Heti’s creative choices. Her Body and Other Parties is a collection of haunting short stories, but I couldn't de-code the opening story's symbolism till I read an essay on it. The Vegetarian functions both as a story of a woman in South Korea, and as an allegory for the nation's history. My first read was vividly memorable, but I'd need to learn more about South Korea's history before understanding the allegorical layers. And to fully appreciate American Innovations, I’d need to re-read all the short stories by Borges, Gogol, and others that it riffs off. These five books are like detective hunts with clue — when read correctly.

Ultimately, these 15 books did exactly what books are meant to do: seduce us, exasperate us, or make us think. If you're looking to read more books by women this year, I'd highly recommend starting here.