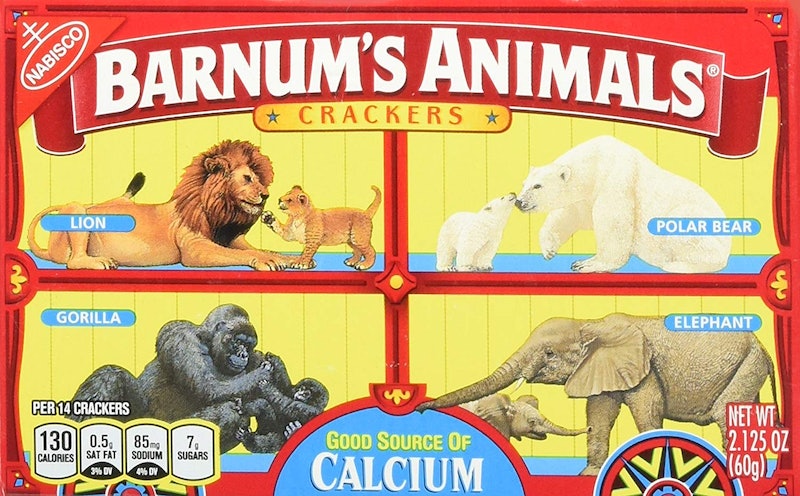 Animal crackers have been roaming our shelves for over a century, and they're the one snack that has pretty much remained the same throughout generations. Named after P.T. Barnum, whose title you'll recognize if you watched Hugh Jackman and Zac Efron belting out tunes in The Greatest Showman recently, animal crackers were introduced by Nabisco in 1902. The brand is still an iconic, recognizable part of childhood today — it seems like people have and will always love the quintessential snack. Consistency has been key for animal crackers across history, but they're about to get the biggest makeover they've ever had: For the first time in 116 years, the animal crackers will be released from their cages that were depicted in the front of the packaging, according to the AP.

Up until now, the wildlife that graced the front of animal cracker packages all had one thing in common: They were pictured in cages. Though they appear to be in enclosures in the boxes you see on shelves today, the original packaging actually featured the animals behind cage bars and was more reminiscent of a traditional circus. Just announced earlier today, the zebra, elephant, lion, giraffe, and gorilla on the little red box will officially roam free — and it's all because of prompting from People for the Ethical Treatment of Animals (PETA).

PETA has made an effort to protest the use of animals in circuses for decades. "Elephants, tigers, and other animals that circuses use to entertain audiences do not stand on their heads, jump through hoops, or balance on pedestals because they want to. They perform these and other difficult tricks because they’re afraid of what will happen if they don’t," PETA explains on their website. In 2016, the organization wrote to Nabisco's parent company, Mondelez International, to call for a redesign of cracker packaging that displayed these animals in cages.

“Given the egregious cruelty inherent in circuses that use animals and the public’s swelling opposition to the exploitation of animals used for entertainment, we urge Nabisco to update its packaging in order to show animals who are free to roam in their natural habitats,” PETA said in the call-to-action letter, according to the AP. Two years after they pleaded their case, Mondelez International has made the decision to redesign the box's illustration. The newly designed boxes are already on shelves, and animal-lovers will be happy to see the wildlife roaming free on grasslands — gone is any trace of the animals being shown in boxcars on their way to a circus.

“When PETA reached out about Barnum’s, we saw this as another great opportunity to continue to keep this brand modern and contemporary,” Jason Levine, Mondelez’s chief marketing officer for North America, said in a statement. Barnum's Animals crackers have seen animal welfare awareness redesigns in the past, but each one only lasted for a limited time — this is the first permanent change in the packaging's history.

According to AP, over 80 cities in the United States have "fully or partially banned circuses with wild animals." Even though it's just a snack box, the redesign of animal cracker packages is a step in the right direction. Roam free, animals.