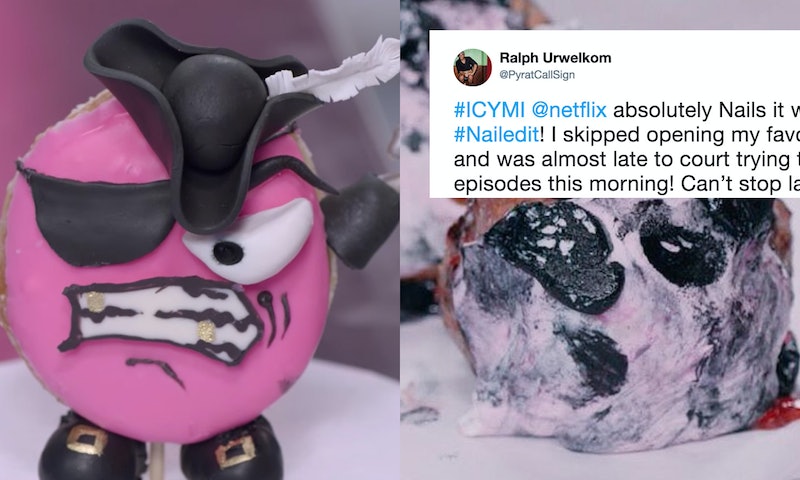 How many times have you found the perfect recipe on Pinterest only for your attempt to recreate it turn out absolutely nothing like what’s in the photos? Well, now you don’t have to feel bad about your burned baked goods or epic DIY-food fails, thanks to Nailed It, Netflix’s new culinary competition series. The show, which premiered March 9, features amateur bakers attempting to recreate elaborate treats for a chance to win $10,000.

Traditional baking shows can sometimes make less-than-stellar bakers feel inadequate about their homemade creations. I mean let’s be honest: it’s not the easiest thing in the world to cover a cake in fondant and have it look flawless. And attempting to hand-make those little sugar paste flowers is definitely not a walk in the park. Fortunately, judging by the trailer, Nailed It will celebrate the epic fails along with the major wins.

Taking a more lighthearted approach to the art of pastry-making compared to other shows that deal with sweet treats, Nailed It is hosted by comedian Nicole Byer, of the series *Loosely Exactly Nicole, and Jacques Torres, a legendary New York City chocolatier. Throughout the series contestants will attempt to recreate their own version of Pinterest-inspired treats including three-tiered wedding cakes, portrait cookies, and jelly-donut towers fit for pirates.

Many think of the phrase “nailed it” as something positive — and for the most part, it is. But in the online world the phrase is often used sarcastically when “criticizing the quality of success, especially in response to attempts at recreating recipes or craft projects,” according to Know Your Meme. And based on the teaser, many of Nailed It contestants' attempts to recreate Pinterest-worthy desserts on the show are utter disasters – which makes this the perfect title for the series.

And the contestants aren’t the only ones who aren’t exactly kitchen-savvy. In fact, Byer admitted to Food & Wine that her culinary creations are comparable to the ones viewers will see on Nailed It.

“I don't really cook or bake, but when I do you better believe it’s from a box and/or it will be burnt, and I'm drinking wine as I f*ck it up,” Byer said. “I reheat a lot of things and once I put one of those cardboard McDonalds containers into the toaster oven and it caught fire. And that was wild.”

The first season of Nailed It includes six half-hour episodes, and Byer provides plenty of comic relief in between mixing and measuring. She told the publication that humor is a crucial ingredient in a good baking show, especially one in which the challenges push the contestants to their limits. Though the goal is ultimately to make the best recreation (and win the prize money!), fun isn’t compromised in the process according to the host.

But don’t be fooled. In addition to providing major laughs and plenty of un-Instagram-able desserts, Nailed It will also feature real tips and tricks viewers watching at home can apply to their own baking projects from expert guest judges like famed celebrity wedding cake designer Sylvia Weinstock and YouTube star and creator of How To Cake It Yolanda Gampp. Torres also shows his own method for perfecting the challenge bake in each episode.

So, whether you’re a professional brownie baker or one who doesn't know a tablespoon from a teaspoon, Nailed It has something for you. Even if it's just encouragement to laugh at yourself.