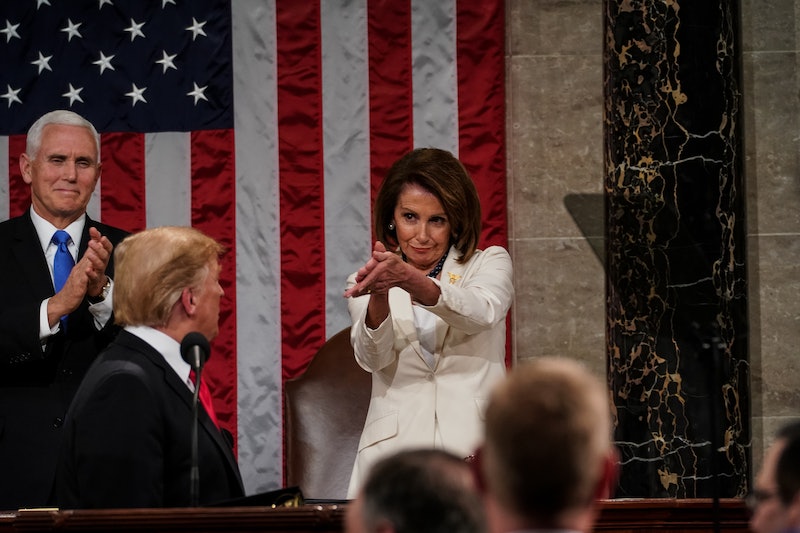 Several times on Tuesday, President Donald Trump's State of the Union (SOTU) address prompted highly visible responses from Democrats in attendance, including the Speaker of the House, who sat directly behind him. At one point during the SOTU, Nancy Pelosi clapped directly at Trump, prompting a pointed reaction from one of her daughters the following morning.

"#waybackwednesday - oh yes that clap took me back to the teen years," Christine Pelosi tweeted Wednesday morning. "She knows. And she knows that you know. And frankly she’s disappointed that you thought this would work. But here’s a clap. #youtriedit."

The clapping photo, which was almost immediately dubbed as iconic, was snapped just after the president made a plug for more civil, less partisan politics. His comments came less than two weeks after the federal government remained partially shutdown for over a month.

“We must reject the politics of revenge, resistance, and retribution, and embrace the boundless potential of cooperation, compromise and the common good,” the president said during his speech. Pelosi, who is engaged in an ongoing battle with the president regarding border wall funding, among other things, took the opportunity to stand up and clap — and, it seemed, send a message.

Appearing to simultaneously point at the president while also clapping with both of her hands, it seemed that the speaker was making a wordless statement. When Trump turned around, The Washington Post reported, Pelosi appeared to smirk.

Until this election cycle, Trump enjoyed a Republican majority in both the House and the Senate. But when Democrats took back the House after November's midterms, his relationship with Congress began to shift. Although the government remained closed throughout the first month of the legislative term, Pelosi quickly made clear that she intended to stand her ground on major policy issues. She, supported by Senate Minority Leader Chuck Schumer and other congressional Democrats, refused to allow Trump's request for over $5 billion toward a new border wall to move forward, even though it meant that the government would remain temporarily shutdown.

In turn, Republicans long refused to pass any sort of compromise measure that would have reopened the government without providing the billions of dollars Trump wanted, and each side repeatedly blamed the other for the lack of motion. Reports from the shutdown indicated that several compromises without wall funding were proposed or floated throughout the impasse, but for weeks, no deal ever came to fruition.

Ultimately, however, one did, and the government's (temporary) reopening was cast by many as a solid win on Pelosi's behalf. This provided the backdrop for Pelosi's pointed clapping on Tuesday night.

While the president called for bipartisan political unity on Tuesday, the drama surrounding the most recent shutdown — which was the longest in U.S. history — was still fresh in the back of many people's minds. But even though he included that plea in his address, he once again doubled down on his demand that a new wall be built on the U.S.-Mexico border. It's not clear how another potential fight of wall funding might play out.