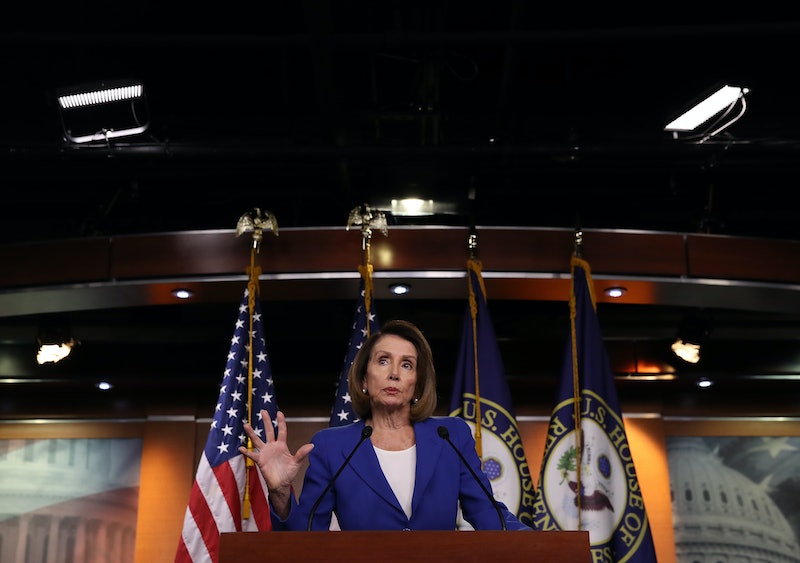 Speaking at the State of the Union Tuesday night, President Donald Trump repeatedly condemned so-called "partisan investigations," which was widely understood to be a jab at ongoing congressional inquiries into his administration, as well as the Russia probe. But after the speech, The New York Times reports, House Speaker Nancy Pelosi addressed Trump's "threat" head-on and said that the House would not be respecting the president's wishes.

"An economic miracle is taking place in the United States — and the only thing that can stop it are foolish wars, politics or ridiculous partisan investigations," Trump said on Tuesday, before a joint session of Congress. "If there is going to be peace and legislation, there cannot be war and investigation. It just doesn’t work that way."

Some, including Pelosi, understood those remarks to be a threat. Specifically, it appeared that the president was suggesting that the economy would suffer if the various investigations into both him and his 2016 campaign were to persist. It also evoked memories of the recent 35-day government shutdown, which lasted so long largely because he and Democrats could not come to an agreement regarding whether or not Congress would allocate more than $5 billion for a new U.S.-Mexico border wall. (Another fight over government funding could potentially take place within days, if Congress can't agree on a long-term spending package by the end of next week.)

"It was a threat. It was an all-out threat,” Pelosi told reporters on Wednesday, according to The Hill. “The president should not bring threats to the floor of the House.”

"It’s our congressional responsibility," Pelosi said of ongoing investigations, per The Times, "and if we didn’t do it, we would be delinquent in that."

In fact, hours later, the House Intelligence Committee opened a new investigation into Trump, according to The Times, seeking to determine whether foreign countries are actively influencing him, which explicitly defies his SOTU warning.

“Our job involves making sure the policy of the United States is being driven by the national interest,” Intelligence Committee Chairman, Adam B. Schiff told The Times, “not by any financial entanglement, financial leverage or other form of compromise.”

Trump reportedly dismissed Schiff as "just a political hack" after receiving news about the new investigation," The Times reported. "He’s trying to build a name for himself,” Trump said, adding, “It’s called presidential harassment. And it’s unfortunate. And it really does hurt our country.”

Pelosi wasn't the only Democrat to push back against the president's investigation comments, either. Several party figures weighed in over the course of the following day.

"There's no question it was a veiled threat," Rep. Jackie Speier said on Hardball With Chris Matthews on Wednesday.

And in speaking with The Hill, House Democratic Caucus Chairman Hakeem Jeffries said, "We will not be bullied by the president of the United States."

With tensions already so high barely one month after a Democratic majority was sworn in to the House, it's unlikely that they will simmer any time soon. And it will likely be compounded by the beginning of a brand new investigation.