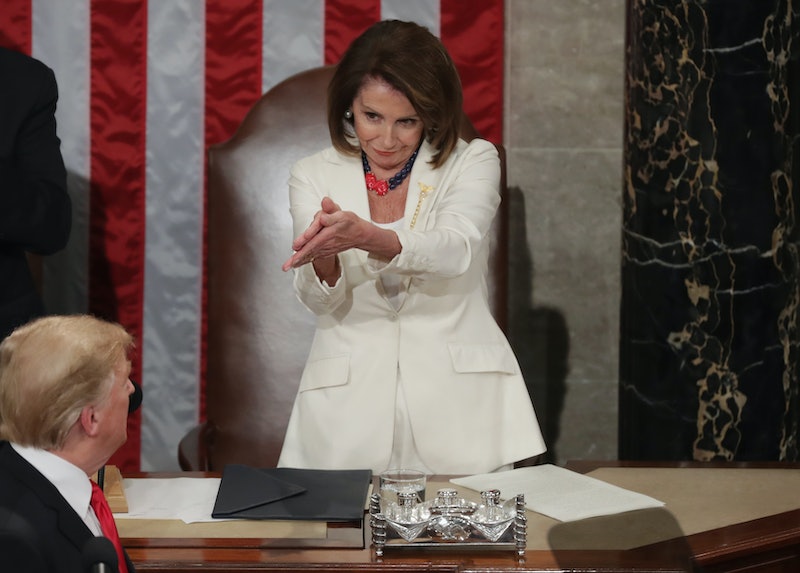 Her State of the Union performance inspired a world of memes — and now, the speaker of the House is offering fans something to commemorate the event. Nancy Pelosi is selling "Patron Saint of Shade" merchandise online, in the form of t-shirts and tote bags. Via her online store, diehard Pelosi supporters can now forever remember that famous moment when she applauded POTUS during his annual address.

Though it seems that Pelosi is now buying into the widely-believed perception that she was throwing shade at Trump when she clapped, she didn't admit that at first. Following the SOTU, Pelosi told reporters that her clapping "wasn't sarcastic," according to Fox News. She added, “I wanted him to know that was a very welcome message."

However, Pelosi's daughter, political strategist Christine Pelosi, immediately set the record straight. On Feb. 6, she tweeted, “Oh yes that clap took me back to the teen years. She knows. And she knows that you know. And frankly she’s disappointed that you thought this would work. But here’s a clap. #youtriedit"

It's not just "shade" that Pelosi is selling on her online store, though. It might surprise you to know that her store is actually filled with a number of other items. These include a series of products that highlight another pivotal and recent moment of Pelosi's career: when she met with POTUS and told him not to underestimate her power.

Specifically, when Pelosi met with Trump in a public meeting during the government shutdown, and Trump claimed that Pelosi was “in a situation where it’s not easy for her to talk right now,” per The New York Times. The publication notes that Pelosi replied, “Mr. President, please don’t characterize the strength that I bring to this meeting as the leader of the House Democrats, who just won a big victory."

Based on that moment, her website has a t-shirt or sweatshirt that has the phrase "Please don't characterize the strength that I bring" on it. The sweatshirt is for sale for $39, and two different styles of t-shirts with that phrase are for sale for $22.

There's also a t-shirt that has a cartoon sketch of Pelosi in her red-orange coat, which she was photographed wearing when she left her meeting with Trump during the shutdown. The shirt's caption reads, "Down with NDP," and is also for sale for $22.

Maybe another t-shirt will be coming to the online store soon, in the wake of comments Pelosi recently made about whether or not she thinks Trump should be impeached. To The Washington Post on Monday, Pelosi said, "Impeachment is so divisive to the country that unless there’s something so compelling and overwhelming and bipartisan, I don’t think we should go down that path, because it divides the country."

Then she added another opinion: "He's just not worth it."