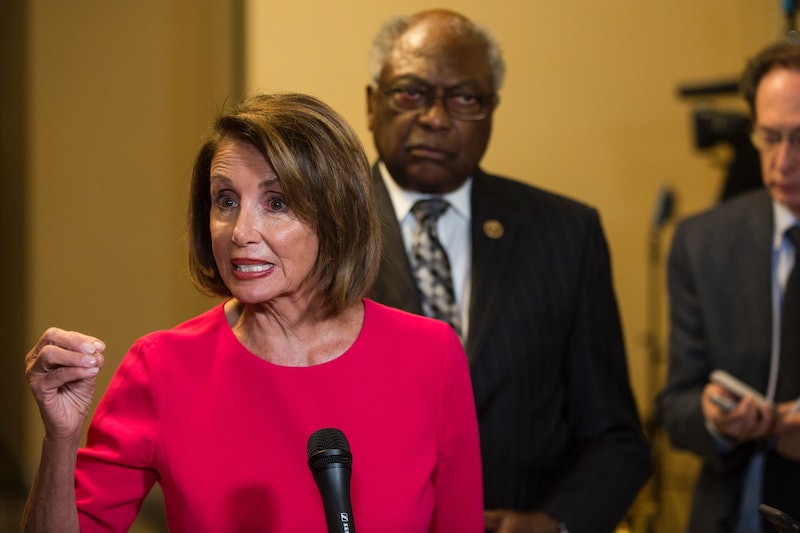 Thursday marked the 12th day of the government shutdown with no sign that the fight over budget appropriations is nearing a resolution. The new speaker of the House has made it clear that she won't just acquiesce to President Donald Trump's demands, and she reiterated that to reporters on Thursday. When asked about her funding parameters, Nancy Pelosi joked that Trump's border wall might get $1 — if he's lucky.

"Is there any situation in which you would accept even a dollar of wall funding for this president in order to reopen government?" a reporter asked.

When pressed, she dropped the quip and got serious. "The fact is, a wall is an immorality," she said. "It's not who we are as a nation."

She added that "it is a waste of money and opportunity cost to protect the American people," and suggested that border security money would be better spent increasing and modernizing infrastructure at ports of entry and investing in better technology to scan incoming cars for drugs. "There's so many things that we can be doing ... [that also] maintain who we are as a country," Pelosi said.

The government has been shut down since midnight on Dec. 21. President Donald Trump insists that he won't sign a budget appropriations bill unless it contains $5.6 billion for wall funding, and Senate Majority Leader Mitch McConnell says he won't allow a vote on any legislation to which the president is opposed. Of course, the Senate doesn't actually require Trump's support if a bill is approved by a veto-proof majority.

Meanwhile, Democrats in the House are attempting to push forward continuing resolutions that would reopen the government with appropriations at current levels (i.e. without new funding for a border wall). Pelosi held a Thursday vote on a bill that would fund all closed departments through Sept. 30 and the Department of Homeland Security through Feb. 8, and it passed easily.

But McConnell says he won't allow the Senate to vote on the bill, even though the chamber already approved continuing resolutions to fund the government — again, without border wall money — on Dec. 19.

"This is not a wall between Mexico and the United States that the president is creating here," Pelosi added. "It's a wall between reality and his constituents."

The speaker argued that Trump is trying to redirect attention away from cuts he wants to make to Medicaid, Medicare, and Social Security, his administration's efforts to get rid of anti-pollution regulations, and other ways "he is hurting them." She referred to the president as "a master of diversion."

Thursday was the first day of divided power in Congress. If any liberals fear that Pelosi may end up caving to pressure and allow wall funding, she wants you to know that she has absolutely no plans to do that.