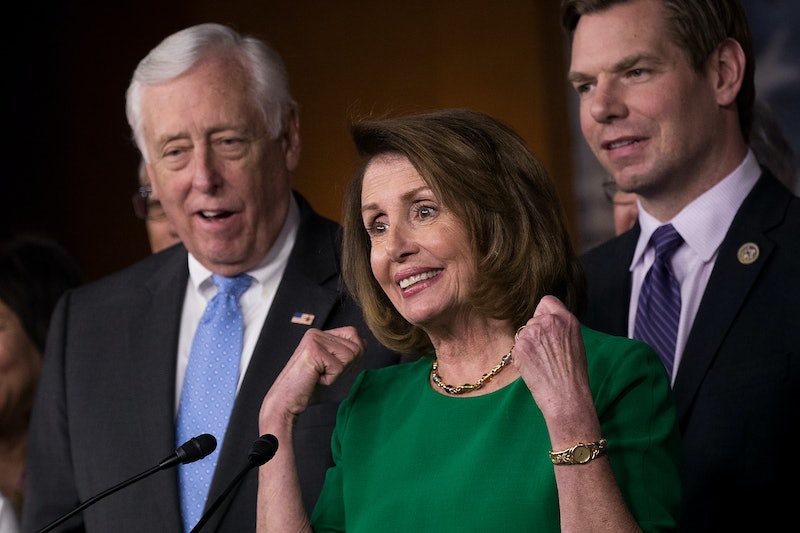 On Friday, House Republicans backed down on their much-touted repeal and replace plan for the Affordable Care Act, when they pulled the bill from the floor. The move is seen as a massive embarrassment for House leadership and the president, who failed to secure enough votes from moderate members of the ruling party and the most conservative Republicans. Democrats weren't shy in during their victory lap on Friday, taking to Twitter to gloat about the failure. One Democrat in particular was overjoyed about the American Health Care Act's failure: Nancy Pelosi took off her heels and jumped for joy after the AHCA was defeated. Yes, literally.

At a Friday rally organized by MoveOn, which describes itself as the "largest independent, progressive, digitally-connected organizing group in the United States," the House minority leader removed her heels and led a gathered crowd in a jump for joy. In other words, she was pretty happy about the bill temporarily biting the dust. "Today is a victory for the American people," Pelosi said at a news conference after the bill's failure, according to CNBC.

As CNBC noted, a reporter brought up at the conference that President Donald Trump blames Democrats for the AHCA's defeat. "Did he blame us for the defeat of his flagship issue?" she asked. "We'll take credit for that."

Even if Pelosi wants to take credit for the defeat, it's hard to imagine how that would be possible. Republicans hold the majority in the House and the Senate and, as The New York Times points out, are largely leaderless. A more credible source to blame could be the far-right House Freedom Caucus, who refused to budge on the bill, which they said too closely resembled Obamacare.

Trump, a master in the art of spin (even if he's not, as he professes, on of the art of the deal), said that this isn't a failure. Instead, this has cleared the way for Obamacare to completely implode. Which, of course, he has predicted all along. “I’ll fix it as it explodes,” he told Robert Costa of the Washington Post. “They’re going to come to ask for help. They’re going to have to. Here’s the good news: Health care is now totally the property of the Democrats.”

Trump went on to tell Costa that the "biggest losers" are Pelosi and Chuck Schumer, the Senate minority leader. "Because they own the disaster known as Obamacare," he said.

I'm going to let Pelosi put her heels back on before she addresses that one.