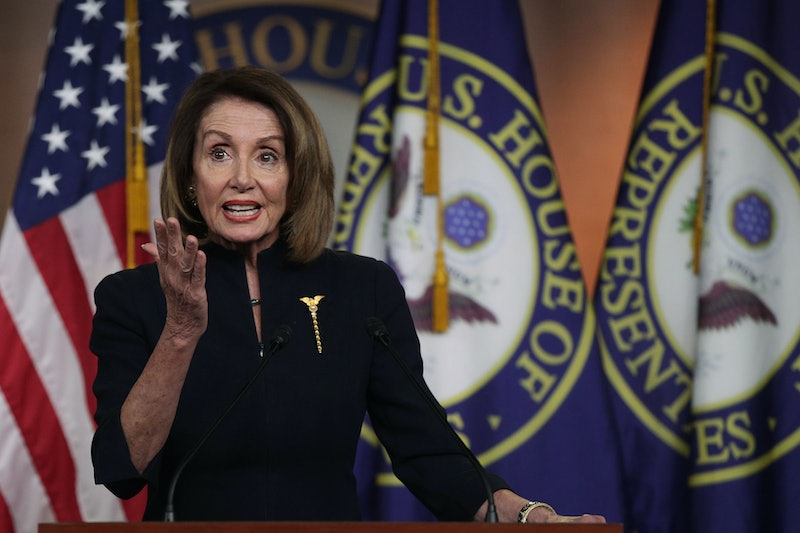 While some members of the Democratic Party have expressly called for impeaching President Donald Trump, Nancy Pelosi, the House speaker, appears not to be on board with the idea. In an interview with The Washington Post published on Monday, Pelosi said she doesn't support impeachment, explaining that Trump, in her words, is "just not worth it."

"I’m not for impeachment," Pelosi told the publication, bucking the calls from some prominent Democrats — including Reps. Pramila Jayapal, Rashida Tlaib, Joaquin Castro, and Al Green — who have suggested impeaching Trump in the past. "I’m going to give you some news right now because I haven’t said this to any press person before. But since you asked, and I’ve been thinking about this: Impeachment is so divisive to the country that unless there’s something so compelling and overwhelming and bipartisan, I don’t think we should go down that path, because it divides the country."

The House speaker also said that she was not worried about the future of the country. Pelosi told The Post that America was "great," in part because it has the "strongest foundation." However, she said that she didn't believe the country could withstand a second term under Trump. "So we have to make sure that doesn’t happen," Pelosi told The Post.

For his part, Trump has rebuffed some of these calls for impeachment. In a recorded clip in January, Tlaib, a Democrat who represents Michigan, vocalized her views and supported the idea to "impeach that motherf*cker" while referring to Trump. Though her comment sparked some backlash, Tlaib stood by it, saying on Twitter, "I will always speak truth to power. #unapologeticallyMe."

In response, Trump said Tlaib's comment was "a great dishonor to her and to her family." He added, "I thought it was highly disrespectful to the United States of America." On Twitter, he also said, "They only want to impeach me because they know they can’t win in 2020, too much success!"

Pelosi's reluctance in joining her colleagues' calls for impeachment isn't new. During an MSNBC town hall debate after Tlaib's comment, Pelosi said that the urge to impeach the president was "legitimate," but advised against it. "Impeachment is a very divisive approach to take and we shouldn’t take it...without the facts," Pelosi said at the time.

Pelosi explained that she isn't as enthusiastic about the prospect of impeaching Trump as some of her colleagues because she has seen first-hand what it's like for the country when a president does get impeached. "It was terrible when we were here in the 1990s and [Newt] Gingrich was speaker and impeached the president, Bill Clinton," Pelosi told The Post. "There’s no question that that was horrible for the country. It was unnecessary and the rest."

While she may not be in favor impeaching him, Pelosi didn't mince words when asked about her thoughts about Trump. "I mean, [he is] ethically unfit," Pelosi told The Post. "Intellectually unfit. Curiosity-wise unfit. No, I don’t think he’s fit to be president of the United States."