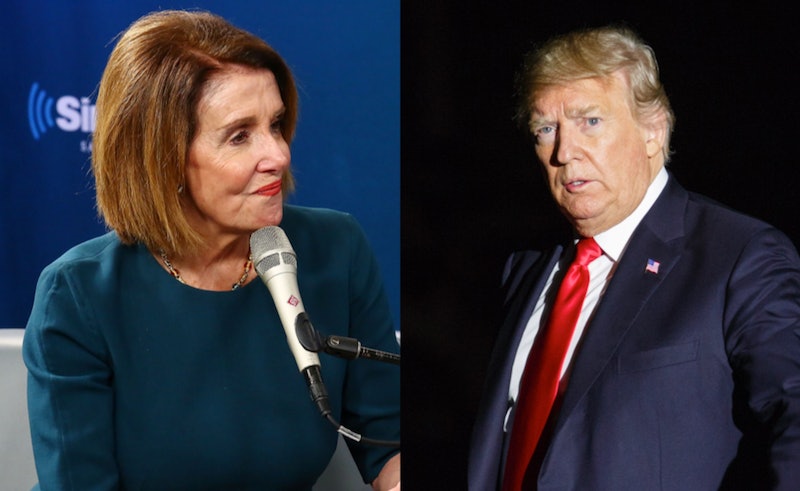 The House minority leader seems impatient with toxic masculinity right now. While speaking to Harvard University's Institute of Politics on Tuesday, Nancy Pelosi said Trump's border wall is a "manhood issue" that she isn't willing to deal with. She argued that Democrats shouldn't leverage any of their own priorities against funding for his wall if they win control of Congress in November.

"It's immoral, expensive, ineffective and not something people do between countries," Pelosi told the audience, according to The Washington Post. "In any event, it happens to be like a manhood issue for the president, and I'm not interested in that."

Many pundits have suggested that Trump fears walking back actions and promises because he doesn't want to look weak (strength is, of course, stereotypically associated with masculinity). A senior White House official told Axios that's why he didn't want to stop family separation even after he was "moved" by stories coming from the border. The wall has been known as Trump's signature project since his presidential campaign, and he would undoubtedly receive significant blowback if he abandoned the idea.

From the beginning of Trump's campaign, analysts argued that his appeal partly came from a display of hyper-masculinity. One 2016 PRRI/Atlantic poll found that he was especially popular among voters who believed the United States had become too "feminine." In particular, discussions around the border wall — a symbol of brute force against migration — often use masculine-coded terms. In 2016, The Los Angeles Times described Trump's speeches about the wall as "chest-thumping" and Newstalk called them "aggressive."

Many believe that this dynamic stretches far beyond Trump. Writer Jess Zimmerman recently argued in Slate that the Republican party as a whole is associated with masculinity, whereas the Democratic party is feminized and often seen as "weaker" than the GOP.

Bringing up the example of Brett Kavanaugh's anger versus Christine Blasey Ford's restraint in last month's Senate hearing, Zimmerman wrote that the party binary limits "who's expected to be reasonable and who gets to be stubborn, who keeps the peace and who advocates force, who makes compromises and who makes demands, who can and can't successfully run a human tantrum for president." She notes that even the Democratic and Republican agendas are gendered: Whereas liberals often prioritize equality, emotions, and human security, the conservative ideology often revolves around business, national security, and "the wielding of physical and economic brutality."

Which brings us back to Pelosi's comment about Trump's "manhood issue." She's certainly not alone in her opinion; the mainstream liberal consensus seems to be that many of the president's decisions are rooted in toxic masculinity. And his "manly" appeal is undoubtedly still a major source of his popularity on the right. Just last week, Kanye West suggested in an Oval Office meeting that Trump's "male energy" was one reason he likes the president so much.

Of course, immigration policy shouldn't be treated as a "manhood issue" — most people would agree that it is a human rights and national security issue. But as Pelosi sees it, Trump's obsession with the border wall is based less in good faith and more in a need to assert masculine-coded power.