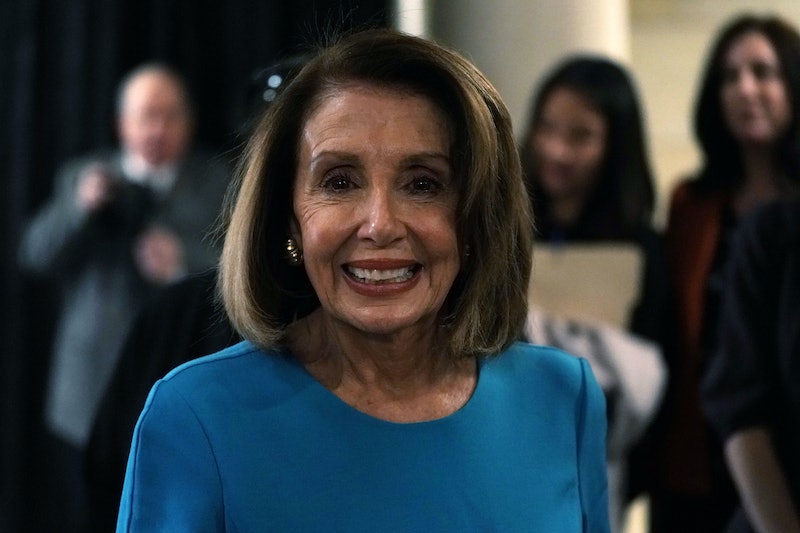 After weeks of negotiations, Nancy Pelosi's bid for Speaker of the House is basically clinched. A handful of current and incoming House Democrats had been opposed Pelosi's bid to serve as Speaker when the new Congress convened, but according to Politico, Pelosi has agreed to impose term limits on the Speakership in return for those lawmakers' votes.

“Over the summer, I made it clear that I see myself as a bridge to the next generation of leaders, a recognition of my continuing responsibility to mentor and advance new Members into positions of power and responsibility in the House Democratic Caucus,” Pelosi said in a statement announcing the deal.

Under the proposal, Democratic leader in the House will propose a rule under which lawmakers in the top three House leadership positions — speaker of the House, majority leader, and majority whip — will be limited to four terms total in those positions. Democrats can be elected to the first three of those terms with a simple majority vote, but serving a fourth term will require winning support from two-thirds of the Democratic caucus, under the proposal. The rule will apply retroactively from 2007.

Pelosi says in her statement that proposal will be put up for a vote by Feb. 15 — and, crucially, that she will abide by its restrictions regardless of whether it passes. In exchange, seven Democrats who'd held out on supporting her pledged to vote for her; according to the Washington Post's vote count, this gives her enough support to be elected speaker in January.

Pelosi already served two terms as speaker from 2006 to 2010. This means that, if the new rule is adopted and she's elected speaker again, she'll only be eligible to serve in the upcoming session of Congress and, if she's able to wrangle the support of two-thirds of House Democrats, one more session after that.

The agreement has slightly different ramifications for Pelosi than for the other two top Democrats in the House, Minority Whip Steny Hoyer and Assistant Democratic Leader James Clyburn. Although their positions in leadership would also be subject to term limits under the proposal, they haven't agreed to abide by the rule even if House Democrats don't approve it. Pelosi has made such a pledge, creating the possibility of a situation where she is subject to term limits but Hoyer and Clyburn aren't. Incidentally, Hoyer and Clyburn both oppose term limits.

Although a group of Democrats had made clear before the midterms that they would vote against Pelosi for speaker, their movement faced significant obstacles from the start. Perhaps most importantly, the anti-Pelosi Democrats never put forth an alternative candidate for the position, making it unclear who they intended to vote for other than her. The movement also faced accusations of sexism, as many of the most high-profile Pelosi opponents were white men, and the group didn't articulate a coherent ideological reason for opposing Pelosi's return to the speakership.

All of that is history, though. Seven of the Democratic holdouts said they'll support Pelosi under the new deal, all but assuring that she'll return to the speakership in January.

“We wish to thank Nancy Pelosi for her willingness to work with us to reach this agreement," the seven Democrats said in a statement to Politico. "We are proud that our agreement will make lasting institutional change that will strengthen our caucus and will help develop the next generation of Democratic leaders. We will support and vote for Nancy Pelosi for Speaker of the House in the 116th Congress."