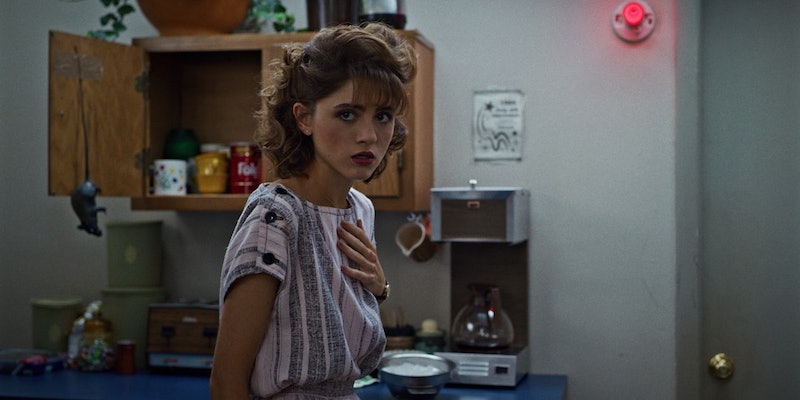 Spoilers ahead for Stranger Things 3. The investigation of rabid rats is the least daunting issue faced by intrepid reporter Nancy Wheeler in the newest season of Stranger Things. The Netflix hit series, which returned for a third season on July 4, reunites fans with dynamic duo Nancy and Jonathan in the midst of their summer jobs at local paper The Hawkins Post. In place of Demogorgons this season, however, Nance must contend with the very real matter of workplace harassment and sexual discrimination by her older male colleagues, whom constantly disparage her ideas and delegate her to menial roles like fetching lunch. According to Natalia Dyer herself, Nancy’s Stranger Things 3 workplace harassment storyline is all too relatable for women.

In an interview with The Hollywood Reporter In Studio, Dyer spoke about the all too familiar storyline endured by women in the workplace. "It's so relatable. And, of course, it's a period show — and to see that and be like, 'Oh yeah, the '80s.' But to recognize that people are obviously still feeling this so much. It's easy for a woman, for me, to go in there. I know what this feels like," Dyer said. "Of course, I do know what this feels like to be looked down upon by older men and underestimated, and I think that's a very relatable thing. So I'm very curious to see how people will react."

Amid the #MeToo climate, Nancy's storyline is certainly still as relevant as ever — and this is something that isn't lost on Dyer. While the interactions with her colleagues are hard to watch, the actor explained that it gave her character a chance to deal with a different kind of conflict. "It was happening then, it's still happening, but I think to see that in a show that's very fun and there's a lot of fun elements and it's a fun thing to watch, I'm glad they threw that in there and gave Nancy this chance to push up against a different kind of conflict," she said. "Because she's grown into a woman who's confident and she knows she's smart, but this is one of the first times that the world is pushing back."

What’s worse? Preparing for combat with a murderous monster from the Upside Down or dealing with harassment and discrimination by obnoxious older men? Unfortunately, our fearless reporter had to deal with both this season — which served as the darkest, most emotional one yet. Following a pep talk with mom Karen (whose effortless waterproof makeup captured the admiration of many), Nancy decides to continue her investigation of the rabid rats and, in turn, learns of the rats' dark connection to the Upside Down. And later, because dealing with ridiculous male colleagues isn't enough, Nancy and Jonathan engage in a terrifying showdown with the Mind Flayer at the hospital.

Basically, Nancy has dealt with her fair share of monsters within the first three seasons. While the series has yet to be officially renewed for a fourth season, Dyer has some ideas on what should (or shouldn’t) come next for her character. "I really like the direction she's going in. I keep being very adamant. I'm like, 'Nancy cannot go to college,'" she told THR. "Nothing against college, but if you went through all of this stuff, how could you go sit through [class]? But who knows? The [Duffer brothers] always pull through and write amazing storylines for everybody, and they think of things you could never think of."

Given the amount of crap Nancy's had to deal with so far, here's to hoping Season 4 finds the Demogorgon slayer relaxing by the Hawkins pool, or, perhaps more realistically, visiting Jonathan⁠ — along with Will, Joyce, and Eleven⁠ — far away from the city after the heartbreaking events that emboldened them to leave Hawkins behind.

More like this
'Stranger Things' Finn Wolfhard Is “Proud” Of Noah Schnapp For Coming Out
By Sophie McEvoy
You Might Want To Rewatch This Key 'On My Block' Scene To Understand 'Freeridge'
By Grace Wehniainen
The 'Freeridge' Cast Shared Their Hopes For A Potential Season 2
By Grace Wehniainen
A 'Terminal List' Sequel & Spinoff Are Reportedly In The Works
By Kadin Burnett and Grace Wehniainen
Get Even More From Bustle — Sign Up For The Newsletter
From hair trends to relationship advice, our daily newsletter has everything you need to sound like a person who’s on TikTok, even if you aren’t.