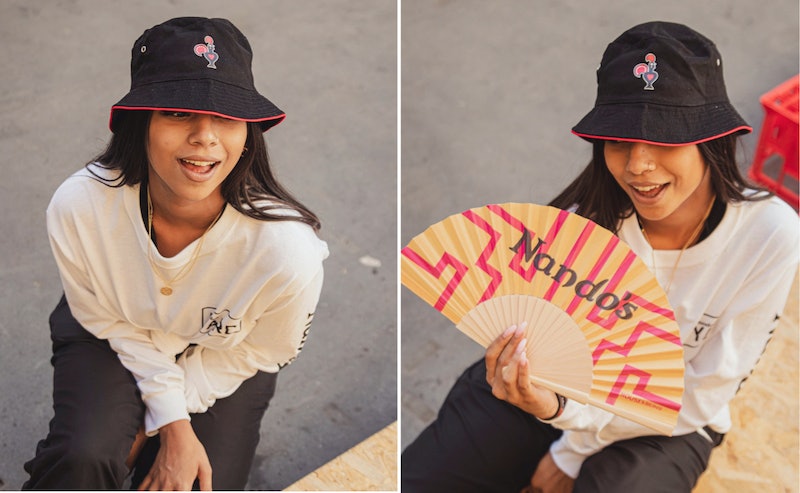 I'm not going to lie to you, I'm a huge Nando's fan. It may be a little basic, but everybody loves a Nando's, and many of us probably can't remember a time when it didn't exist. For the ultra committed fans, you can do things like pick up a rewards card, too. But if you fancy taking your loyalty even further, Nando's is launching a clothing line so you can live your best peri-peri chicken life all year long.

The collection, which is named Nando's Yard, is a street wear focused line that features everything from bucket hats to long sleeved tops. Catering to both men and women, the range starts at £8 and peaks at an affordable £20.

The collection focuses on tops and accessories. There are two t-shirts (one long sleeved and one short sleeve) which are sold in sizes small, medium, large and extra large. The tees are white all over with black printed slogans on the chest and on the arms.

The accessories line includes two tote bags, both in different designs for £8 each. There is also a bucket hat, which is black and red with the Nando's rooster on the front, and that comes in two sizes. Rounding up the collection is a fold out fan in orange and red colours.

A number of the pieces also feature prints designed by London-based artist Reuben Dangoor, who is best known for his portraits of grime artists.

The limited edition clothing collection was released following Nando's Yard, which took place in Shoreditch. The three-week-long summer pop up saw live music, workshops, and of course, a celebration of all things per-peri chicken.

In fact, as well as being able to taste Nando's brunch menu, guests were treated to new food exclusives from the restaurant, including the 'Don Drip Wrap,' a wrap designed by musician Stefflon Don. The beanie wrap features green spinach, chargrilled peppers and a grilled pineapple slice. It is also slathered in an exclusive pineapple and coconut chutney, and finished off with a drizzle of new mango and lime perinaise on top. Delicious.

Nando's has revealed that this is the first time the restaurant brand has offered fans a chance to get their hands on official merch. However, they are not the only food chain restaurant to have created special clothing and merchandise.

In 2017, for example, chicken chain KFC dropped a range of clothes and accessories, which featured everything from a pair of socks covered in chicken drumsticks, to an actually pretty cool (don't judge me) bright yellow sweater with the words 'Fried Chicken USA' emblazoned on the front.

And of course we can't forget the McDonalds clothing line, which also launched in 2017. Personal highlights included the McMuffin sweatshirt, the Big Mac onesie, and the Big Mac and Fries blanket. The range also featured accessories of sorts, including the McNugget dunker, which held your nuggets and dipping sauce. Oh, those were the days...

You can buy Nando's Yard merch from the Nandos website at nandosyard.bigcartel.com.