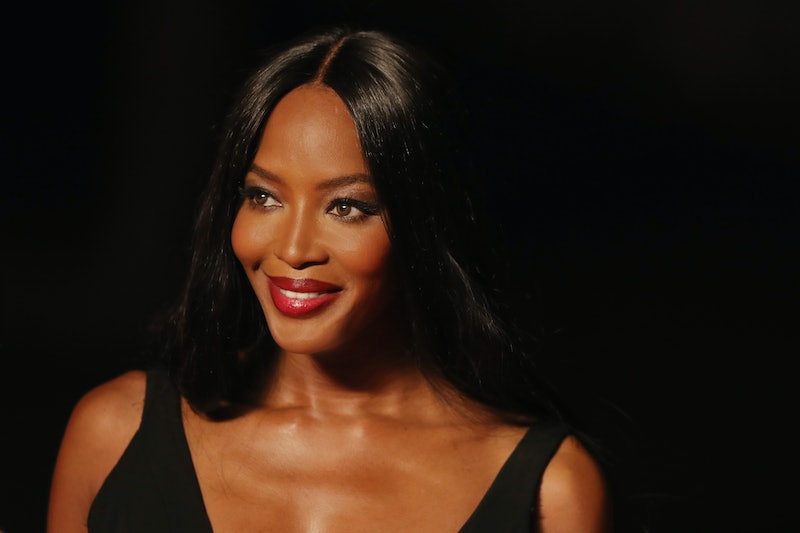 I am obsessed with Naomi Campbell's YouTube channel. From behind-the-scenes videos to candid question and answer sessions, the supermodel gives everything to her 200,000-plus subscribers. But her latest video, filmed at Nice airport, is by far the best. And I'm not the only one to be mesmerised by Naomi Campbell's elaborate plane cleaning ritual.

Numerous people can't get enough of the star's honesty about what really goes on when she steps on board a plane. There's a preconception that celebrities enlist other people to do their dirty work, but Campbell has proven that this is most certainly not the case. Because, despite being worth £45 million, according to the Express, the model was more than happy to get out her Dettol wipes and clean.

The five-minute video begins in the airport where Campbell is wearing a silky pair of Burberry pyjamas and weighing up which snacks to buy for her trip to Doha, Qatar. After getting excited over the chocolate selection (so relatable), she finally settles on a pack of mini Twix bars. "I'm getting this and I don't care," she quips.

As she prepares to leave the duty-free section, Campbell spots the next best thing after chocolate: sweets. Two bags of Haribo are added to her shopping list along with a copy of Vogue, naturally. Although this pre-flight insight is entertaining, it's what happens on the plane that has a caused a stir.

Campbell arrives at her first class seat, showing the camera her "hydration pack" full of face masks and other beauty goodies. But then she searches for something surprising in her Louis Vuitton bag: a pair of gloves. "The best part of the whole thing," according to the model.

One could assume that what she was about to reveal was a pair of high-end moisturising gloves. But no, Campbell brings out a standard pair of see-through plastic gloves and a pack of Dettol wipes and begins to "clean everything you touch" on a plane. This includes the seat, tray table, TV remote, air conditioning buttons, and the wall of the plane next to her seat. "This is what I do on every plane I get on. I do not care what people think of me; it's my health and it makes me feel better," she notes.

Campbell is so thorough, in fact, that the woman sitting behind her jokingly asks: "Can you do my seat next?" The model politely replies: "I don't do them for you, but I'll share it with you."

This deep clean isn't even the end of her flight routine. Next up is a bright pink seat cover, bought at airports she visits and "hand-washed at every hotel" she goes to. In fact, she changes them every week.

Campbell then explains that the cleaning is complete and that the next step would be to delve into her hydration pack and apply a face mask or two. After that, she pops on a surgical-type face mask, covering both her nose and mouth. She says she keeps this on for the entirety of the flight, adding: "No matter what plane you take, private or commercial, as the plane descends, people start coughing and sneezing and the coughing and sneezing makes me... I just can't, so this is my protection."

According to Campbell, her passion for hygiene helps keep her healthy. "As much as I travel, I should get sick so much more with colds and stuff and I'm blessed that I don't," she says.

She has a point. As Time reports, some parts of planes, including the tray table, air vents, and seatbelt buckles, can be particularly dirty. A 2015 Travelmath study actually found that tray tables were dirtier than toilet flush buttons, having more than eight times the amount of bacteria per square inch.

But it's the air that can be particularly problematic. Dr. Richard Dawood described the conditions as "virtually moisture-free" to the Telegraph, explaining how this could make colds and other airborne infections more likely.

You may not be able to control air quality but, as Campbell proves, you may be able to make your seat space a little cleaner.

More like this
Here’s Where The NHS Nurses’ Strike Currently Stands
By Sophie McEvoy
TikTok Has A Genius Old School Hack For Saving Money
By Sophie McEvoy
Ben & Jerry’s New Sundae Flavours Are A Chocoholic’s Dream
By Sophie McEvoy
What The UK Blocking Scotland’s Gender Recognition Bill Means
By Sam Ramsden
Get The Very Best Of Bustle/UK
Sign up for Bustle UK's twice-weekly newsletter, featuring the latest must-watch TV, moving personal stories, and expert advice on the hottest viral buys.