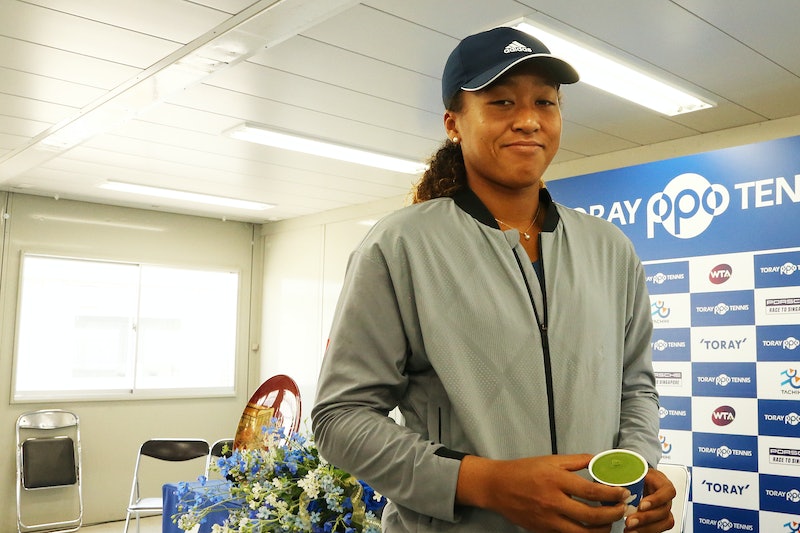 For background: This is basically like that time Jimmy Fallon had Gal Gadot try a Reese's Peanut Butter Cup for the very first time. Green tea ice cream is a dessert staple in Japan. It's as commonplace as, well, Reese's Peanut Butter Cups, so everyone who's ever been to Japan needs to try it at least once. Though it's not clear whether or not Osaka had eaten the treat before, the mention prompted scores of Japanese Twitter users to bombard her with photos of the dessert.

According to CNN, Osaka had originally mentioned her desire to eat green tea ice cream right after her controversial win against Serena Williams at the US Open earlier this year. During the event, says CNN, Williams was struck with a code violation for coaching, causing Williams to have a verbal altercation with chair umpire Carlos Ramos. When it came time to celebrate Osaka's victory, her moment was shadowed by boos from the crowd for what they believed was Ramos' sexist treatment toward Williams, CNN reports.

Apparently their persistence paid off, because Osaka announced on Twitter that everyone can cool their ice cream jets because she’s now experienced the joys of matcha ice cream. Japanese users were pretty excited, with most asking the obvious question: how did she like it?

“And what did you think of it? 😋🍧,” asks Twitter user SylviaKacan.

Twitter user @10nisshiro said, “I'm relieved to hear this news from you. You deserve it👍.”

“Hey, my husband loves 🍵 🍦 too! And I don’t even like it, though I’m Japanese 😂. I’m glad you finally got to eat it 👍,” said Twitter user chocoalatv.]

So far, Osaka hasn’t posted any feedback on her experience, so we’re left with more questions than answers. Like, was this her first time eating matcha ice cream? Did she love it or hate it? Has she had other matcha-flavored snacks, like the oh-so-delicious matcha-flavored KitKats? The world needs to know.

According to WTA Insider, when Osaka mentioned wanting to eat green tea ice cream, she also said she wanted to eat katsu-don or katsu curry, which are deep-fried pork cutlets. So other responses to her matcha ice cream tweet included tweets asking her if katsu-don was next. Whatever Naomi-san chooses to eat, the internet is obviously behind her.