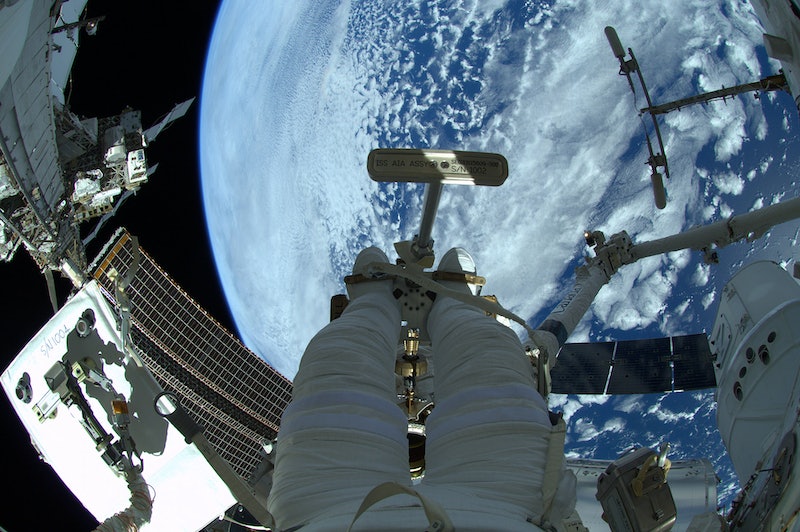 Although female astronauts have been performing outer space missions for decades, some gender barriers haven't yet been broken. But history will be made later this month: NASA confirmed that the first all-woman spacewalk will happen on March 29. It will be conducted by Anne McClain and Christina Koch, though the walk's purpose has not been disclosed.

"As currently scheduled, the March 29 spacewalk will be the first with only women," a NASA spokesperson told CNN on Wednesday. "In addition to the two female spacewalkers, the Lead Flight Director is Mary Lawrence, and Jackie Kagey (also a woman), is the lead EVA (spacewalk) flight controller." Kristen Facciol, a flight controller with the Canadian Space Agency, will provide support on the ground at a NASA center in Houston.

"I just found out that I'll be on console providing support for the FIRST ALL FEMALE SPACEWALK," Facciol tweeted on Friday, "and I can not contain my excitement!!!!"

Women have been walking in space for 34 years. The first to do so was Svetlana Savitskaya, who became the second woman in space in 1980. She became the first to conduct a spacewalk on July 25, 1984, when she and a fellow cosmonaut performed welding experiments on the outside of Soviet space station Salyut 7.

According to Florida Today, spacewalks are generally five to eight hours long. The length of this walk hasn't been disclosed, though it will likely last fewer than seven hours, because that's how long NASA plans to broadcast the event on TV. It's also not yet clear what the walk will entail, though they often involve science experiments, equipment tests, or spacecraft repair.

Koch will take off from Earth on March 14. This spacewalk — Expedition 59 — will be the initial mission of her six-month stint as a flight engineer aboard the International Space Station (ISS). According to WTVD, it will be Koch's first spaceflight, and she's been training for this moment for five years.

"I'm very excited about a lot of the physical science experiments we'll be doing," Koch, a 40-year-old from Jacksonville, North Carolina, told WTVD. "We have experiments in many different arenas of science numbering in the couple hundreds in our mission."

McClain, Koch's partner on the all-female spacewalk, is already in space. The 39-year-old from Spokane, Washington, participated in another historic moment earlier this week when she and other astronauts left the ISS through a hatch and entered a SpaceX Crew Dragon capsule, marking the first time that humans had moved into a Crew Dragon while in space. The ISS hatch had been locked since 2011. The test was an important step in preparing for SpaceX to launch astronauts into space; NASA hasn't sent Americans out since 2011, and is instead outsourcing the task to SpaceX and Boeing.

This is also McClain's first time in space, and getting there has been a lifelong goal. "She just tried to be an astronaut every day of her life," her cousin told The Seattle Times in December.

McClain seems thrilled to finally have achieved her dream, tweeting days after blasting off from Earth, "I am finally where I was born to be."