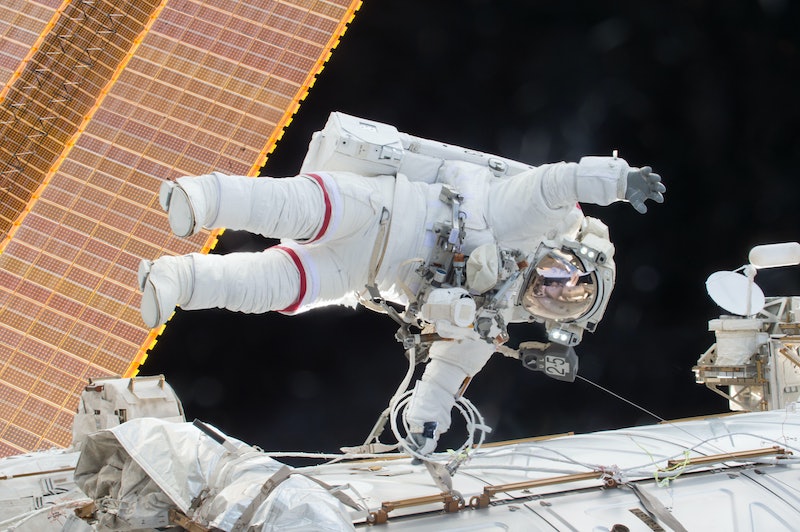 In a March 8 interview for the radio talk show "Science Friday," Jim Bridenstine, the administrator for NASA, said the first person on Mars will likely be a woman. What's more, Bridenstine predicted that the next American astronaut to walk on the moon will also be a woman. He didn't provide an exact date for either of these plans, but did offer up an exciting timeline for another woman-focused event: the first all-woman spacewalk will be taking place later this month.

Via The Huffington Post, Bridenstine said during the show, “The first person on Mars is likely to be a woman." He added,

These are great days. We have the first all-female spacewalk happening this month at the end of March, which is of course, National Women’s Month ... So NASA is committed to making sure that we have a broad and diverse set of talent.

Bridenstine did not provide specific info as to how NASA will decide who to send on this mission. However, it might be a harder decision than you think, given how many more women are becoming astronauts nowadays than there were in 1978, when NASA first accepted women. Per NASA, 34 percent of active astronauts are now women.

What's more, NASA reports that this year marks the first year in the institution's history that the astronaut candidate class is half men, half women. The organization is also working to increase the amount of people of color who are in the ranks; currently, African American, Asian, Pacific Islander, Hispanic, and other "multi-racial astronauts" make up 24 percent of active astronauts for NASA, per the organization.

Via The Huffington Post, the first all-female spacewalk will take place on March 29, and will include astronauts Christina Koch and Anne McClain. The lead spacewalk officer will be Jackie Kagey, the publication reports. In a statement acquired by The Huffington Post, NASA spokeswoman Kathryn Hambleton said, “The March 29 spacewalk will be the first with only women... [but] assignments and schedules could always change.”

The goal of the spacewalk is to work on upgrades to the International Space Station, according to Space.com. In a televised call with Mike Pence on March 6, McClain said,

It might surprise some to know that it wasn't planned for the spacewalk to be all-women, or for it to take place during Women's History Month. To Space.com, NASA's Stephanie Schierholz said, "It really is the luck of the draw," explaining that it was random chance that only women were selected for the walk. Schierholz added, "We feel lucky that it [the all-female spacewalk] just sort of happened to be in Women's History Month."

The tentative schedule marks March 29 as the day the women will step "outside" to perform maintenance for approximately seven hours, per NASA's website. However, Space.com notes that the date is subject to change.