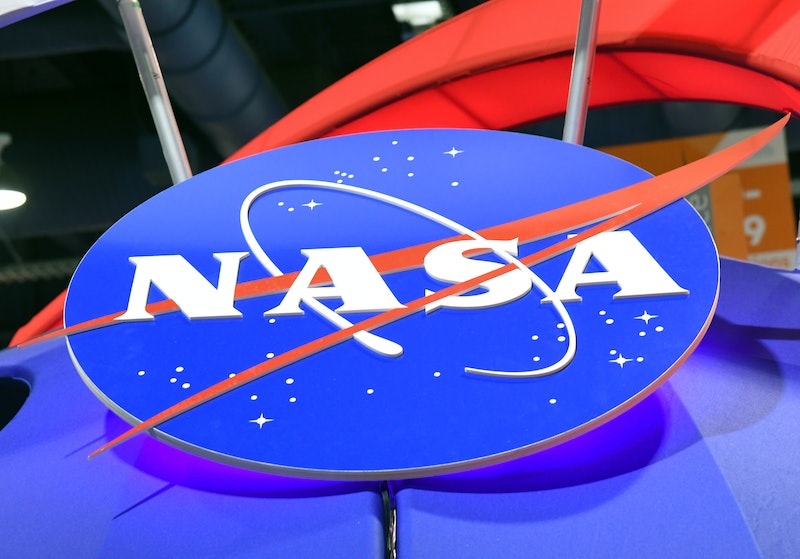 America's longest government shutdown is creating some alarming conditions for workers across the country, including, apparently, some NASA employees. As a result of the government shutdown, The Houston Chronicle reported on Thursday that essential NASA workers were asked if they could help clean the Johnson Space Center's bathrooms as custodians are on leave.

Blome tweeted photos of two notes, one of which mentioned that custodial services were suspended, including "desk-side trash pickup and bathroom cleaning." The message advised workers to "bring your personal desk-side trash to the brown bin (across the men's bathroom) so we don't attract ants or rodents." On the second note, workers were asked to volunteer to tidy up the bathrooms, including cleaning the toilets, "once per week until the shutdown ends."

The government shutdown began at midnight on Dec. 22, 2018, and President Donald Trump has refused to budge on his demand for $5.7 billion in a federal expense bill to construct his U.S.-Mexico border wall. Since then, hundreds of thousands of federal workers across America have missed two consecutive paychecks, resorted to crowdsourcing donations, and in some cases, have been moonlighting on the side and rationing medication just to get by.

The essential NASA workers are in a tough situation, according to The Houston Chronicle. In addition to being asked to clean the Johnson Space Center's bathrooms, these employees are reportedly not being paid at the moment due to the government shutdown. According to the publication, 94 percent of the Johnson Space Center's staff has been furloughed since the shutdown first began. The remaining unpaid workers are presumably the center's skeletal crew.

Things have gotten desperate for custodians as well, according to Byron Williams, who represents Houston for the International Association of Machinists and Aerospace Workers. Twenty out of 50 of the custodial service workers Williams represents are currently maintaining the Johnson Space Center, according to The Houston Chronicle.

Federally-funded postdoctoral research, along with that happening at the Johnson Space Center, has taken a hit due to the shutdown, too. According to The New York Times, scholars who require governmental funding to carry out their studies, don't have the necessary funds to do their jobs.

The International Journal of Science reported that scientists, including those who work on space research, have been worried about how or even when they will continue their time-sensitive work. In simple terms, many of these researchers can't access their data, field more reports, or conclude ongoing assignments.

Amid all of this, it seems like these workers' troubles are only increasing with unhygienic conditions in their workplaces. But they're not alone. With their staff on leave, many employees at the National Parks have complained about how garbage — and human waste — have inundated their areas.