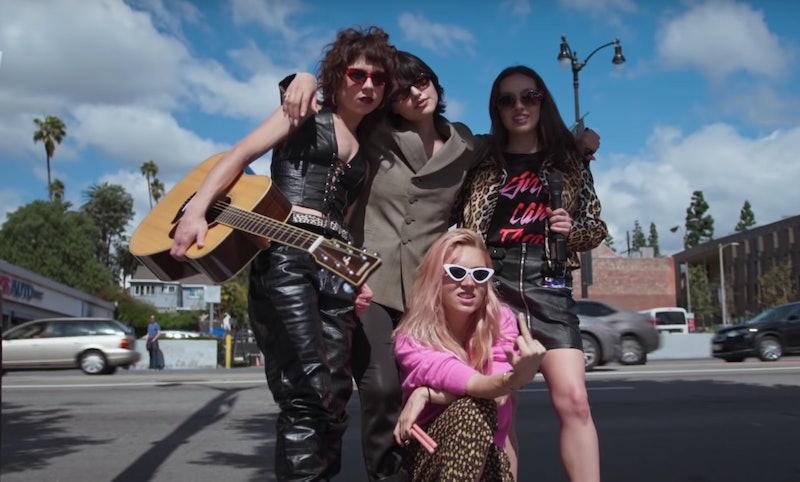 Though their new Netflix show I'm with the Band is only debuting Friday, Nasty Cherry's music is already online — and they've released several music videos. The group of four — including Gabbriette Bechtel, Chloe Chaidez, Georgia Somary, and Debbie Knox-Hewson — has been working steadily behind the scenes for several months. Now, I'm with the Band will chronicle that work, beginning with their spontaneous formation courtesy of Charli XCX.

"Charli DM-ed me asking me to be in the band and I honestly didn't have any details of what was going on around it, I just said yes," Bechtel told NME in October, explaining that the "1999" singer had asked for a video of her singing. "I was like — 'I don't f*cking sing! And Charli was like, 'That's even better.'"

Before joining Nasty Cherry, Bechtel was a a photographer and model; Somary was a movie set designer who learned the bass specifically to be in the group; Knox-Hewson had drummed for Charli in the past; and Chaidez still leads her own alt-rock band, Kitten. They all met via Skype and then moved into a house together.

"We were all naked by the first night, just running around unpacking and screaming," Bechtel told NME. Added Chaidez: "XCX gave us the rundown, which was basically, 'We don't know what we're doing, but we're going to make songs.'"

And that's exactly what they did. Nasty Cherry currently has four tracks on Spotify — the first of which, "Win," was released in March. In a separate Q&A with NME, Somary described their sound as "driving fast late at night in the rain listening to New Order and the Runaways with your date," while Charlie wrote on Instagram that it's reminiscent of her first album, True Romance.

It's also clear that a band of this caliber is something Charli has been planning for a while. "This idea has been in my brain for probably three years," she wrote during a Twitter AMA. "I just wanted to work with women with a punk ethos — and Nasty Cherry have that!!! they're like the runaways in 2019 with Instagram."

But while Charli may have brought Nasty Cherry together, she's not that involved in their everyday creative process. In the same Twitter AMA, she explained that she only helped write the songs "Live Forever" and "Win." "[T]he whole process started with us all in the room coming up with the ideas together," she tweeted. "They write their own songs. They're brilliant writers."

The group has also made a name for themselves by sharing funny, self-aggrandizing Instagram posts — their very first being a video of a champagne flute on Somary's butt captioned, "HI. WE'RE NASTY CHERRY AND WE'RE THE BEST BAND OF 2019."

"I think based off our first hello to the world as a band being a flute of champagne on Georgia's ass, I think we started it off being completely ourselves," Bechtel told NME.

And they've continued to do so. One of their posts calls I'm with the Band "the world's greatest TV show," while another says, "Working on writing Grammy award winning songs because we know we've already got an Emmy award winning tv show out November 15th."

When their debut EP comes out later this month, expect more of the same unabashed confidence.