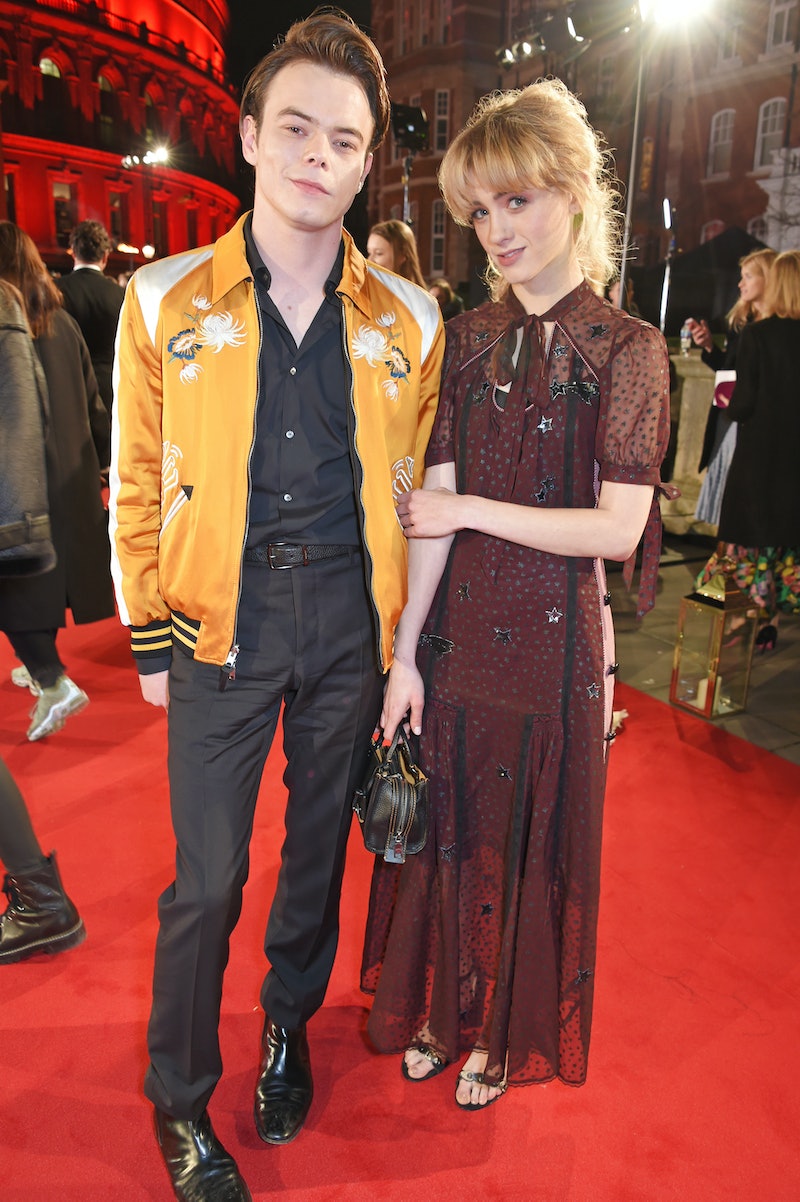 Stranger Things fans will definitely be excited about this news. Two of the series' stars Natalia Dyer and Charlie Heaton have made their relationship red carpet official, as Marie Claire reports. The actors walked the red carpet at the Fashion Awards in London on Monday, December 4, and the appearance finally puts all of those romance rumors concerning the pair to rest.

Dyer and Heaton donned their most fashionable attire for the awards show, and they posed for photos together. But, the most surprising part about their red carpet appearance was that it marked their first one as a couple. The two have been plagued with romance rumors for the majority of this year, but haven't confirmed anything regarding their relationship status.

The actors were first linked back in January 2017 when they were seen at the airport together, according to an Us Weekly report. In a video from the Daily Mail, they were even asked whether they were dating when they were spotted together at LAX, and neither Dyer nor Heaton confirmed or denied the rumor. Heaton did say that "People like to read into certain things" when the two were asked about what fans would think of the actors hanging out together. Ever since they were spotted traveling, the romance rumors couldn't help follow whenever they were photographed together.

The Stranger Things actors continued the romance rumors when they attended the MTV Movie & TV Awards in May 2017. While the two didn't walk the red carpet together, they did pose for photos together inside the event, according to InStyle. Still, this wasn't a confirmation that they were in a relationship, even though they may have looked comfortable together while they posed for pics.

Dyer and Heaton were once again spotted together when they were in New York City in October. According to PopSugar, the they were holding hands as they took a stroll around the city.

And, before the couple made their red carpet debut, they went to a Burberry event in London together on December 2, according to Us Weekly.

In the past, Heaton and Dyer have often posed on the red carpet with their Stranger Things co-stars; Joe Keery in particular. In a January Instagram post from Heaton, he posted that he, Dyer, and Keery attended the Golden Globes together. The trio also attended the Emmys together this year.

The couple also posed with their Stranger Things co-stars on the SAG Awards red carpet in January. Both of them attended the event, albeit separately, and appeared onstage when the cast went up to accept their award for Outstanding Performance by an Ensemble in a Drama Series.

But, the two didn't actually walk a red carpet together until they attended the Fashion Awards. Now that the pair has appeared together on a red carpet and that seemingly confirms the fact that the two really are in a relationship.

Dyer and Heaton's red carpet debut was great news for everyone who was rooting for Nancy and Jonathan to get together IRL. And now, all of those rumors wondering whether the two are in a relationship, can finally be put to rest.

More like this
Sadie Sink Almost Wasn’t Cast On 'Stranger Things'
By Frances Stewart
'Stranger Things' Star Jamie Campbell Bower Reflects On Being Sober For Over 7 Years
By Radhika Menon
Who Is Camila Cabello Dating? She's Getting Cozy With Lox Club CEO Austin Kevitch
By Radhika Menon
Kim Kardashian & Pete Davidson’s Relationship Timeline From Start To Finish
By Jordyn Tilchen and Bustle Editors
Get Even More From Bustle — Sign Up For The Newsletter