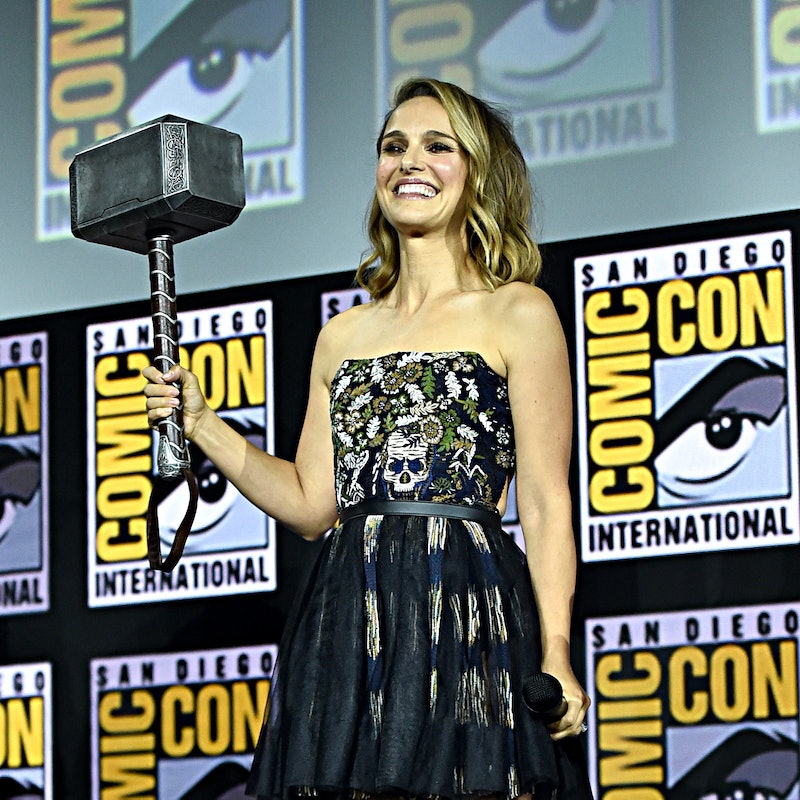 Not all heroes wear capes, but Natalie Portman does. In the wake of one famed director's recent controversial comments concerning the big-screen blockbusters associated with the MCU, Natalie Portman defended Marvel movies from Martin Scorsese's criticism during an interview with The Hollywood Reporter on Oct. 19. The actor is set to reprise her role as Jane Foster in the franchise's upcoming Thor: Love & Thunder, and she's just one of the many industry veterans who has addressed Scorsese's statement deeming the films "not cinema."

When asked for her opinion on the director's frank displeasure with the genre, Portman told THR that she believes "there's room for all types of cinema," adding, "there's not one way to make art." She then went on to explain that she thinks the films have been so successful "because they're really entertaining and people desire entertainment ... after dealing with their hardships in real life."

Scorsese sat down with Empire earlier this month, as reported by Vanity Fair, and garnered considerable backlash after seemingly invalidating MCU films altogether. While he admitted that he doesn't actually watch the action-packed superhero chronicles, he compared them to "theme parks," in that they aren't "the cinema of human beings trying to convey emotional, psychological experiences to another human being."

Despite the fact that Scorsese's work in film has long-been widely renowned, his opinions about the MCU don't exactly line-up with those of audiences — or those of the Academy of Motion Picture Arts and Sciences, aka, the organization in charge of the Academy Awards. Marvel's Black Panther made history earlier this year by becoming the first superhero and Marvel movie to be nominated for Best Picture. Not only that, but the film helped the genre earn even more legitimacy by winning the Oscars for Best Original Score, Best Costume Design, and Best Production Design in 2019. Prior to that, Marvel Studios had only acquired 10 nominations total over the course of their 10 year history, according to CNBC, and had yet to win in any category.

Be that as it may, Godfather director Francis Ford Coppola spoke out in support of Scorsese's claims, and told Agence France-Presse news agency and France 24 (as per THR) that Scorsese was right in saying that Marvel films "are not cinema." Coppola continued, claiming that the MCU wasn't cinema because audiences don't gain "some enlightenment, some knowledge, [or] some inspiration" by watching them. "Martin was kind when he said it's not cinema," Coppola further added. "He didn't say it's despicable, which I just say it is."

Entertainment is, for the most part, wholly subjective. However, Portman isn't the only actor in the MCU who has voiced their disagreement over Coppola and Scorsese's sentiments about the genre. Karen Gillan, who plays Nebula in the Guardians of the Galaxy series, told THR earlier this month that Marvel movies are "absolutely" cinema, seeing as how "Cinema is storytelling with visuals." Meanwhile, Samuel L. Jackson, who plays agent Nick Fury, told Variety that Scorsese's comments were akin to "saying Bugs Bunny ain’t funny." The criticism didn't seem to bother him too much, however. "Films are films ... Everybody’s got an opinion," he added. "Ain’t going to stop nobody from making movies."