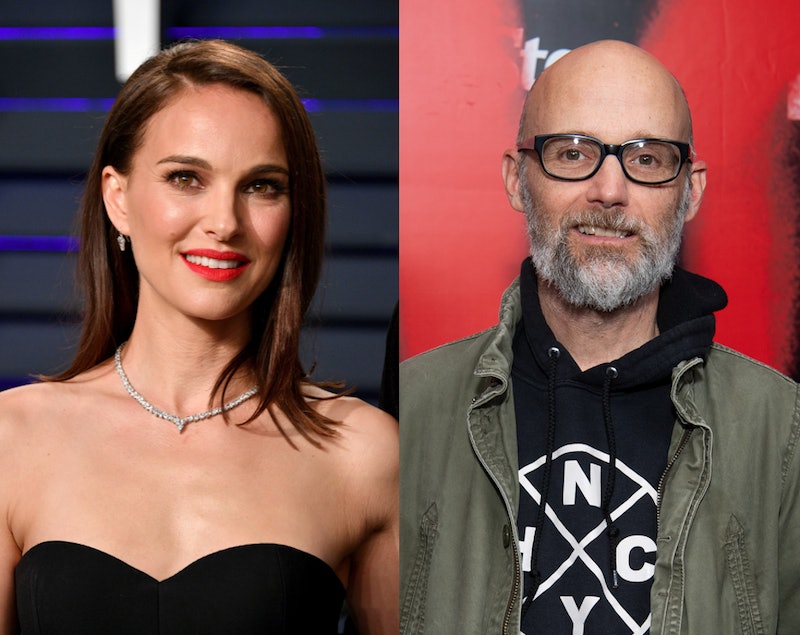 Scroll through Twitter, and it's likely you'll see a lot of tweets about whether Natalie Portman and Moby dated. It's all because of Moby's new memoir, in which he claims he dated Portman back in 1999 when she was barely 18. (He was 33.) The problem is, in an interview with Harper's Bazaar UK published Wednesday, May 23, Portman refuted Moby's dating claims and called his behavior "creepy" — only to have him double-down on his claim in an Instagram post. It's no surprise, a lot of people found this exchange funny. The idea that Moby would try so hard to convince the world that he dated Portman, even going as far to offer "photographic evidence," is fairly ridiculous. But, it's also inspiring a more serious dialogue about consent and power dynamics in relationships — one that we need to have.

In Moby's recently released book, Then It Fell Apart, he wrote that he first met a 20-year-old Portman backstage at one of his shows, where he claims she flirted with her. According to an excerpt, published last month in the Sunday Times, per NBC News, Moby wrote,

“I was a bald binge drinker who lived in an apartment that smelled like mildew and old bricks and Natalie Portman was a beautiful movie star. But here she was in my dressing room, flirting with me.”

In the memoir, he claimed that he "tried to be her boyfriend," but she ultimately broke it off after meeting someone else. The problem is, Portman has now said this never happened. When asked about the supposed relationship in her recent interview with Harper's Bazaar UK, Portman denied any romantic involvement with the singer, saying,

"I was surprised to hear that he characterized the very short time that I knew him as dating because my recollection is a much older man being creepy with me when I just had graduated high school."

She also pointed out that he seemed to misstate her age at the time of their meeting, adding, "He said I was 20; I definitely wasn’t. I was a teenager. I had just turned 18."

Portman then went on to classify their relationship as friendly, until it was clear that's not what he was interested in. "I was a fan and went to one of his shows when I had just graduated,” she explained. “When we met after the show, he said, ‘let’s be friends.’ He was on tour and I was working, shooting a film, so we only hung out a handful of times before I realized that this was an older man who was interested in me in a way that felt inappropriate.”

Portman also claimed to Harper's Bazaar UK that his publisher never reached out to her to fact check his account of their relationship, saying, "It almost feels deliberate. That he used this story to sell his book was very disturbing to me. It wasn’t the case."

It's no surprise that Portman's "Moby is a creep" comments went viral, but Moby's subsequent response made the exchange even more awkward. Following Portman's remarks, Moby posted an Instagram photo of him and Portman together in which he is shirtless. In the caption, he said her remarks "confused me, as we did, in fact, date." Moby claimed that he "can’t figure out why she would actively misrepresent the truth about our (albeit brief) involvement," but that his story is "accurate, with lots of corroborating photo evidence, etc."

To further make his point, Moby added a P.S. to this Instagram: "I completely respect Natalie’s possible regret in dating me (to be fair, I would probably regret dating me, too), but it doesn’t alter the actual facts of our brief romantic history." (Bustle reached out to Portman's reps for comment on the claims in Moby's Instagram post.)

The thing is, Moby might have thought he was dating Portman, but if she says they didn't, it's hard to know what really happened. In her interview with Harper's Bazaar UK, the actor described a powerful older man preying on a vulnerable younger woman. She claimed she was forced to end a friendship because he didn't understand or chose to ignore her boundaries, something women are talking more openly about in this Time's Up and #MeToo era.

But as many on Twitter pointed out, based on his Instagram response, Moby seems to be choosing to ignore Portman's account entirely, which is behavior plenty of women recognized. "Men never understand when our experience of their inappropriate behavior doesn't match their memory of how they would have liked things to go," WNYC's Rebecca Carroll tweeted.

In contrast, Moby's account insisted that she was the one with all the power. He claimed Portman was in charge: She flirted with him, a "bald binge drinker," and she broke up with him. But, the fact that he was so much older than her gave him more power in this situation, whether he wants to admit that or not.

The musician seems so busy trying to prove he's not lying about dating her, he's missing just how — to steal Portman's word — creepy this whole thing actually seems. "The emerging narrative re: Moby today that '20 year old' — *COUGH* 18 — 'women actually have a LOT of power over heterosexual men even if they are decades older' can all be filed under Telling On Yourself," Vulture's Jordan Crucchiola tweeted.

In 2019, Moby's anecdote about dating an 18-year-old (or 20, as he wrote in his book) Portman when he was 33 needs to be unpacked a little more. There is a larger, more important conversation this situation relates to, and that's how power dynamics between two people can deeply color a relationship. As his account stands, it reads like an older man bragging about being with a younger attractive women, instead of delving further and having a more honest conversation with himself and his fans.

Moby has yet to comment about the greater context of these conflicting reports, but he did respond again on Thursday in two more Instagram posts. In the first, he called out "trolls," who he wrote are "hating a stranger based on egregiously limited information." In his second post, the singer reaffirmed his account of their relationship, writing in the caption, "It hurts to be lied about, especially as I've always respected her, and I thought we were friends."

The singer also claimed he was "receiving anonymous threats of violence from her fans." Finally, in another post, he seemed to declare a break from social media, writing, "So, attack me, slander me, lie about me, in the meantime I'll be trying to save animals and help stop humans from destroying the only home we have. Bye."

But, for many there is more than enough information here to show that this conversation surrounding age and power in dating is one that needs to continue if there's to be any change in relationship dynamics.

More like this
Selena Gomez Is Fine Being Single, But She Still Manifested Romance On 'SNL'
By Martha Sorren, Jake Viswanath and Jack Irvin
Justin & Hailey Bieber's Bond Is "Unbreakable" Amid His Ramsay Hunt Diagnosis
By Bustle Editors
Why Sara Pascoe's Husband Is Familiar To Comedy Fans
By Alice Broster
Twitter Can’t Move Past *That* Secret Kiss On 'Love Island'
By Frances Stewart
Get Even More From Bustle — Sign Up For The Newsletter