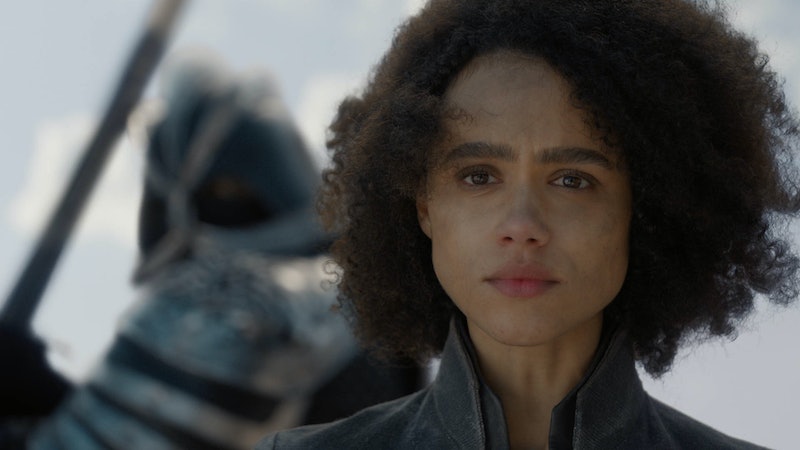 This past week's Game of Thrones was met with a pretty harsh response. There was a lot of criticism to go around, but at the top of the list of complaints was Missandei's execution. She was a character that wasn't always in the thick of things, but she was still important to the story, Daenerys, and of course her fans. That's why actor Nathalie Emmanuel's goodbye to Missandei on Instagram was particularly bittersweet, but it was also a lovely way for the world to kind of come to terms with her character's death as well.

Just a couple of days after the episode aired — enough time to let the dust settle and the tears dry — Emmanuel posted several pictures and a video to Instagram, accompanied by a lengthy goodbye letter to the show and her character. "It’s been one of my greatest joys playing Missandei of Naath," she wrote. "The quiet and kind translator. A brilliant woman who overcame so much suffering and found herself, her voice... and her one and only love. She represented so much for me, personally, that I have no choice but to carry the things she has taught me into my life going forward."

Missandei's story started in Naath, as Emmanuel wrote, which is where she was born. But from the time she was a young girl, she was sold into slavery to Kraznys mo Nakloz of Astapor, in the main function of interpreter. Daenerys freed her, but Missandei decides to stay with the Dragon Queen, which is where the two became quite close.

Because of that bond on the show, Emmanuel decided to give a special shoutout to actor Emilia Clark in her post. "GIRL! I love you... SO much. I’ve loved playing your BFF for the past 7 years," she wrote. "Thank you for being such a wonderful person in my life and a source of light and laughter. The Bad Ass Boss Lady Warrior Goddess club will live on forever 😂🙌🏽"

And of course, how could Emmanuel say goodbye to Missandei without also saying a farewell to her on screen love Grey Worm (aka Jacob Anderson). "Jacoooob! I literally cannot tell you what sharing the screen with you has meant to me," she wrote. "I found performances I didn’t know I had inside me, simply because you gave me so much to work against. Playing Missandei and Grey Worm’s journey has been so special. I couldn’t have asked for a more generous and supportive co-star... negotiating so much but always having each other’s back." Their love story was probably one of the purest on the whole show, which of course meant it wasn't safe. But that doesn't mean it hurts any less.

Emmanuel also posted a video of the two of them goofing around on set to the song, "My Boo" by Ghost Town DJs, which is also known as the Running Man Challenge song. Anderson also reposted the video on Twitter, writing, "I know it hurts. But Somewhere in the multiverse 👑🌞🌴." These emojis reference the happy ending Missandei and Grey Worm could have had, living on a beach somewhere far away form all this war and death. They also mirror the final line of Emmanuel's post: "I know last night was pretty intense for some of you so I invite you to participate in my fantasy where I like to think that, right now.... Missandei is sipping a rum on a beach somewhere in sky 😂... 🍹🌴."

Missandei was just a good soul, and a great character. It's hard to say goodbye, but hopefully fans can take comfort in knowing that somewhere in the multiverse, she got her happy ending.