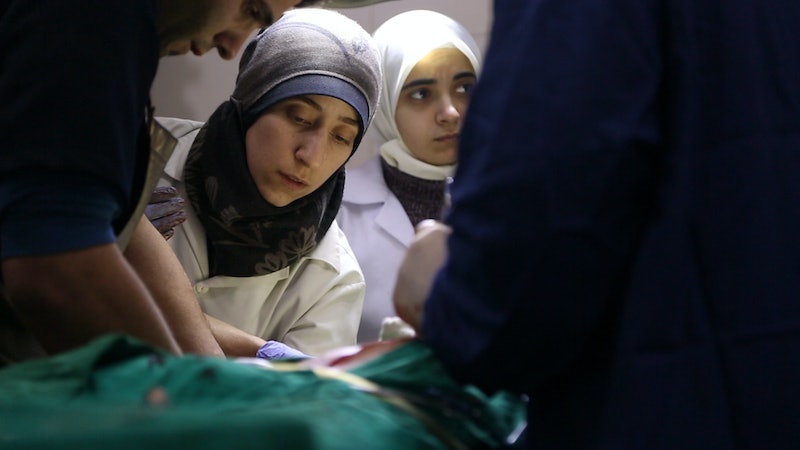 The ongoing war in Syria has destroyed civilian life, cutting off access to food and supplies and turning neighborhoods into bombed-out wastelands. The region of Eastern Ghouta outside the Syrian capital of Damascus has been especially hard hit, with constant indiscriminate bombing making every step outside life-threatening.

Hope and safety are hard to come by, but the best chance of finding both lies underground, in a subterranean hospital nicknamed The Cave. National Geographic's documentary of the same name follows managing physician Dr. Amani Ballour and her two colleagues Samaher and Dr. Alaa as they contend not only with diminishing supplies and a growing number of patients, but with bombings, chemical attacks, and hostility from a patriarchal society that doesn't believe young women capable of doing their jobs.

Their jobs are vital ones, and sound — be it the muffled explosions above ground or the piercing cries of a patient on a gurney in another room — was extremely important in portraying the experience of working and being treated in The Cave as viscerally and accurately as possible. Sound designer Peter Albrechtsen worked closely with director Feras Fayyad (Last Men in Aleppo) to ensure viewers would feel as if they were right alongside Dr. Amani and her team as they worked in unimaginable conditions.

"[Fayyad] was so focused on sound being a very big part of the film," Albrechtsen tells Bustle. "It was really important to him to make The Cave very emotionally realistic, like we should feel how it was to be there."

That wasn't easy, as the field recordings were rough. The Cave is an active hospital with patients, doctors, and crew constantly moving through narrow halls and underground rooms — not exactly the best place to record audio. Blackouts and lack of equipment only made it even more challenging to give a clear sonic sense of the surface violence, while keeping track of events deep underground.

"When you heard the original recordings, it was hard to make out what they were saying," Albrechtsen says. "To make all that feel real, we had to build sounds, lots of layers of all these different elements — of the planes, of the bombings, of all the hospital equipment, of the stretchers rolling down the hallways."

The film follows the concerns of each particular woman. Dr. Amani is in charge of managing dwindling resources and ensuring everyone's safety. Samaher, nicknamed Sama, can be fun and charismatic, but she's extremely sensitive and suffers from trauma. Dr. Alaa was friends with Dr. Amani, and both chose to give up their studies and help at The Cave as others fled for their lives. Though they're confined to dimly lit rooms underground, the women throw birthday parties, put on makeup, cook, and visit families, refusing to let the ongoing war envelop every element of their lives.

Every day is a monumental struggle toward normalcy for the women. Watching hundreds of hours of raw footage from a war zone was also difficult on the editors. "It's so horrifying what's going on," Albrechtsen says. "I have two small kids, so just watching all this footage of children, it was really horrifying."

Working on sharing the stories of the women working in The Cave helped a great deal. "At some point when you work on a film, you start getting so focused on getting all the details right and just doing the hard work of everything," Albrechtsen adds. "Then you're so focused on creating a kind of cinematic vision... so of course it's also emotional, but you kind of need to do the work, in a way."

It helped that the story being told was one of hope amid horror. "These doctors from the hospital, it's so powerful what they're doing," Albrechtsen says. When he met Dr. Amani in Istanbul to record some voice recordings, he was struck by how her voice contrasted with the chaos and terror of her workplace. "One of the important qualities [of] the film is that in places, it's very loud, very noisy, and has some really evil sounds," he says. "But there are also places where it's very fragile, very minimal, and these places with her voice — her very gentle, whispery voice — [were] such an important element to the whole sound design of the film. So it was very moving to meet her."

As a beacon of hope amid uncertainty and terror, Dr. Amani is one side of The Cave's compelling portrait of good and evil. "I feel like the film is showing the best of humanity and the very worst of humanity," Albrechtsen says, "and I hope the sound supports both those qualities."