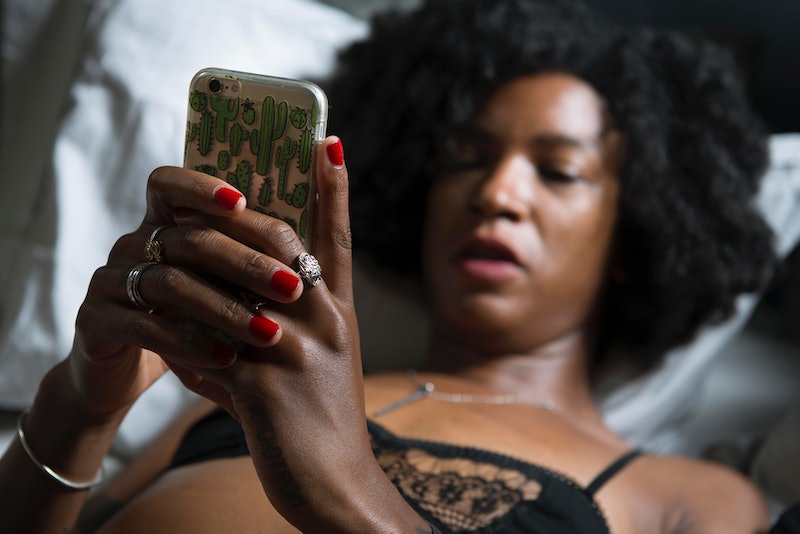 While using birth control greatly reduces your chances of becoming pregnant, no method is foolproof. One app that was certified in Europe for use as a birth control method has come under fire after 37 women allegedly became pregnant unintentionally while using it. “Natural Cycles” birth control app has now been reported to Swedish authorities, according to Swedish news outlet SVT. Out of 668 women who sought abortions at Södersjukhuset hospital in Stockholm from September 2017 until the end of the year, almost 40 women reported using the app as their primary form of birth control.

If you're not familiar with the app, which is not approved in the U.S. by the FDA as an effective method for avoiding unintentional pregnancy, those who use the app are required to enter their temperature every morning. As the app gets to know your cycle, it notifies you each day if it's a green day, or safe for sex with the lowest risk of pregnancy, or a red day, which means you may be more likely to get pregnant and should use an extra form of protection against pregnancy, such as a condom. This is the same principle behind the "fertility awareness" or "rhythm" method of contraception, which works by understanding where you're at in your cycle, so that you don't have sex on a day where you're ovulating or close to ovulating (in Natural Cycles' terms, a "red day.") The app does not protect against STIs, and can only be used for "fertility monitoring" outside of Europe, according to Natural Cycles' website.

While extensive studies concluded that the app is about as effective as the pill when used correctly, Natural Cycles told SVT in a written statement, "No contraception is 100 [percent] effective and unwanted pregnancies are unfortunately a risk of all contraceptives. Natural Cycles has a Pearl Index of 7, which means an efficiency of 93 [percent]." That being said, a lot of things can lower the effectiveness of all forms of birth control, and Natural Cycles is no different.

While oral contraception is highly effective, things like certain antibiotics, missing or skipping a dose, or not taking the pill at the same time every day can significantly lower its effectiveness, according to Planned Parenthood. While Natural Cycles is the only digital form of non-hormonal birth control certified for use as a contraceptive method, it has not received the same approval in the U.S. And similar to other forms of birth control, there are variables that can affect how reliable a birth-control app is. For example, not following the guidelines exactly can increase the chances of getting pregnant while using the app.

In order to fall into the 93 percent effective zone, Natural Cycles advises: "Ensure that you are measuring correctly by using a certified two decimal basal thermometer, just after you wake up, before getting out of bed and underneath your tongue," the company explained on its website. "Tap ‘Skip today’ or ‘Deviating temp’ in the add data view when you feel sick, hungover or have slept two hours more or less than usual. Use protection on red days to effectively prevent a pregnancy. The risk of getting pregnant is significantly higher on these days as you are very likely to be fertile." Basically, you have to be super committed to using the app correctly to ensure that the variables mentioned above don't give you an inaccurate reading, which isn't always feasible.

Additionally, only people who have a regular menstrual cycle should use the app. So, if your periods are irregular, then the app may not be effective for you. It's not clear if the women who reported becoming pregnant while using Natural Cycles followed the guidelines put forth by the app. However, lack of knowledge about how important it is to adhere to the app's strict guidelines could increase the chance of unwanted pregnancies.

"It’s a new method and we are seeing a number of unwanted pregnancies, and therefore we are now reporting this to the Medical Products Agency," Carina Montin, a midwife at Södersjukhuset (SÖS) told Siren, which first reported the news, according to Business Insider.

If you want to use an app to track your cycle, Planned Parenthood created the Spot On Period Tracker, that works a bit differently than Natural Cycles. Spot On basically acts as your digital partner to ensure your chosen form of birth control is as effective as it can possibly be. It works with your birth control, but does not replace it.

"If you’re on a type of birth control that affects your menstrual cycle, Spot On can help you: Understand the effect(s) your birth control has on your cycle; know what to do if you have a birth control mishap (e.g., miss a pill, put on a patch late); remind you to take a pill, change a patch, get a shot, change a ring — you name it," Planned Parenthood explained on its website.

While app-only method Natural Cycles reported on its website that 6.8 percent of people out of 100 may get pregnant while using the app, this is about the same number as those who use the pill as directed. One thing that keeps birth control options like the pill and the app from being 99 percent effective is something called "typical use," which the Association of Reproductive Health Professionals described as irregular use of contraception.

"Nearly two-fifths of [people] who rely on the pill use it inconsistently, reporting missing at least one pill during the previous three months." For those who fall under typical use, the pill is not 99 percent effective. It's important to be aware of these variables when choosing any contraceptive. If you know that you're not going to remember to take your pill as directed, or you can't commit to using an app consistently, then it might be best to choose another form of birth control. You can even take a quiz on the Planned Parenthood website to see which birth-control method best fits your lifestyle. Because, as in most situations, knowledge is power. #TheMoreYouKnow