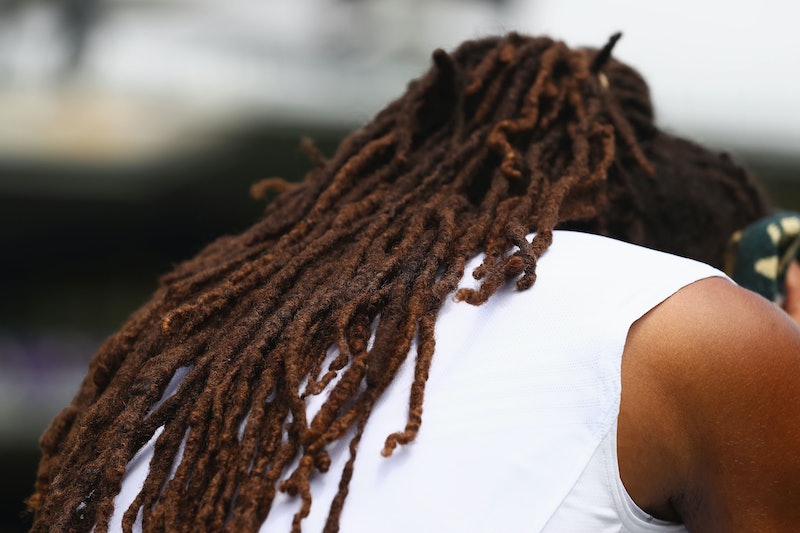 I first permed my hair when I was in my teens. At the time, I was under the impression that it would be more manageable this way. But in my early 20s, I made the decision to go natural, and I never looked back.

A few years into my journey, I decided to get locs, which I wore for the next 15-plus years thereafter — a style I truly loved.

So in 2016, when a federal appeals court ruled that Catastrophe Management Solutions, an Alabama-based company, had legal grounds to renounce Chastity Jones' offer of employment — effectively saying that banning locs in the workplace was not considered to be racial discrimination — I was furious. Not only as someone who wore this style for over a decade, also because locs hold so much significance in the black community.

But on Feb. 18 of this year, New York City — a place I spent many a summer while growing up, and called home for three years before moving to Toronto — took a step in the right direction when its Commission on Human Rights announced that targeting black people because of their natural hair or hairstyle while at work, school, or in public would now legally be considered as racial discrimination.

The commission also outlined specific styles that would be protected under these new guidelines. "For black people, this includes the right to maintain natural hair, treated or untreated hairstyles such as locs, cornrows, twists, braids, Bantu knots, fades, Afros, and/or the right to keep hair in an uncut or untrimmed state," the document read. In addition, defendants who are proven to be in violation of these new rules can face penalties up to $250,000, according to The New York Times.

As a child, I remember being absolutely fascinated with locs. I thought they were a spectacular beauty. The way they could be shaped into so many different styles or dyed an array of colors always had me in awe. In my eyes, locs were always one of the most regal natural hairstyles.

While the look was mostly popularized for the mainstream by reggae legend Bob Marley, as Rastafarianism became more widely known in the '60s and '70s, it was seeing women like Lauryn Hill proudly flaunting locs in the ‘90s that made me realize how important it was for me to wear my natural hair in all of its glory.

That's why in college, after I had shorn my permed tresses to grow a springy, coily Afro, I decided to loc my hair. Of course, the decision came with great trepidation and wasn’t taken lightly, seeing as it's a permanent style. But after thinking about who I wanted to become as a woman, and doing some intense research on the meaning of locs in different cultures, I decided to go for it in 1995. For me, it was important to connect with the spiritual and symbolic aspect of wearing locs. I believe they held energy, and were my antennae to every positive and negative experience I encountered during the time I wore them. As a black woman, I know my hair doesn't define me, but it is a solid reflection and statement about who I am. My locs acted as an extension of my roots. And I proudly wore my loc’d crown for a big part of my life, until I shaved my head clean around 2010 when I was ready to start a new hair journey.

That said, while wearing my locs, I always felt a true sense of pride. Not once did I ever think it was taboo or breaking any social rules. And perhaps that's because it was so normalized in the black community.

I have been fortunate enough to never be in the position of potentially losing my job, nor was I ever held back from advancing in my career, because of my hair. But I have always dealt with mentally exhausting microaggressions that came along with having locs, namely from white co-workers who believed it was appropriate to talk about my hair in the office. There were times when they would mistake my locs for braids, or ask questions like, "How did you do that with your hair?", "How many times do you wash it a week?" or "Why don’t you want to take it out?"

While these questions were not only ignorant, but also tremendously offensive, other women I spoke with say they've feared their locs could have stopped them from moving forward in their careers altogether. Toronto-based writer Sajae Elder shares that when she was interning at an entertainment company several years ago, her boss boldly told her that he was OK with her hair, but she may have to think about cutting her locs when she was ready to move on. "He said it might come down to me having to get rid of my locs to 'close a deal' because of the stereotype it represents to some people and the potential of my hair making people uncomfortable," Elder tells me, sharing that the interaction left her feeling self-conscious about a style she loved. "One year after I left my internship, I still felt hyper-aware of that conversation as I looked for jobs. Even when I went in for interviews, it was always apparent when a company had a 'look' and that I didn’t fit whatever that was."

Still, Elder refused to change her hair to fit in with any employer. She has since gone on to become a successful freelance music and culture journalist, traveling the world to cover stories for publications like Complex, Bashy, and The FADER. And she proudly wore her locs for five years before making the personal decision to comb them out this year to embrace her 4C Afro.

But as far as the new NYC law goes, Elder, who is now 30, mentions that it's left her feeling conflicted. "I'm grateful, but also upset that natural hair wasn't already protected," she says. "Between people’s false assumptions that black people don’t wash their locs or others seeing afros as unkempt, it was so simple for people to justify their discrimination, because it was protected by law. That’s pretty scary for anyone who's outside of New York City."

According to theTimes report, these guidelines are thought of to be the first of its kind in the U.S., as there is no other legal precedent known that has been put in place for the protection of hair. Without the risk of legal repercussions, discrimination against people with natural hair is easier to justify.

Much like Elder, while I certainly welcome the new guidelines, I also find myself having a hard time fully celebrating, considering black people should have always been granted the freedom to wear their hair in natural styles. It’s stressful enough trying to seek employment as a person of color — and adding the hair factor to that is a lot of extra weight to carry. But I'm glad that people in New York will now have the chance to freely wear their Afros and locs to work, every day, without the fear of losing their jobs because of their hair. In the grand scheme of things, this is a clear victory for us all.

Looking forward, I do hope other cities — and more importantly in smaller towns where the black population is largely underrepresented and sometimes segregated — take heed and follow NYC's example. It’s imperative that people around the globe see beyond the veil of discrimination and do what’s necessary to be inclusive of all humans and their hair, whatever form that may take.